For many IT professionals, Security+ is their first exposure to planning facility security.   Comprehensive, layered security is always the best solution. With unlimited resources you can place cameras everywhere, key or card access systems at every door, signage throughout a facility, frequent training and user education, security guards, secured guest and public meeting areas, or even remodel a building with the latest security features.  Given limited resources, the placement of security features can be a challenge.

The defense in depth model (shown below), identifies physical security as the secondary layer of security. Physical security includes all of the elements necessary to secure a business site. 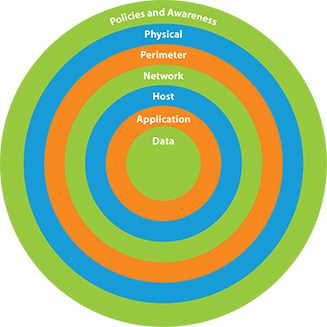 When making decisions regarding the selection and placement of physical controls, four control types should be considered in succession from the outermost to inner most locations of the business facility.

The real world seldom mimics the ideal. Test candidates that rely on their experience or exposure to physical security controls may struggle to place physical controls in the ideal location when prompted on the exam.

Although real world scenarios do not always accommodate the perfect layout of a facility, Security+ exam scenarios are designed to afford ideal implementations. For instance, the data center or server room should always be placed in the centermost portion of the facility, with solid walls, floors, and ceilings other than HVAC access. Central placement of the data center protects the most important data components (the core of the defense in depth model).  In the real world, placement of the data center or server racks is often an afterthought that follows the placement of office spaces. Although glass windows and doors make for an excellent promotional display of a company’s technology, they are considered to weaken security rather than a control that allows attack detection.  When you are asked about facility layouts on the Security+ exam, always place the datacenter within the core of the building. Consider employee safety and security over employee comfort and convenience.

Deterrent controls include fencing, barriers, video surveillance, proper lighting, on premise security officers, and signage. Place as many of these as possible exterior to the building.

Detective controls include alarm inducing systems (smoke, fire, door sensors, motion detection, glass breakage, pressure plates and door magnets), access lists and sign-in sheets, and potentially a guard monitored sign-in desk. Video surveillance systems may be used for detection, though are slightly weighted toward deterrent use on the exam.  Door access controls that include identification or authentication systems, including keyed access and proximity card readers are considered detection systems. The use of door access controls commonly separate public areas from employee accessible areas of the facility.

Remembering that incidents include natural and accidental system or business disruption, compensating and corrective controls are more commonly associated with response to related outages. Examples include UPS, component redundancy, and generators.

In addition to controls listed within the SY0-401 objectives, you also need to consider placement and configuration of wireless access points to prevent war-driving, access to Wi-Fi Protected Setup (WPS) pins, and unauthorized connection by authorized visitors.

There are several specialized physical controls whose placement is predicated upon their purpose rather than classification:

When you encounter a question about the placement of physical security controls, start either from the perimeter and work your way inside, or the core of the building and work your way to the outside. Place your specialized controls based upon building layout.

This approach will serve you well on the exam and in the real world.

Video transcription Steve Fullmer: In our Windows training courses, we often share information about the Windows 8.1 Mobility Center. Mobility Center was introduced for mobile and laptop devices in Windows 7. It’s present and somewhat enhanced in Windows 8. Since we don’t have mobile devices in our classrooms, I decided to take a little bit … END_OF_DOCUMENT_TOKEN_TO_BE_REPLACED