After receiving yet another reference to the DoYouRemember? web site, and a question about my ability to identify a Commodore 64 workstation sitting in a co-worker’s office, I have decided to defend my age.  (Please stop baiting my memory … one day I actually will start forgetting details … and blaming the problem on random people that I do recall.)

The technology timeline has become a common issue in the CompTIA A+ and Security+ courses that I deliver.  Although CompTIA objectives do not include any ‘history’ requirements, candidates are expected to recognize the evolutionary sequence of operating systems.  I have actually had students suggest that Windows XP was introduced in 1981 along with the first personal computer.  Ouch!  I also regularly provide a brief history of Internet evolution and encryption systems as a means to describe the growing complexity we face as information technology professionals.

If you plan on a successful career within the IT industry, it might help to recognize some history.   Context might also help you to understand the technology rather than merely memorizing test answers.

In that light, here are some dates and references that might serve you well, along with several totally random dates and factoids associated with the evolution of computer technology merely for your reading pleasure.

~80 BC Julius Caesar’s use of substitution ciphers is one of the first recorded uses of symmetric cryptography (although it is known that other ciphers preceded this time period, this is the first documented use.)

February 23, 1918 Arthur Scherbius patents a mechanical cipher machine based on rotating wired wheels.  This becomes the basis for the German ‘enigma’ machine.

1936 Alan Turing invents the Turing machine, the general principle behind a Central Processing Unit – an automaton capable of enumerating a language or code.

August 6 and August 9, 1945 nuclear weapons dropped on Hiroshima and Nagasaki, Japan.  Awareness that an electromagnetic pulse would restrict prevalent military communication methods inspires research that leads toward development of ARPANET.

April 19, 1965 Gordon E. Moore predicted that the number of components per integrated circuit would double approximately every two years.  Referred to as ‘Moore’s law’, this prediction has held true for almost 50 years.  Current (2016) studies in physics identify that Moore’s law, which is more of an observation anyway, is breaking down due to the laws of physics associated with silicon technology.

1973 Clifford Cocks develops the first asymmetric cryptography system while working for the UK intelligence agency GCHQ  (does “Q” sound familiar to anyone?) , although it was not declassified until 1997.

1975 The MITS Altair 8800 is introduced as the first personal computer, available as a kit, using the Intel 8080 CPU.

1975 Xerox files Ethernet patent based upon work inspired by Robert Metcalfe and his 1973 ALOHAnet PhD dissertation.

1981 The National Science Foundation (NSF) funds the Computer Science Network (CSNET) to link to ARPANET and create a network of networks (the foundation of the Internet).  The combined network eventually called NSFNET.

1986 NSFNET establishes supercomputing centers by connecting several universities (the Internet infrastructure is finally just being built.)  This leads to the decommissioning of ARPANET in 1990.

1993 Intel introduces the 60 MHz Pentium (released with a math bug that required a later recall), and Apple discontinues the Apple II line.

1993 Banking industry establishes first commercial use of Internet for business-to-business use.

2001 Intel reaches 2 GHz with the Pentium 4, and introduces the Itanium as the first 64-bit CPU. 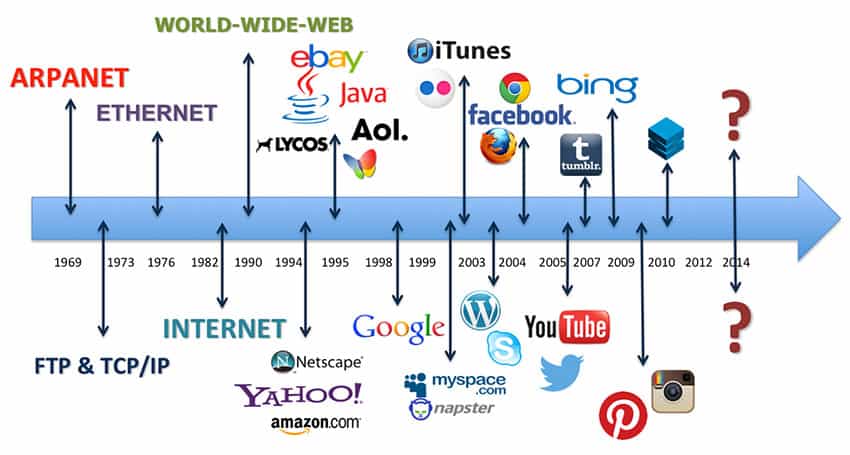 For a media and Internet business perspective, I borrowed a marketing perspective from Malone Media Group that yields a great visual of major Internet product offerings.

My short review should get you up to speed.  Maybe you can create the next major entry?

CompTIA Security+ What Motivates People to Take Your Intellectual Property?

CompTIA Instructor Steve Fullmer describes the importance of getting Security+ Certified. Security is no longer about the “haves” and the “have nots” a small group of people who are trying to take advantage of your possessions and intellectual property (IP). In the book ‘Tribal Leadership’ by Dave Logan, John King, Halee Fischer-Wright, they discuss the stages of … END_OF_DOCUMENT_TOKEN_TO_BE_REPLACED

Video transcription Steve Fullmer: In our Windows training courses, we often share information about the Windows 8.1 Mobility Center. Mobility Center was introduced for mobile and laptop devices in Windows 7. It’s present and somewhat enhanced in Windows 8. Since we don’t have mobile devices in our classrooms, I decided to take a little bit … END_OF_DOCUMENT_TOKEN_TO_BE_REPLACED

In this video, you will gain an understanding of Agile and Scrum Master Certification terminologies and concepts to help you make better decisions in your Project Management capabilities. Whether you’re a developer looking to obtain an Agile or Scrum Master Certification, or you’re a Project Manager/Product Owner who is attempting to get your product or … END_OF_DOCUMENT_TOKEN_TO_BE_REPLACED