Although CompTIA exams are heavily based upon the published exam objective s, CompTIA tends to expand target material by exposing candidates to potential content on their certification exams. Although such questions are not supposed to count toward the exam score, they can be particularly disconcerting – and if they occur on one of the more time consuming simulation questions also rather disruptive to the candidate’s focus.

Since the exam objectives may lag technology introduction by three years or more, you may find it beneficial to consider technology extensions to existing exam objectives during your certification preparations. In that light, I will be providing a growing series that introduces new or potentially expanding content. Starting with this blog covering RAID technologies.

CompTIA 202-801 objectives under 1.5 Install and configure storage devices and use appropriate media list:

RAID 6 is essentially an extension of RAID 5, except that it provides a second parity block enabling recovery after the simultaneous loss of two disks. While you could therefore create a RAID 6 array with only 3 disks, this would yield one data and two parity drives (and a rather significant waste of space/equipment). The minimum recommended number of disks for RAID 6 is therefore four. The four disks would therefore be composed on block level striping with two parity blocks distributed across all member disks.

For a quick review of RAID Types:

Two disk minimum, although additional disks may be used. Data is striped evenly across the disks without parity information. RAID 0 provides no redundancy or recovery options if any disk in the set is lost. RAID 0 is designed to enhance performance since the data may be retrieved simultaneously from the multiple disks in the array. Storage space is limited to the multiples of the smallest disk in the array times the number of disks in the set. Recall that data is striped evenly, so the space used across all disks in the set will be equal. 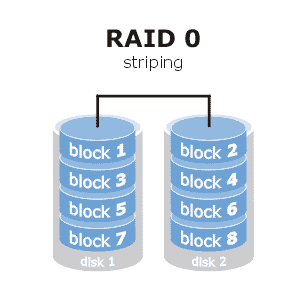 RAID 1 is typically called a mirror. Two or more disks may be in the array, although most configurations use only the minimum 2 disks. All data is mirrored across both disks without parity, striping, or spanning. RAID 1 provides reliability and recovery, and may enhance read performance since data is duplicated across the disks. Write performance occurs on a per disk basis, so no performance gain is acquired during disk writes. Mirror capacity is restricted to the size of the smallest volume in the array. 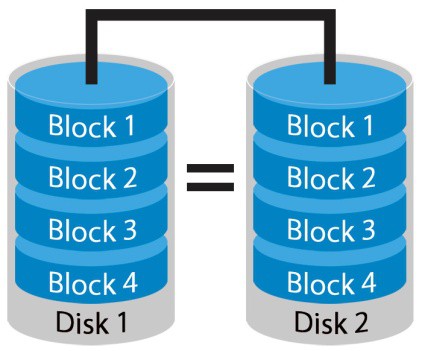 RAID 5 uses block level Striping and requires a minimum of three disks. Additional disks may be used. Recall that a typical drive controller supports only two devices, so your system requires RAID enabled drive controls and compatible BIOS to enable creation of a RAID 5 array. Since the parity blocks are distributed across all the disks, loss of a single disk enables continued operation or recovery. Reads and recovery may be calculated from the distributed parity such that no content will be lost. It is still recommended to replace failing, damaged, or lost disks quickly to retain the integrity of the data across the array. Read performance may be enhanced since all members of the RAID 5 set participate in data read response. A calculable amount of total disk space across the array will be dedicated to the parity striping, reducing the amount of available data storage across the array. Space loss is less than half the total drive space, and reduces as additional drives are added to the array. 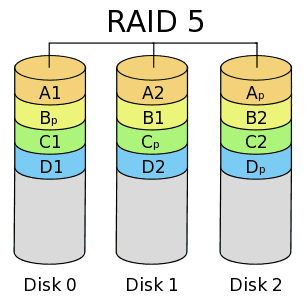 RAID 10 requires a minimum of four disks, striping the data across mirrored pairs. Look at the ‘10’, which stands for 1+0. The data is first mirrored across two disks, and then the content is stripped across the secondary disk pair. Just like RAID 1, you lose half the available storage capacity of the array. You gain high read performance since the data is available across the array. RAID 10 is considered a fast way to provide both recoverability and performance for the cost of a few additional disks. You need software and drivers capable of RAID 10 support for implementation to work. 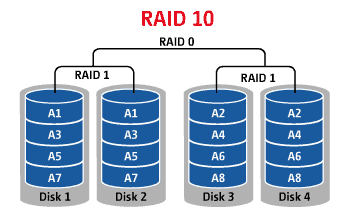 Thus, recapping RAID 6, you are performing Striping just like RAID 5, though extending the parity by placing two parity blocks across the entire array. Doubling the parity blocks means that you can lose two drives in the array and still read or recovery the data from the drives. Just like RAID 5, you need a system with device controllers, device drivers, and enabled BIOS in order to implement a RAID 6 array. 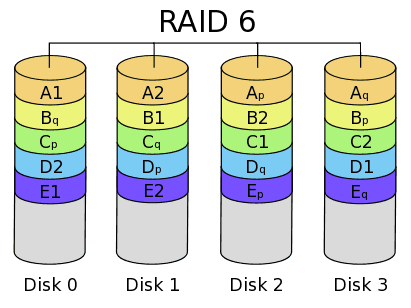 More people implement RAID 10 currently than RAID 6. With RAID 10, loss of 2 disks is also recoverable, although there is a 1/3 chance that you will lose two with the same stripe. With RAID 6, you guarantee against the loss of any two drives.

Having checked several forums and online discussions, RAID 6 is a new and less well understood technology, with multiple arguments regarding best practices implementing RAID 6. For instance, it may make sense to implement RAID 6 with only 3 disks in order to prepare for loss of two disks simultaneously, although at a significant platform and implementation cost. There are other solutions that may better prepare for recovery of device loss, including cloud storage and a variety of real-time backup solutions.

You should now have a better understanding, and preparation for that unexpected exam question.

This content is from our CompTIA Network + Video Certification Training Course. Start training today! In this video, CompTIA Network + instructor Rick Trader demonstrates how to use cable testers in network environments. Let’s look at some tools that we can use to test our different cables in our environment. Cable Testers Properly Wired Connectivity … END_OF_DOCUMENT_TOKEN_TO_BE_REPLACED

Video transcription Steve Fullmer: In our Windows training courses, we often share information about the Windows 8.1 Mobility Center. Mobility Center was introduced for mobile and laptop devices in Windows 7. It’s present and somewhat enhanced in Windows 8. Since we don’t have mobile devices in our classrooms, I decided to take a little bit … END_OF_DOCUMENT_TOKEN_TO_BE_REPLACED