Kali Linux is an ultra-powerful security tool. I use it extensively when doing Wi-Fi penetration testing, network security evaluations, and security audit tasks. It is freely downloadable from Kali.org as an ISO.

I want to get the best possible performance out of Kali. To do that, I typically create a bootable installation on a USB stick and then install from the stick to a dedicated hard disk partition. There’s tremendous reusability value in preparing an installation stick, as you can use a single stick to install Kali Linux whenever and wherever you need it.

In this blog I’ll show you how to prepare the USB stick.

Necessary Supplies Before You Begin

You’ll need a few things to get started:

Now it’s time to setup Kali on the stick!

Setting Up Kali On the USB Stick

I’m demonstrating this on Windows 7, so your mileage may vary on OS X or Linux.

First, connect the USB stick to the computer. It should go without saying that things go faster when you plug a USB 3 stick into a USB 3 port, but a mismatch won’t hurt anything.

Now run UNetbootin.exe You don’t need to install it on Windows, just double-click the executable.

Click the Diskimage radio button and specify the Kali Linux ISO that you downloaded.

Verify that Type shows USB Drive and the Drive is set to your target USB stick. These settings are shown in Figure 1. 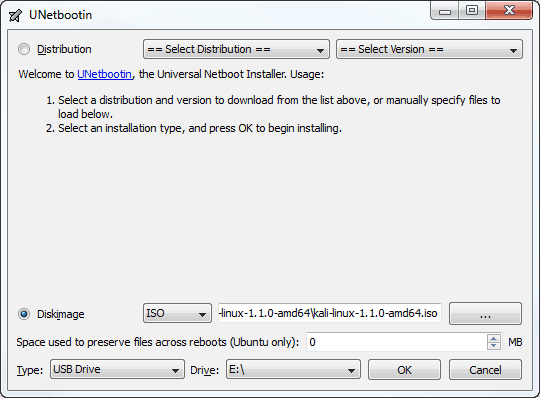 Now click OK to start the fun! You may receive an error message depending on the files already on the USB stick. For example, when overwriting a previous Kali Linux image, this dialog box appears for me:

Once I click Yes to All, UNetbootin shows the progress as shown in Figure 3. 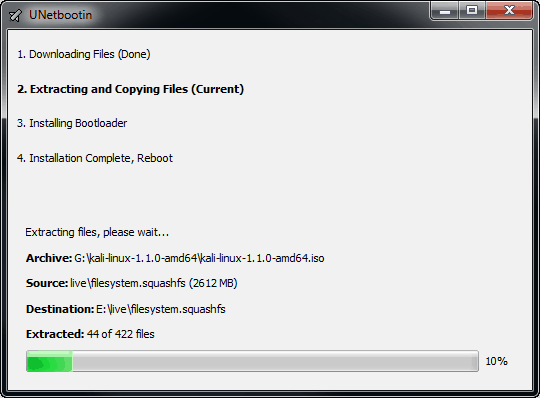 That’s about it. The process takes a variable amount of time depending on computer load, size of the ISO, and speed of the USB stick. Eventually it will successfully complete and yield a bootable drive.

This content is from our CompTIA Network + Video Certification Training Course. Start training today! In this video, CompTIA Network + instructor Rick Trader demonstrates how to use cable testers in network environments. Let’s look at some tools that we can use to test our different cables in our environment. Cable Testers Properly Wired Connectivity … END_OF_DOCUMENT_TOKEN_TO_BE_REPLACED