One of the problems that Network Administrator’s had in the past is, when using static files to do name resolution, as time grows, IP addresses change. Now they would have to go update those files.

Back in the 1970s through the early 1980s, we used to have to download what was referred to as the HOST file from the University of California in Berkeley in order to be able to resolve names on the Internet.

One of the things that made our lives simpler is to be able to use Dynamic Name Resolution Services, there’s actually two of them. 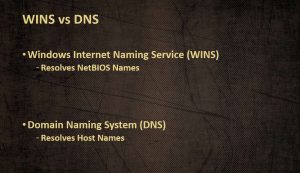 To put this in a little bit more perspective, let’s say we have computer A and computer B.

Computer A has an application on it, that’s NetBIOS stat‑based.

Computer B in order to connect to computer A, will need to resolve computer A’s name to an IP address. We can do that via that static file, with the LMHOSTS file that’s on the machine.

Then what will happen is computer A will register its IP address with WINS and Computer B is actually going to register its name with WINS.

As part of the name resolution process, computer B is actually going to check WINS and say, “Hey, WINS, do you have an IP address for a computer called computer A?”

They’re going to be able to communicate and share data with each other. This is the way WINS works. WINS is typically going to be inside of our corporate network only with inside our own organization.

For example, there are thousands of Internet websites out there, and if we’re using the host file, because this is the replacement for the host file we would have to have 1,000 entries in the host file to be able to resolve to the Internet. 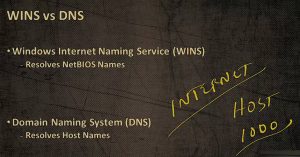 This is where DNS comes in handy. Most of the time, DNS is going to be brought into it by our ISPs. We can be able to resolve those hosts‑based names to an IP address. Let’s put into perspective how that works.

This is a little home computer, office computer or corporate computer. And then on the left is a web page out on the World Wide Web.

What we will need to do is make this machine here, a DNS client.

Through some mechanism, this machine has to register itself in DNS.

The DNS client resolves the IP address and performs a three‑way handshake to that client machine.

We have the Windows Internet Naming Service files going to replace the LMHOSTS file.

The DNS server is going to replace the hosts file to make our lives a little bit easier, a lot more enjoyable, so we can go home at night instead of having to stay at work and update these files.

This content is from our CompTIA Network + Video Certification Training Course. Start training today! In this video, CompTIA Network + instructor Rick Trader teaches how to create Dynamic DNS zones in Network Environments. Video Transcription: Now that we’ve installed DNS, we’ve created our DNS zones, the next step is now, how do we produce those … END_OF_DOCUMENT_TOKEN_TO_BE_REPLACED

Video transcription Steve Fullmer: In our Windows training courses, we often share information about the Windows 8.1 Mobility Center. Mobility Center was introduced for mobile and laptop devices in Windows 7. It’s present and somewhat enhanced in Windows 8. Since we don’t have mobile devices in our classrooms, I decided to take a little bit … END_OF_DOCUMENT_TOKEN_TO_BE_REPLACED