I use Kali Linux extensively when doing penetration testing and security assessments. Besides being fast, Kali Linux has pretty much every security tool I need built right in. On top of that, it’s free!

Another benefit, the topic of a previous blog, is that Kali Linux is easily installed on and run from a USB stick. But you can also build a bootable USB stick that will install Kali Linux onto a desktop or laptop’s hard disk. Here’s how you can make your own bootable Kali Linux installer on USB.

First, gather the necessary supplies. These are:

Before mucking with the software I insert the USB stick in the PC and make sure it is recognized. I also remove any other USB or removable media to prevent mishaps.

Next, I fire up Win32 Disk Imager. Yes, I know the name implies Windows, but this powerful little tool works quite well for Linux too. 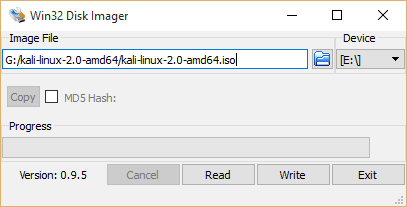 It’s got a lovely clean interface! Notice how it found the USB stick mounted as drive E on the right side.

Now I click the blue folder icon to the right of the Image File box. This opens a file browse window. I browse to the downloaded Kali Linux ISO and click OK.

Special note: If the ISO doesn’t appear on the file list, drop down the file type and choose *.* because, by default, Win32 Disk Imager only displays IMG files.

Now insert the USB stick in the PC where you want to install Kali Linux and start it up. When prompted, choose to boot to USB. If you’re not prompted, you may have to configure the computer’s BIOS to enable USB boot.

When booted, the Kali Linux USB installation provides this menu: 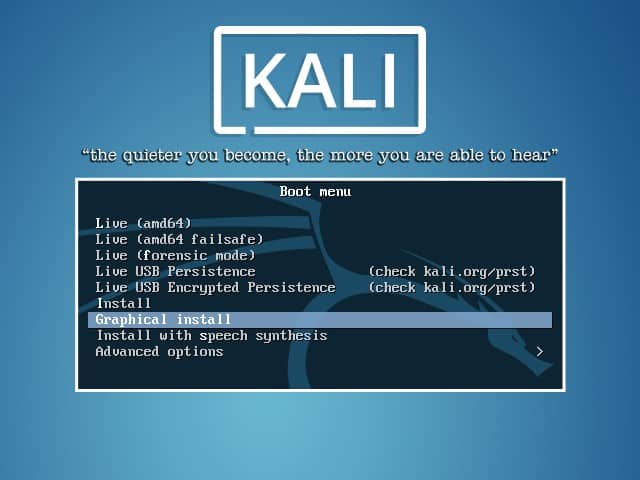 Now uses the down arrow to move the selection to Graphical install. This begins the Kali Linux installation process where you can choose volumes, create partitions, etc.

As a lovely extra benefit you can also select Live or Live USB Persistence to run Kali Linux entirely from the USB stick without installing it. Your choice!

This content is from our CompTIA Network + Video Certification Training Course. Start training today! In this video, CompTIA Network + instructor Rick Trader demonstrates how to use cable testers in network environments. Let’s look at some tools that we can use to test our different cables in our environment. Cable Testers Properly Wired Connectivity … END_OF_DOCUMENT_TOKEN_TO_BE_REPLACED

Hi, my name is Mike Danseglio. I’m an instructor here at Interface Technical Training. I want to talk a little bit about encrypting USB flash drives with Windows 10. The concept of protecting data when it’s on a USB flash drive is not a new concept. BitLocker 2-day instructor-led training is now available at Interface: … END_OF_DOCUMENT_TOKEN_TO_BE_REPLACED

Video transcription Steve Fullmer: In our Windows training courses, we often share information about the Windows 8.1 Mobility Center. Mobility Center was introduced for mobile and laptop devices in Windows 7. It’s present and somewhat enhanced in Windows 8. Since we don’t have mobile devices in our classrooms, I decided to take a little bit … END_OF_DOCUMENT_TOKEN_TO_BE_REPLACED