Planned Value – A simple explanation for an Earned Value concept

Planned Value – A simple explanation for an Earned Value concept

One of my students regularly applies Project Management topics as a means to reinforce the lessons. Earned Value Management (EVM) is a simple and powerful tool, albeit seldom applied. EVM is most often applied to large, complex projects particularly with a technology focus.  An overview of EVM was published in the first edition of the PMBOK® in 1987. EVM rose to prominence during the 1990’s when applied to highly publicized U.S. Government procurement efforts by the Department of Defense, NASA, Department of Energy.  EVM earned additional visibility with the passage of the Sarbanes- Oxley Act of 2002.  EVM is regularly applied to development or procurement projects within industrialized nations.

Though as I teach in the classroom (and PMP Project Management videos) you can apply the basic principles of EVM to projects of any scale.

The question that prompted this blog:

‘There is simply no better way for me to understand the results and the process then for me to just put it into practice and do it. Therefore, I have a question. I understand what planned value (PV) is – from the books we got from Interface TT “What you expect to spend on the work that you completed at this time. Also – What you expected to earn if the project was executed precisely to plan.” While the definition seems very straight forward, I am trying to figure out how to get that information and that doesn’t seem so straight forward. Meaning…………..

But, if I don’t do that and I use project data….how do I really get PV? it seems as though this could be a value that you could obtain from the project data uniquely, but because it has EV in the calculation, I am not so sure. This is what I am curious about. Do you have any suggestions?’

PV is actually the very easiest value to determine for a project – if you have planned well.

For each dollar you PLAN to spend, you PLAN to acquire one dollar of Value. So planned spending over time is also planned value over time. The planned VALUE is nothing more than a point exactly on the S-curve at each point in time (T). PV is ALWAYS just a point on the S-curve. If you didn’t create an S-Curve for your project, then you cannot calculate PV, and you cannot use Earned Value Management as a monitor and control tool. 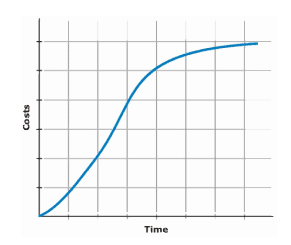 Just like the exercise in class, you merge knowledge about the PLANNED schedule and the PLANNED budget to estimate or PLAN spending relative to time. 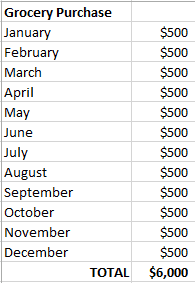 To develop the S-Curve, you plot the spending on the time line, recognizing that from a planning perspective you can only allocate money when you PLAN to do the work, and will PLAN to get the same VALUE for each dollar you spend. The shape of the spending pattern per time period needs to match the shape of the Precedence diagram you created in the schedule.

And from the Total Cumulative cost you plot the S-Curve. 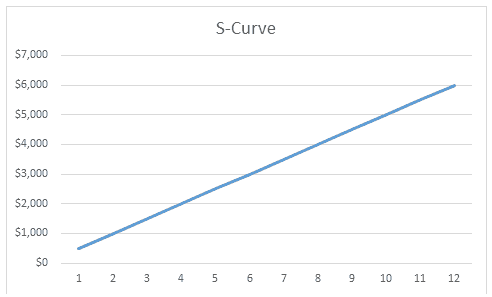 The S-curve looks like a straight line unless you calculate more for holiday months (Nov-Dec), birthday celebrations, etc. But for the sake of discussion, let’s say an even $500/month. Therefore PV for January would be $500. PV for February would be $1,000. You would add $500 per month to create the curve.

The money you actually SPEND may be higher or lower. That is called the ACTUAL COST (AC).

We would be comparing our planned (PV) versus actual dollars expended (AC), if all we did was compare against the line item budget. We NEVER do this for a well-managed project. You need to know whether you acquired the groceries you actually NEED to serve your monthly food requirements.  So Earned Value might be the dollar value of your purchase, but it might just as easily occur that you used a coupon so that Actual Cost is lower than the value you Earned for the period. Or the price of milk and bread might increase one month, or your typical brands aren’t available and you need to purchase a higher cost option one month – that would be higher than your Plan, but you get to recognize the Value you associated with the purchase as EV, and the Actual Cost you spent for the higher cost milk and bread as AC.  The AC you spent would then be more than your Plan (PV) but you would recognize the value relative to your Need as Earned (EV).

Through all of this AC and EV may fluctuate, but PV NEVER changes once you have a time based spending plan – called the Cumulative Cost or S-Curve.

It really is that simple. PV is your plan. Nothing more. Nothing less.

As students prepare for the Project Management Professional (PMP) Certification, one of the areas upon, which there is an intense focus, perhaps we’ll call it a volume of questions is Procurement. In the classroom, I teach the Procurement as a great way to think about project management, by simply taking your ball cap and turning … END_OF_DOCUMENT_TOKEN_TO_BE_REPLACED

In this video, you will gain an understanding of Agile and Scrum Master Certification terminologies and concepts to help you make better decisions in your Project Management capabilities. Whether you’re a developer looking to obtain an Agile or Scrum Master Certification, or you’re a Project Manager/Product Owner who is attempting to get your product or … END_OF_DOCUMENT_TOKEN_TO_BE_REPLACED