After recently having the privilege to serve as the keynote speaker at a recent series of Project Management Institute dinner meetings, I was asked to share and expound on some of the key elements from my presentation. Project Management Professionals® study motivational theory while preparing for their credential examination, though not the evolution of motivational theory, current contributions or its direct application to creating change.

We need to remind ourselves that change is about perception and that leadership is often counter-intuitive. ( As suggested by David Viney’s J-Curve). Projects are about the new, the temporary, and the unique. The goal is to improve …. Something. This implies the status quo is insufficient, yet the unknown raises fears, creates uncertainty, and the destination rarely matches the imagination of the creator. Neither the real nor the perceived cost are taken into accurate account. We need to lead both the provider and the recipient through the wilderness to a desired outcome with limited resources. We often need to create a new vision or perspective of reality along the way. Project managers often need to be the scout, the cartographer, the wagon master, the shaman, the soothsayer, the quartermaster, the cook and the bottle-washer all rolled into one. 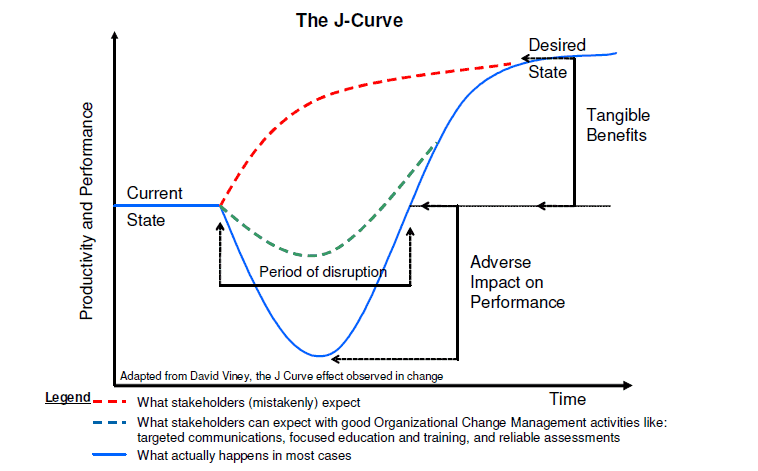 As project managers, we must be change agents and far more often serve as leaders than mere process managers. We are not what we know, as much as whom we can help others to become or what we can assist others to achieve. The effort is less about process than testing implies. We live on a particularly needy planet. And project management is about helping others to meet new or challenging needs. Neediness provides project managers the opportunity to assist with change both on and off the job, simultaneously becoming better leaders and project managers. Project managers are needed within every culture – whether the culture is societal or corporate. Cultures create environments and influence perceptions. The style of the stakeholder matters more than that of the leader. Integrating all these concepts into successful application can take a lifetime of personal effort. Just as project focused change can be uncomfortable for project stakeholders, the path to lasting personal change toward exceptional leadership is seldom an easy one. Being a PMP(r) is far more than certification and understanding. It is a commitment to lifelong personal learning.

The attempt to understand personal motivation and leadership is barely a century old. Yet we have attempted to follow it like a well-trodden path. It isn’t.

Prior to 1900, craftsmen performed most specialized work. Experts introduced change, and apprenticeship was a required career element before one could earn the privilege to introduce new ideas. Most people worked hard just to survive. Except for aristocracies and generational merchant families, wealth and its associated freedoms came only at the end of a long lifetime of perfecting one’s craft. Workers created goods or services as the means to survive, and there were defined paths for advancement and opportunity. Early during the 20th century, automation replaced traditional societal evolution. Craft skills and knowledge were captured and converted to automated processes. The common man could now produce output once limited to master craftsmen. Automation provided a shorter path and the wealth for the common man to acquire the freedoms of the craftsman without the effort or the life commitment. An appreciation for the challenge of the path was often lost in the process. Achievement was acquired through automation and process rather than intended action.

Frederick Taylor recognized the change, and introduced the first theory of management that analyzed workflows. He also recognized the change in working environments and worker perception, a shift toward productivity rather than unique skills, and pay for contribution. Craft production changed the perception of work value, motivation, and the transfer of knowledge and goods. He also raised questions about the value of man, and of work, including an identification that part of the population might not have value through a failure to change and contribute. An entirely new value perspective was introduced, and the ramifications were totally unknown. 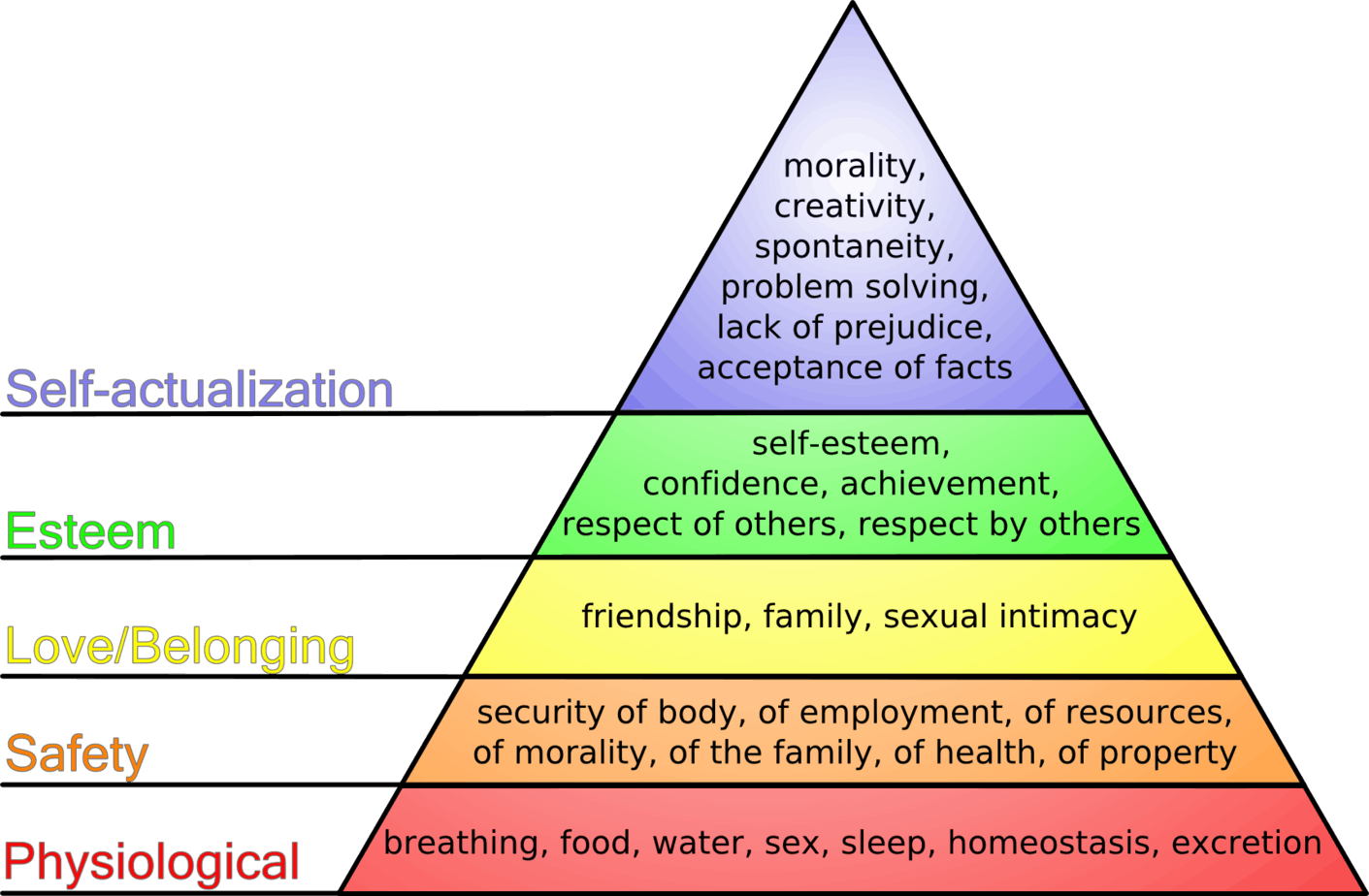 We have been attempting to understand motivation and productivity as patterns for the past century as a means to enhance worker output and management. Maslow introduced his hierarchy of needs, and the concept that the greatest human contributions are achieved through self-actualization. His model accounts for human motivation and explains human needs that evolve with growth. Although Maslow’s theory has business application, it was intended as a broader analysis of the human condition. The pinnacle represents the freedoms achieved through a lifetime of effort. The model provides a goal for achievement, a goal that millions rather than hundreds could now hope to achieve. It served as a roadmap, but does not clearly cite the beginning, end, or the effort required.

Herzberg introduced the concept that multiple patterns might overlap. Satisfaction and dissatisfaction factors act independently, not as a continuum like Maslow’s needs model. Herzberg’s model, and his book The Motivation to Work, changed the way managers might understand workers, and suggested they should be influenced to work by affecting their environment and compensation. The theory dismisses personal perspective and goals as being contrary to or inappropriate for business goals. The approach, extremely valid, even takes into account the concept of changing perception in motivation. Herzberg’s model brought us a step further in the design of business or work motivation, though lacks elements of personal evolution. 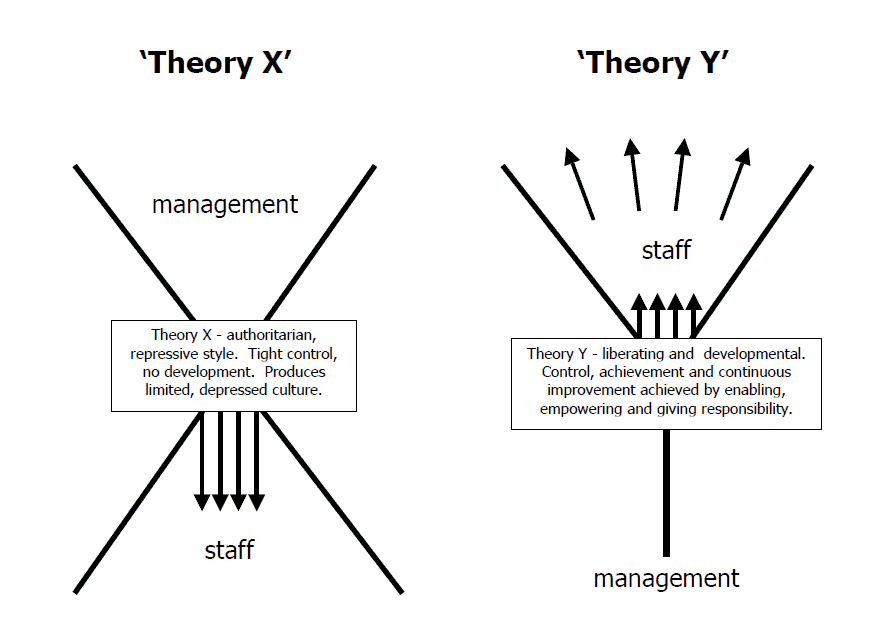 McGregor also introduced a working model of patterns with bipolarity. Theory X and Theory Y. Rather than focusing on employee behaviors, he focused on the perceptions that managers’ hold. And the perception based actions directed toward their employees that in turn influence productivity. Early in the development of his theory he focused more heavily on the results produced by Theory X managers on workers. Theory X is not always harsh, but is always controlling – of the environment, the behaviors, and the outcomes. Interpretations suggest that Theory Y efforts can only be applied to professionals, senior managers and leaders. They are difficult to implement amongst workers. Late in his career, having taken the time to study and experience many forms of success and failure, he sided with Maslow (a contemporary) in the belief that self-actualization leads to greater contributions. The evolution of his thought process itself suggests that personal growth is a long-term path requiring effort, success, failure, conflict, and commitment.

McGregor and Maslow ultimately agreed that motivation is about supporting people toward attainment of their goals – self defined needs and wants. And that such efforts require minimally an understanding of the people you lead. As these social psychologists moved into retirement, the studies and publications of W. Edwards Deming came to the forefront.

Deming’s continuous improvement model identified a method to measure products and productivity. They provided a guideline for work that did not rely on a deep understanding of the diversity of mankind. Production and project efforts swung back toward process and measurements. Hard rather than soft characteristics. Personal motivation was still a concern, however. Deming’s work brought attention to the research of Dr. William Ouchi. Dr. Ouchi created Theory Z while serving as a business professor at Stanford University. Theory Z is influenced by McGregor’s Theory X and Y, minimally in the use of terminology and framework. Ouchi’s studies focused on Japanese business practices identified by Deming. He incorporated the attitudes of workers along with those of managers within his theory, raising an awareness of “Wa” or Japanese corporate culture. The works of Deming and Ouchi induced an attempt to recreate the teamwork culture shown to be so successful in Japan.

By the late 1980’s or early 1990’s, efforts to emulate Japanese success by creating or influencing corporate culture had vastly failed. (Subsequent research suggests that most efforts lacked the historical social and environmental factors that contribute to Japanese success with respect to corporate cultures.) Supporting people is paramount – community and culture – we neither travel nor arrive alone – yet both community and culture must exist for productive success.

We did not understand.

Next installment: New forms of analysis arise and clearer perspectives evolve. Beyond Self Actualization: Leading Change

Video transcription Steve Fullmer: In our Windows training courses, we often share information about the Windows 8.1 Mobility Center. Mobility Center was introduced for mobile and laptop devices in Windows 7. It’s present and somewhat enhanced in Windows 8. Since we don’t have mobile devices in our classrooms, I decided to take a little bit … END_OF_DOCUMENT_TOKEN_TO_BE_REPLACED

Project Management (PMP) Leadership Skills in the 21st Century … Do you Know Your History? – November 10, 2017

The PMI Leadership triangle touts our need to develop our knowledge and application of leadership. Do you understand the leadership models of the 20th century? The 21st Century? Understanding your predecessors can assist to set your future course. On the matter of history, Mark Twain’s quote “History doesn’t repeat itself, but it does rhyme” is … END_OF_DOCUMENT_TOKEN_TO_BE_REPLACED

As students prepare for the Project Management Professional (PMP) Certification, one of the areas upon, which there is an intense focus, perhaps we’ll call it a volume of questions is Procurement. In the classroom, I teach the Procurement as a great way to think about project management, by simply taking your ball cap and turning … END_OF_DOCUMENT_TOKEN_TO_BE_REPLACED