The Concepts of Switching in CompTIA Network +

Home > Blogs > Cisco > The Concepts of Switching in CompTIA Network +

The Concepts of Switching in CompTIA Network +

Let’s explore the actual movement of data across the wire. That concept is actually associated with the device called the switch.

We want to define what a switch is. Especially, you don’t want to go to a job interview, and that’s the first time you ever see an actual switch. A switch is a device that learns MAC addresses and then moves frames. We start with bits and then frames which turn into packets. A switch works with frames.

Switches both physical and virtual switches move frames. I like to imagine a switch to watching a program about this creature called the trapdoor spider. Matching its name, it would build a trapdoor out of sand and webbing, and then hide under it. If something consumable went by, it would jump out and grab it and pull it back in. In other words, it didn’t go hunting. It waited for something to come to it. That’s how a switch operates.

Let’s say that I have a MAC address. We’ll shorten this up so I don’t have to write so much.

Right now, the switch is that trapdoor spider. If I have just plugged this switch in, it’s sitting there doing nothing. It’s not going to go hunt for some data, it’s going to wait.

(A) doesn’t know where (B) is. (A) sends out this frame. It gets to the switch. One of the pieces of information that’s here is, “I know my own MAC address,” so when it transmits this frame the switch grabs it.

This switch sees the frames and like the trapdoor spider, the switch says, “Ooh, something just showed up. I just got a frame. It’s on port 1. It’s from MAC address (A). Let me write that down in my table”.

So now the switch records in its table on port 1, it now knows about MAC address A.

At this point, that’s the only MAC address this switch knows, so he says, “What can I do? I’ll just send this to everybody.” In this network, everybody is only B. Imagine if there was other PCs plugged in, they would all get a copy of this. 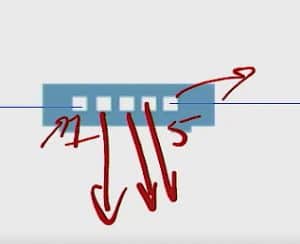 In other words, you can imagine that as a default behavior. If the switch and gets a frame and doesn’t know the destination MAC address, it will just throw a copy to everybody and suggest, “If you’re out there, please answer…”

It turns out that (B) was the intended recipient so MAC B replies.

Now, the switch has learned the two MAC addresses of the only two residents of this network. This is how a switch does its job, it listens and learns MAC addresses. Then it move frames based on destination MAC addresses.

I could have multiple users on that switch all sharing a pipe out to the Internet. Switching is a very useful concept in networking.

In this video, you will gain an understanding of Agile and Scrum Master Certification terminologies and concepts to help you make better decisions in your Project Management capabilities. Whether you’re a developer looking to obtain an Agile or Scrum Master Certification, or you’re a Project Manager/Product Owner who is attempting to get your product or … END_OF_DOCUMENT_TOKEN_TO_BE_REPLACED