In my last Windows 10 blog I had just installed the operating system using an ‘in place upgrade’ from Windows 8.1. Several of the desktop features appear to be residue from Lenovo and my Windows 8.1 environment, although there is a clear difference. 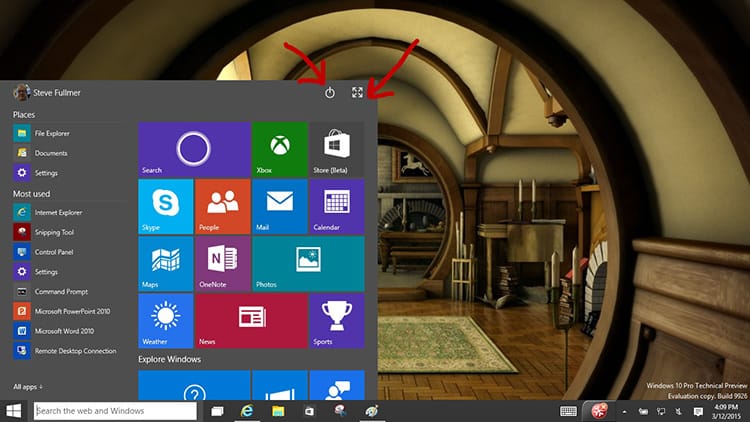 I then decided to find the equivalent for one of my favorite Windows 8.1 features. Would they take away one of the few powerful additions in Windows 8.1? Yep. You can no longer merely type commands while on the desktop or Start Menu. They did provide a near equivalent, however. The search feature is now permanently a component of the task bar. Windows 10 preview also installs with Task View, Internet Explorer, File Manager, and Store (Beta) pinned to the task bar.

During announcements in September and October, 2014, Microsoft shared that Windows 10 would support multiple virtual desktops.  My MacOS X system has a comparable feature, and I could find the feature on Windows 10 using the proposed Windows+Tab keys. I do not yet, however, have sufficient applications or Store Apps to test the feature, so I am tabling this for another day (and a later blog).

Windows+Tab once enabled the stacked, offset display of running applications in Windows 7. This functionality has been replaced with Task View. Task View may be launched from the task bar or by using the Alt-Tab hot key combination. Once I had launched the few applications on my system, Task View works nicely, albeit as a flat, side-by-side display of all running applications. I hope this changes to the more richly presented, three dimensional listing prior to final release of Windows 10. I do like that Microsoft is attempting to use common hotkey combinations for potentially popular navigation selections.

The new Start Menu, Virtual Desktops, and Task View are three of the features offered during the initial Windows 10 announcements. Present and nice, though insufficient to prompt be to migrate from Windows 7 or 8.1.

In addition to consistent application windows, the enhanced Snap feature works nicely. I can snap up to four applications on my desktop, resizing each to fit. There may be limitations, although simple side-by-side and top-to-bottom layouts appear to work easily.

As I attempt to acquire a store app or two for testing, I am immediately prompted to accept an application update. Three tries later, and I have the new Store Application service updated. The system prompts me that it will reboot in 15 minutes, and presents a countdown timer. Interesting choice of delay. I continue to perform additional evaluations, and fifteen minutes later by system quickly restarts.

Once I restart, an action center message notifies me of the update, and I am able to acquire a simple Store Application for evaluation.

A few other differences that are immediately note worthy:

I decided to explore – with my goal toward creating a recovery drive before I break my evaluation system with limited repair options yet established. Creation of the 3.6 GB iso to an USB drive as my initial evaluation was problematic. Last week’s process insisted on a minimum 8 GB USB drive. A quest through the control panel, backup, and related options did not reveal the ‘Create a System Image’ or ‘Create a system repair disk’ options found in Windows 7. I ultimately typed Recover in the search bar and found the Windows 10 Recovery tool.  After two efforts I was able to create a small Recovery USB drive. At least for the Preview Release, you need 512 MB for a simple recovery USB drive and 8 GB for a full system recovery. I created the Recovery USB using a 4 GB stick, and then rebooted to confirm that a minimalist recovery drive is created. The recover drive is directly bootable and contains the same menu system as Windows 8.1 – supporting recovery from a restore point, boot repair, an attempted .wim repair, or full system replacement. Review of the USB contents do not reveal any .wim file, so full recovery will require a larger drive or separate .wim file and manual process.

All-in-all, no significant or major changes. The system looks like an evolutionary cross between Windows 7 and Windows 8.1 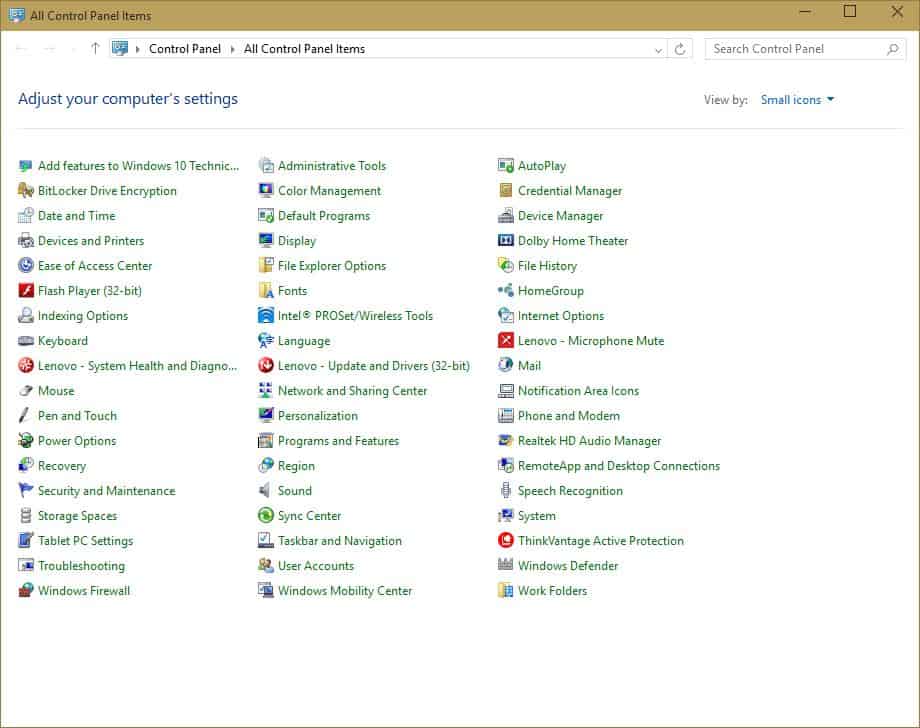 [Note: My upgrade evaluation of Windows 10 is being performed on a Lenovo Touchscreen system that shipped with Windows 8.0 and was upgraded to Windows 8.1. Several of the Control Panel items are carried over from the original Lenovo tools.]

Action Center – promoted as having vastly enhanced messaging is absent. I ultimately located the Action Center equivalent panel under Security and Maintenance, which then looks the same as Windows 7.

At a very high level, aside from a few tools unique to my touch screen system, the Control Panel is very much like Windows 7 or Windows 8 – at least in the preview release. I quickly launched several applications.  (Note: my test was neither comprehensive nor in depth, merely seeking possibly new offerings). The following list of features appears to directly mimic Windows 8.1 offerings. I launched most from the Control Panel, and a few directly from the Search bar.

Task Manager decidedly contains all of the Windows 8.1 enhancements including the process, performance, app history, startup, users, details and services tabs. Processor affinity works identically, as do redirection to the Restore Monitor and Services. 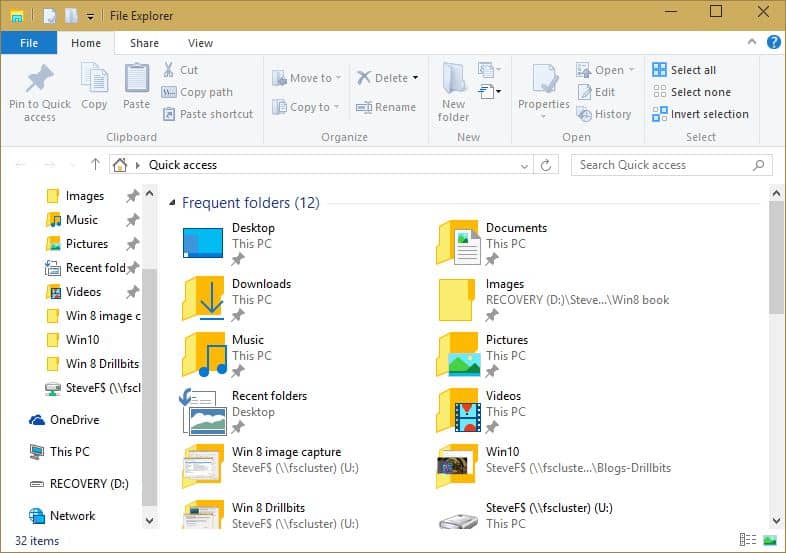 While maintaining the Ribbon bar introduced in Windows 8.1, the iconography has vastly expanded, or at least changed.

While I look forward to diving more deeply under the hood and into the mechanics, thus far the difference appears to be primarily cosmetic.

I would already select Windows 10 over Windows 8.1 for end-user support reasons. The upgrade process was fairly transparent, though I did migrate from Windows 8.1.

Microsoft promotes new and improved security and performance features. One or both might be my next adventure with the current preview version. And I still look forward to an expanded or enhanced migration and deployment toolset.

Video transcription Steve Fullmer: In our Windows training courses, we often share information about the Windows 8.1 Mobility Center. Mobility Center was introduced for mobile and laptop devices in Windows 7. It’s present and somewhat enhanced in Windows 8. Since we don’t have mobile devices in our classrooms, I decided to take a little bit … END_OF_DOCUMENT_TOKEN_TO_BE_REPLACED