Types of Topologies in Network Environments

Types of Topologies in Network Environments

Topologies are something a networking professional using when they begin setting up their environment. Therefore, it’s important to define what exactly a topology is.

A topology is defined as how the physical media links to the network nodes. From a human perspective, a topology is how does a user get to Google, Bing, or whatever they’re trying to search for on the internet. What mechanisms or technology allows this to occur?

Let’s examine some of the options.

Initial technology provided us with the Bus Topology. A Bus is a network setup where all the devices attach to the same Local Area Network (LAN) thicknet cable.

One of the downsides with bus topology is, if one node is transmitted, all devices connected to the bub topology would read the transmission. In other words, all the machines had to listen and then decide if they care about this, if they didn’t, they dumped the message. Today, a Bus Topology is not very efficient use of CPU cycles and bandwidth. 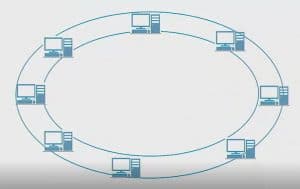 Ring topology is very obvious from the diagram above. Data travels in a ring around the circle. This diagram shows a dual ring which is common because if there was a breakage or outage, the other users will be able to continue transmitting packets. If there’s a dual ring and I have an outage, then, I can fix the issue while connectivity continues. At no time am I losing user access to the network time.

In fact, that’s one of the rules we get in troubleshooting, restore connectivity quickly and try to avoid downtime.

It’s unlikely that you’ll walk in any boardroom, or cubicle farm and see a network that’s laid out exactly the way it is in the above diagram. In fact, if you were able to peel the lid back off of a room and hover over it in a balloon. It doesn’t really look like a star.

Physically, this doesn’t look like a star but notice what gives it away, single point of failure.

A Single Point of Failure is bad from the standpoint of a network admin because if something’s going to break, your single point of failure goes down and so does everybody else is.

If you see a network diagram like this, think about the layout, there may be a widely disparate geographic regions that are far apart with many connections.

In fact, this could be a sample CompTIA Network + exam question. It would be presented as a scenario: “You’re the network admin for this company and we have five sites. We want to connect them all. What should we choose?” FULL MESH. Now the question is, “how many total connections do I need to have full mesh?”

Well, here’s option one, count them. You would need to count every possibility where the line on the diagram intersects with another line of circle. It would be easily to skips a connection or accidently count a connection twice.

Here’s a better way to find the answer: 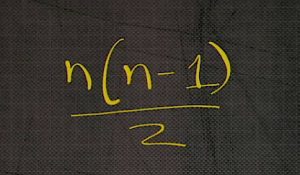 For this example, we have 5 nodes.

I didn’t have to count anything.

Those are various topology types that you need to be familiar with.

This content is from our CompTIA Network + Video Certification Training Course. Start training today! In this video, CompTIA Network + instructor Rick Trader demonstrates how to use cable testers in network environments. Let’s look at some tools that we can use to test our different cables in our environment. Cable Testers Properly Wired Connectivity … END_OF_DOCUMENT_TOKEN_TO_BE_REPLACED

Video transcription Steve Fullmer: In our Windows training courses, we often share information about the Windows 8.1 Mobility Center. Mobility Center was introduced for mobile and laptop devices in Windows 7. It’s present and somewhat enhanced in Windows 8. Since we don’t have mobile devices in our classrooms, I decided to take a little bit … END_OF_DOCUMENT_TOKEN_TO_BE_REPLACED