Classes are held in Phoenix, AZ and can be attended online from anywhere in the world with RemoteLive™.

One of the things that we might have to do in our corporate network is to take a class of IP addresses and then subnet that into what’s called a Classless IP Addressing Scheme.

If our corporation owns a Class B or Class C address we might not want to use private IP addressing to accomplish multiple network segments.

In this session, we are going to look at how to subnet a Class B address into multiple network segments using what’s called The Magic Box. You may or may not have heard of the Magic Box before. You may have learned subnetting in a Microsoft class or learned how to subnet in a Cisco class, CompTIA + or a Citrix class.

There’s many different ways of accomplishing the same task. One of the things I learned a long time ago from another instructor was a feature called the Magic Box. For me, it made sub‑netting very simple.

Let’s run through this real quick.

First of all, before you can subnet a network, you have to understand how the subnet mask works and is associated with our IP address. It’s going to do a feature referred to as ANDing. 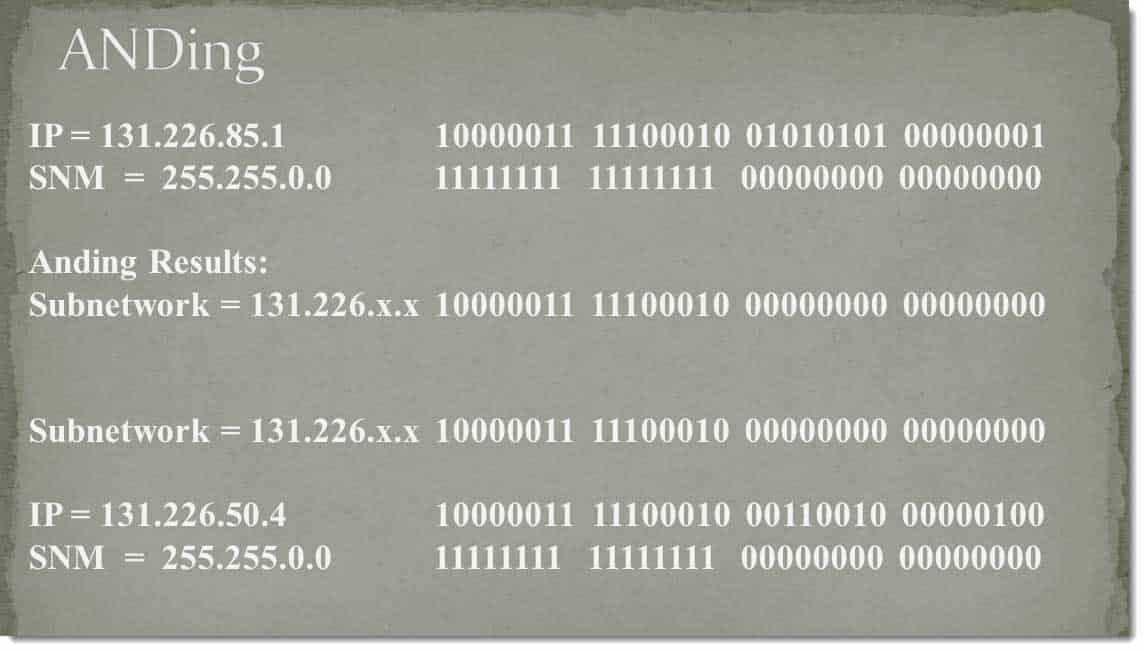 When we AND, we have one and one as our bits will also equal one out. If we have a zero in, it doesn’t matter whether it’s zero and zero, one and zero, or zero and one, if there’s a zero in on that bit, it’s always going to be a zero out. 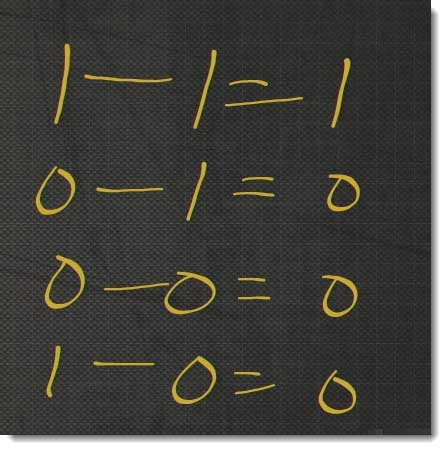 The reason why we get all zeros after that and we don’t even have to compute is, in our default subnet mask that’s all zeros.

I then compare these two values together.

In this case, the results are equal. My destination computer is in the same network segment that I’m in.

It doesn’t matter. My subnet mask is zero, it doesn’t change the result.

If I change a bit here,

When I compared the two together, we’re in two separate network segments. IP is, then, going to send this packet off to the router. That’s how ANDing works. Now, we’ve understood ANDing, lets real quick run through an actual subnet problem. 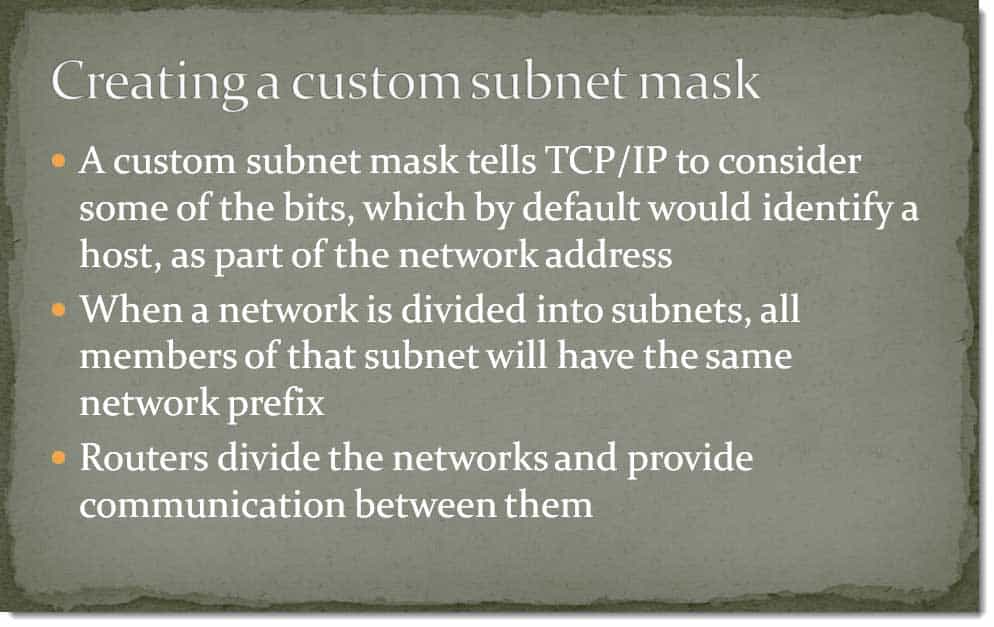 First of all, the process of subnetting is creating a custom subnet mask so that we can create multiple network segments. 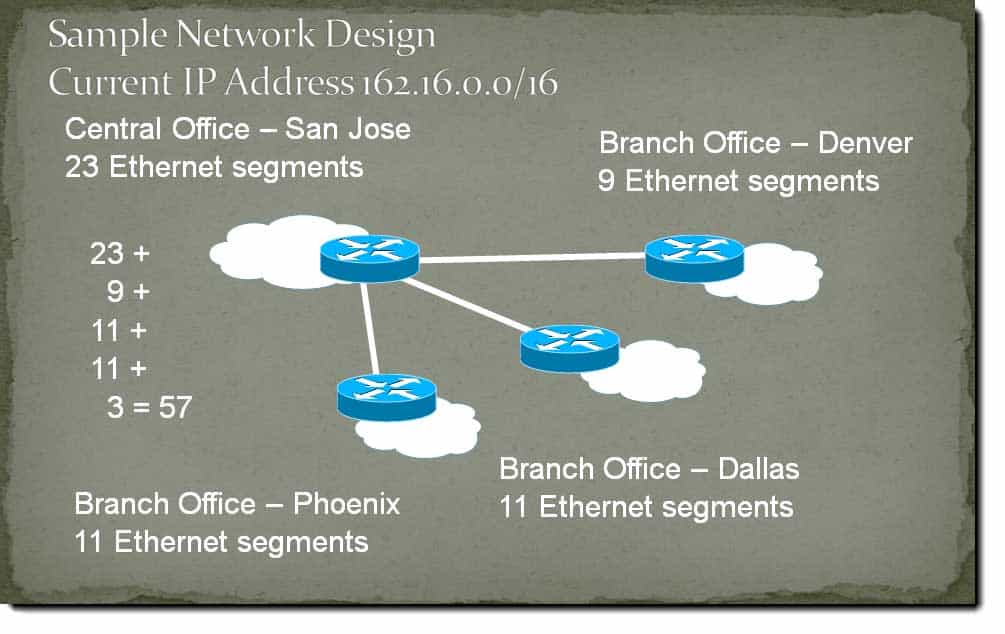 I want to cut up my corporate network. The boss has said, “We need the following network segments, we don’t want to use a private IP addressing skin, we want to use our public. We’ve purchased it therefore we want to use it.”

Management also says, “We want to be able to use these three network segments.

We’re going to divide as part our corporate IP addressing scheme and not being provided by our ISP.”

If I add those in, I end up with a total of 57 network segments.

That’s what corporate wants us to have. When all done, we need to have at least 57 network segments. 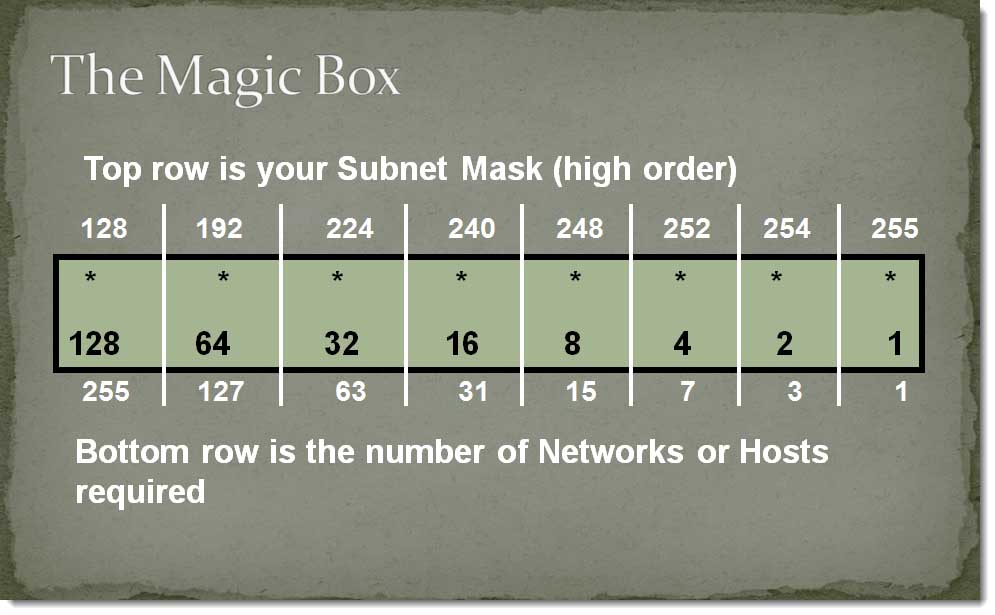 Let me make that a little bit simpler for you. If I go across the middle of the box. 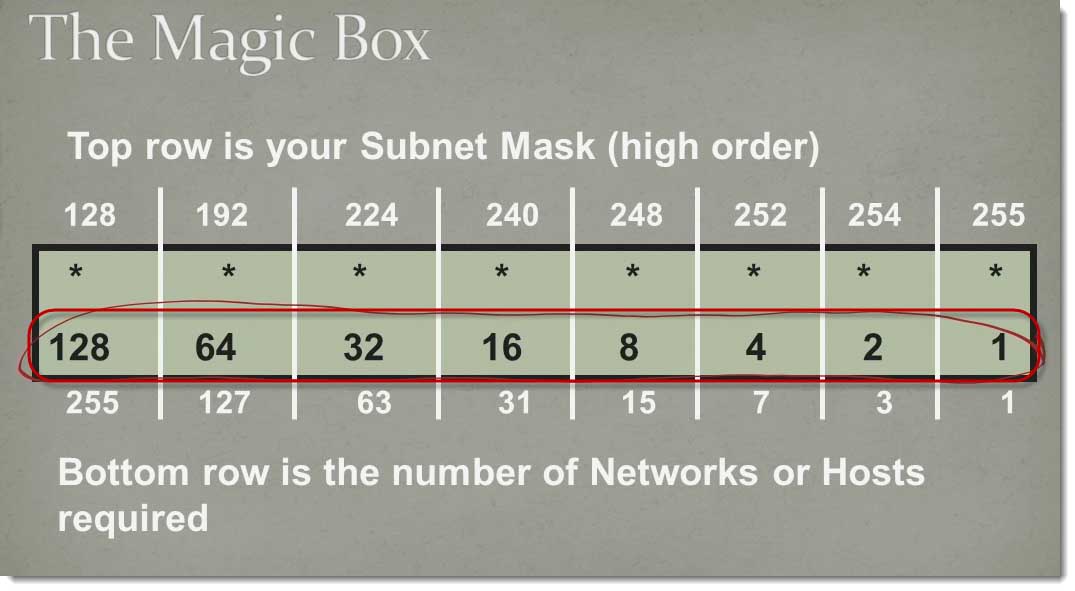 Going across the bottom. 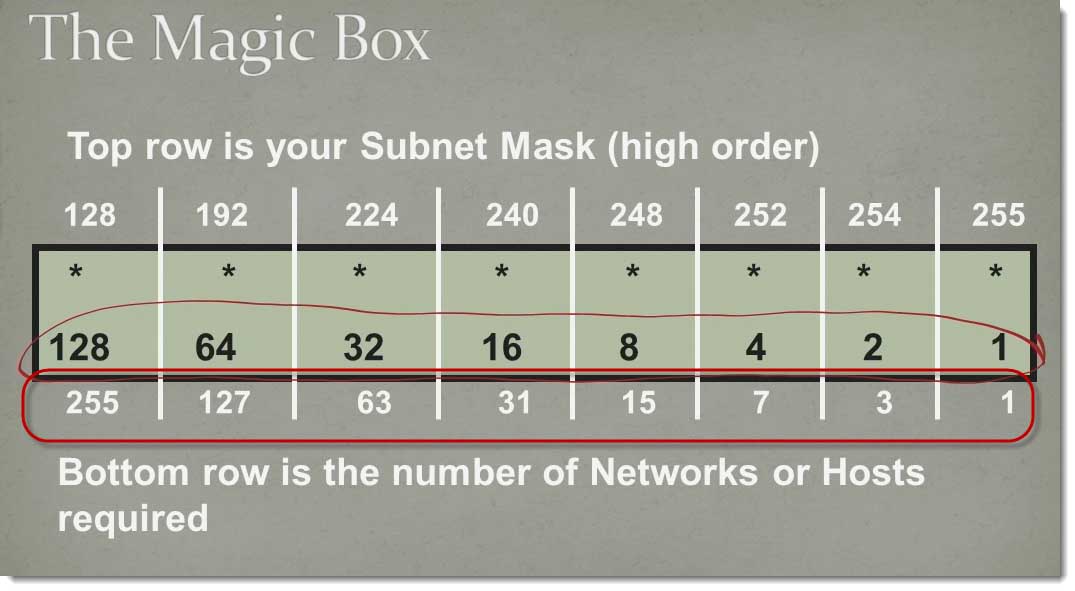 We can actually do this one of two ways. 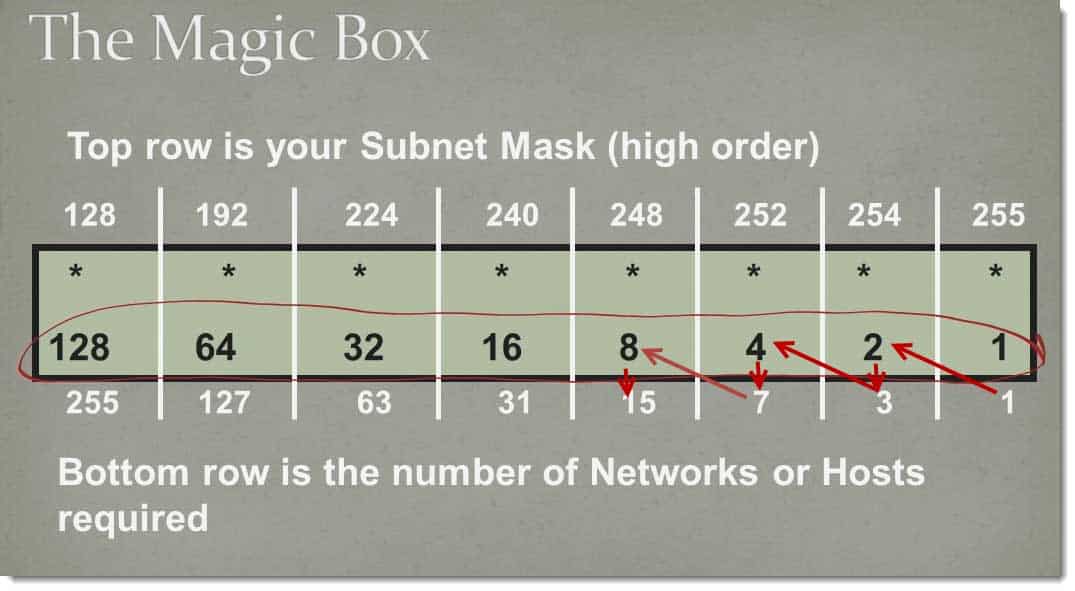 Going across the top is going to represent our new subnet mask, and if you remember how subnet mask work, it always starts with the higher order bits and it’s also going to be contiguous.

If I were to have a logic level-one in this first place holder and the rest were zeroes, that would be a subnet mask of 128.

The reason why I’m adding this is if you take a subnet mask as an example, let’s say we add a 3‑bit subnet mask.

Use whatever way’s the simplest for you for creating this. 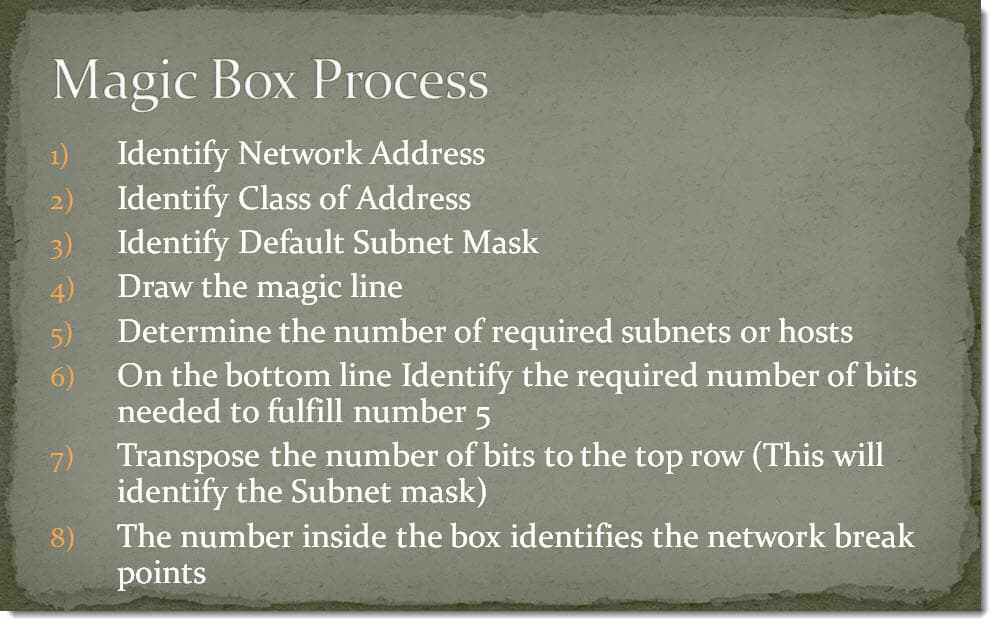 I will show you each of the eight steps. It’s an eight‑step process. We’ve got it written out here, but let’s go through the actual steps.

Step number three is to determine the default subnet mask and convert it to binary.

The fourth step is going to draw what’s referred to as the Magic Line.

If I take my subnet mask and I find a break point between the ones and the zeroes, in this case, the breakpoint is right there.

If I were supernetting, I would borrow bits from the actual subnet mask.

Supernetting is when I want to combine two network segments together to give me more hosts.

If I borrow to the right of the line, I’m subnetting.

In other words, I’m borrowing bits from the host to give myself more network segments.

In this case, we’re subnetting, we’re borrowing bits to the right.

Step number five is using from management the required or the desired number of network segments.

In this case, management decided we wanted to have at least 57 network segments.

Now, we go back to the Magic Box and we go to the bottom of the scale. 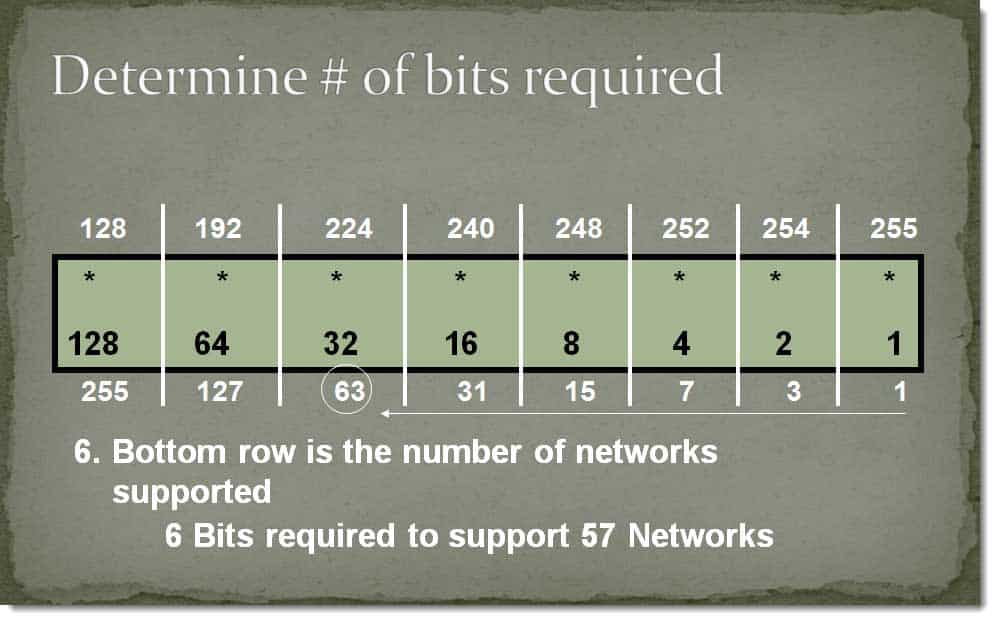 63 is either equal to or greater than that required number’s network segments.

We require six bits in our subnet mass in order to have at least 57 network segments, at least 6 bits.

Step number seven, we’re going to transpose those bits to the top. Again, because of the rules of subnetting, our subnet mass will always be higher in the order of bits contiguous from the left, we transpose that to the top, our 6 bits. 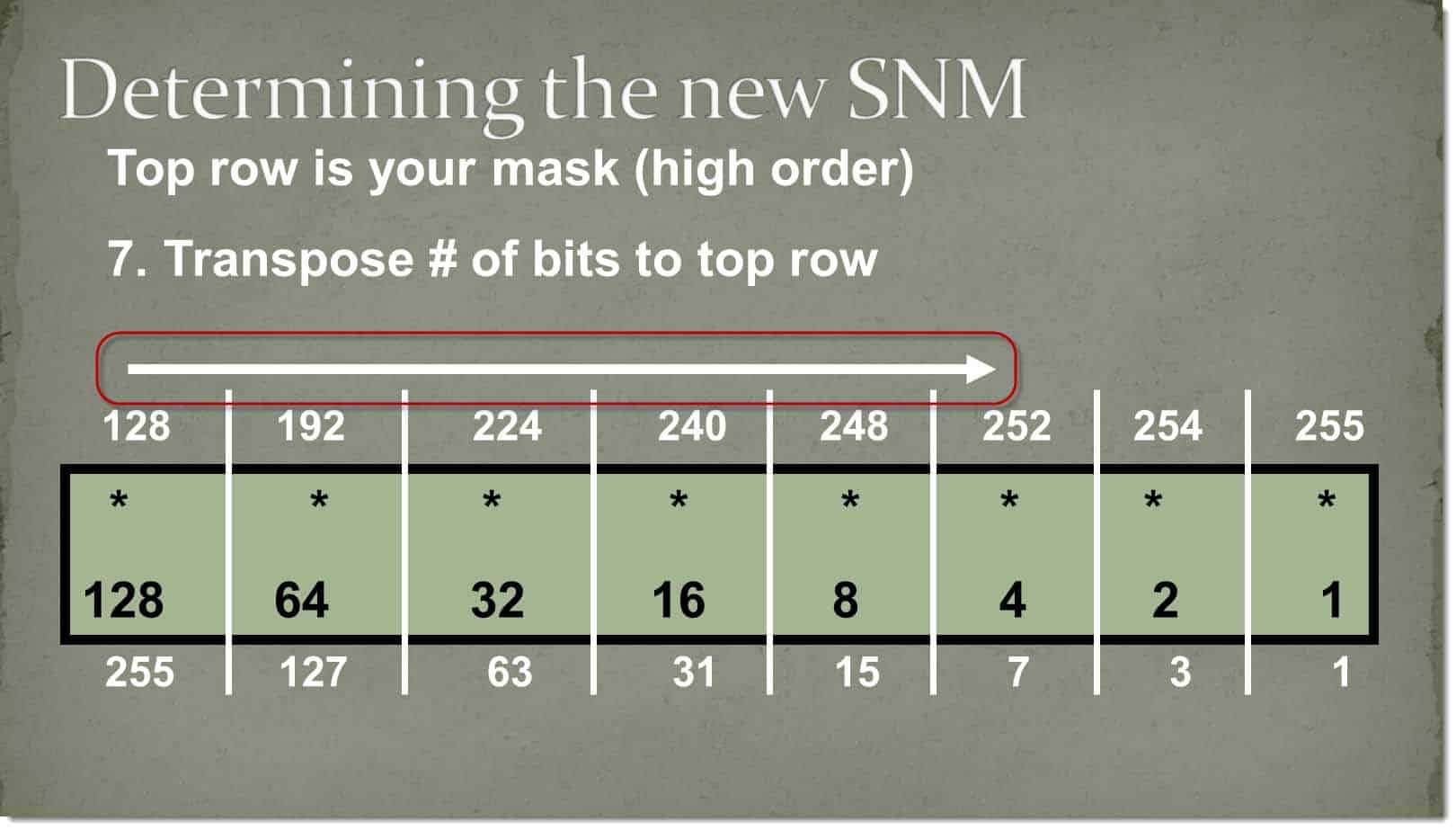 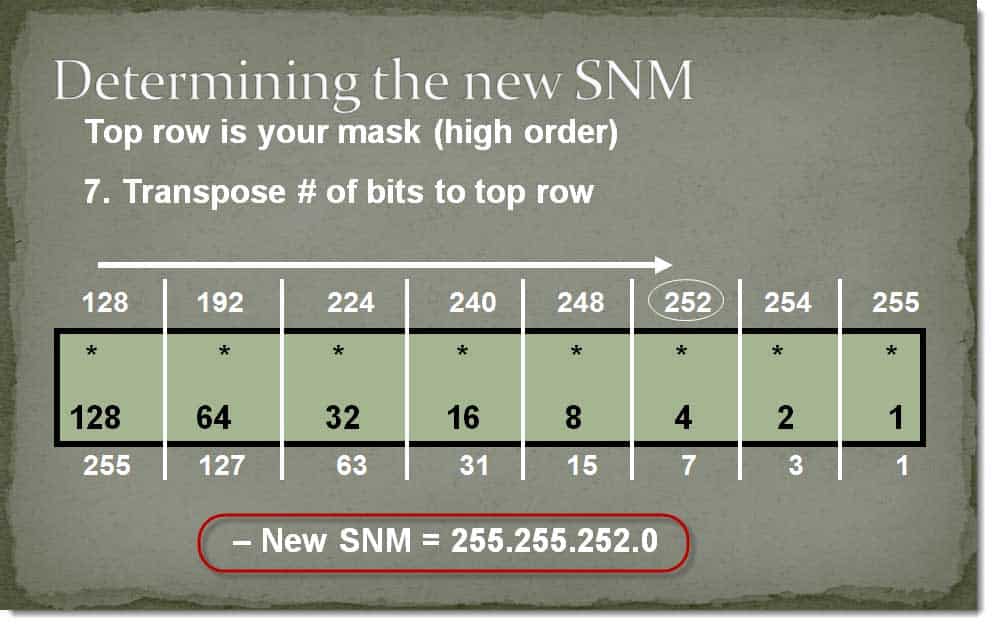 How does all this come into play? I know this might be hard to read, but I wanted to count up binarily from zero to 16 to show you how the subnet mass works. 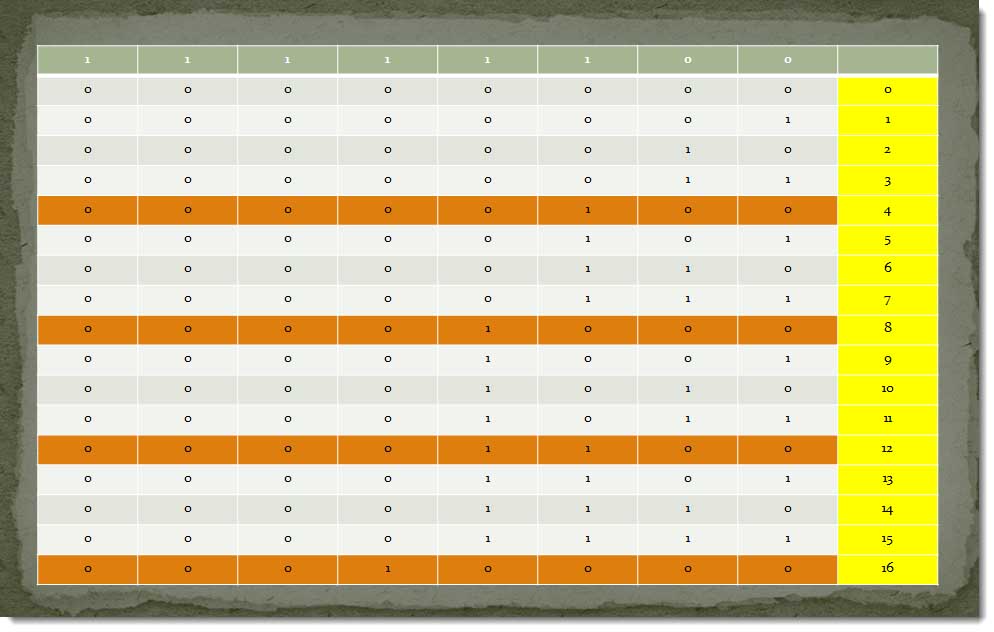 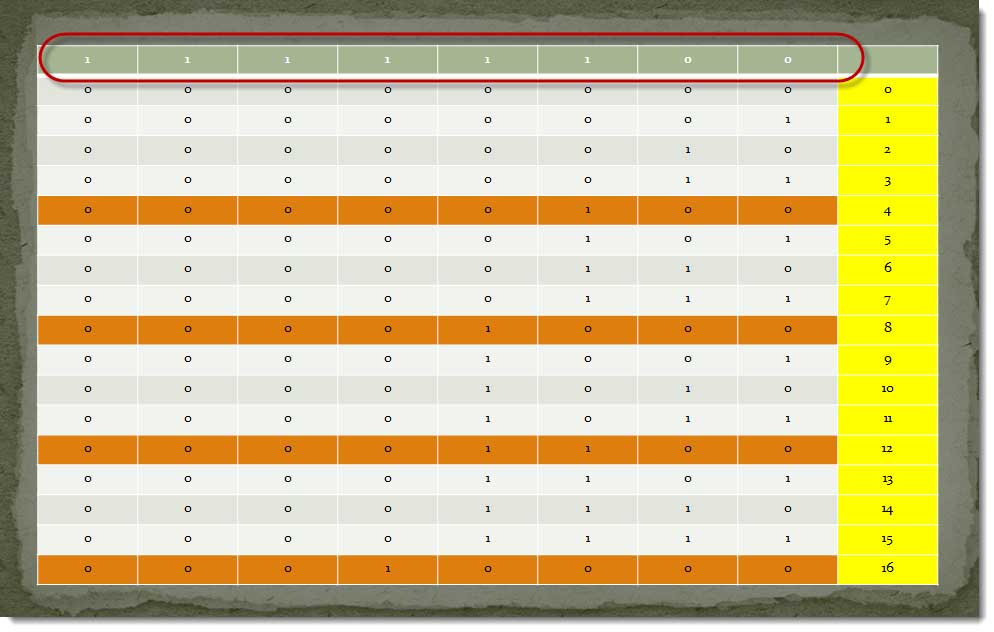 Right here is where that magic line would be. 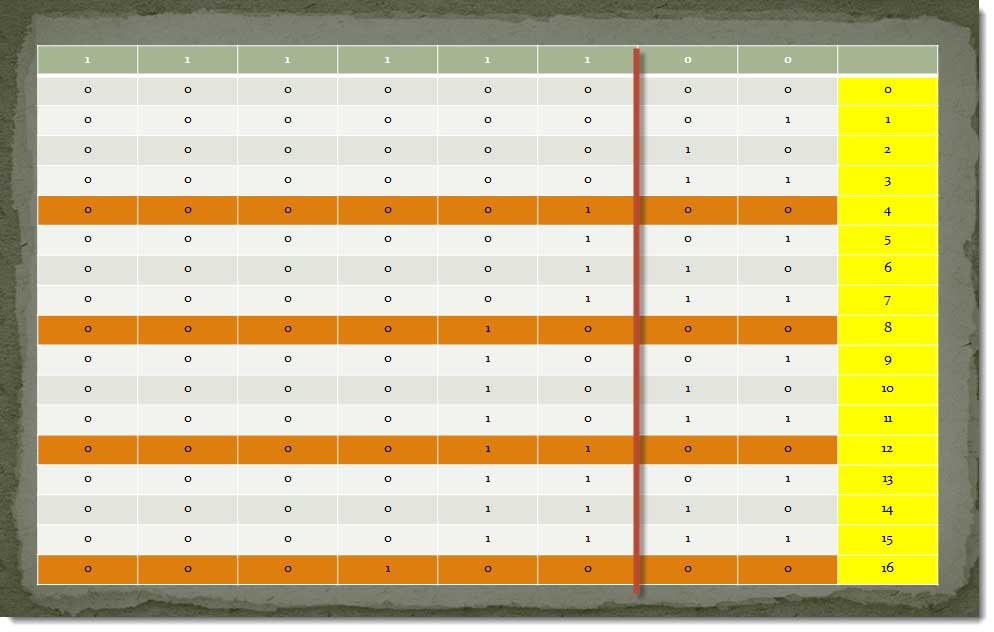 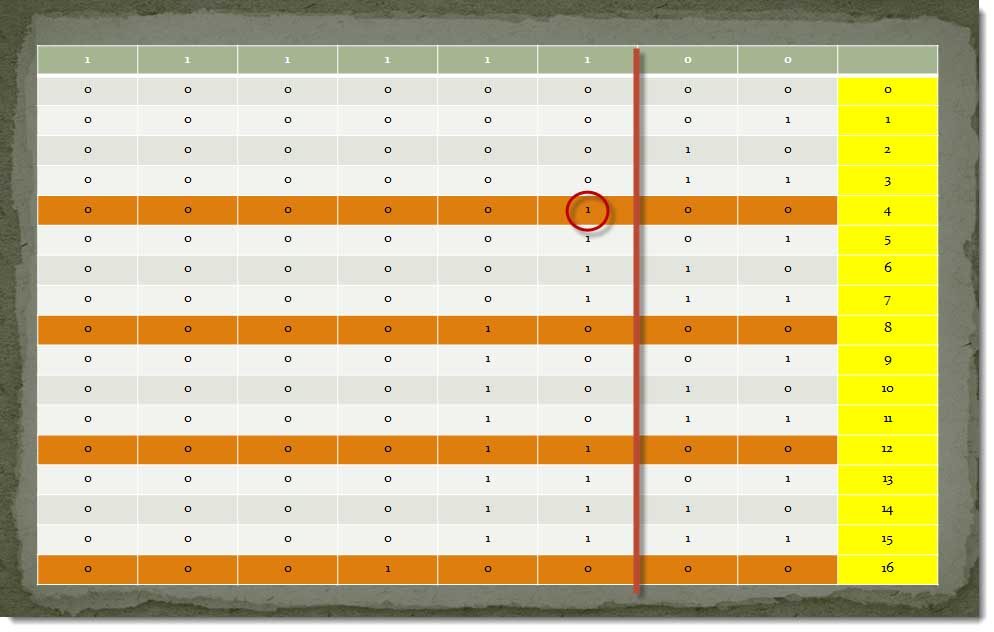 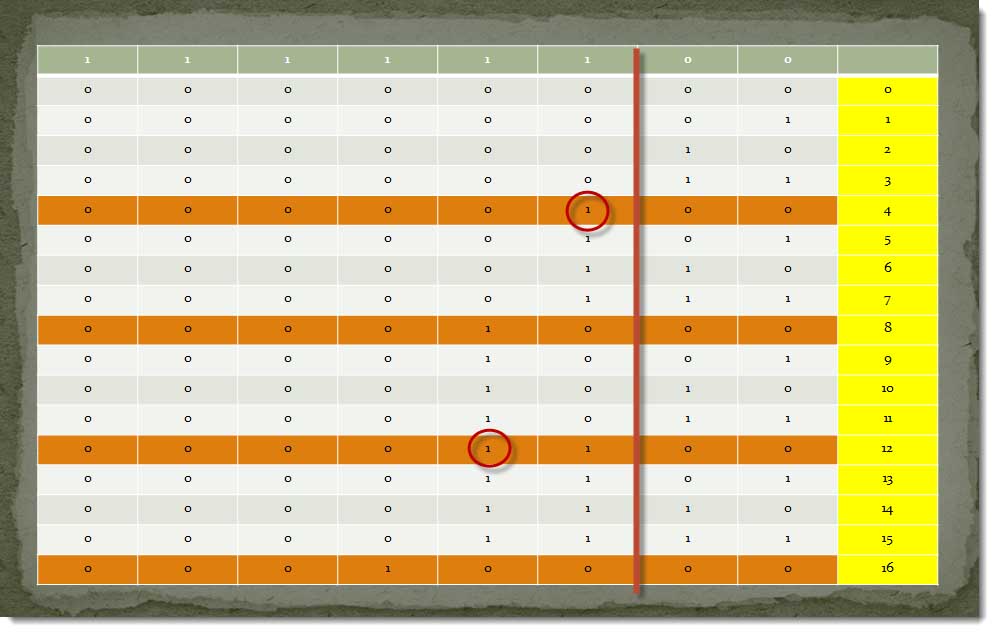 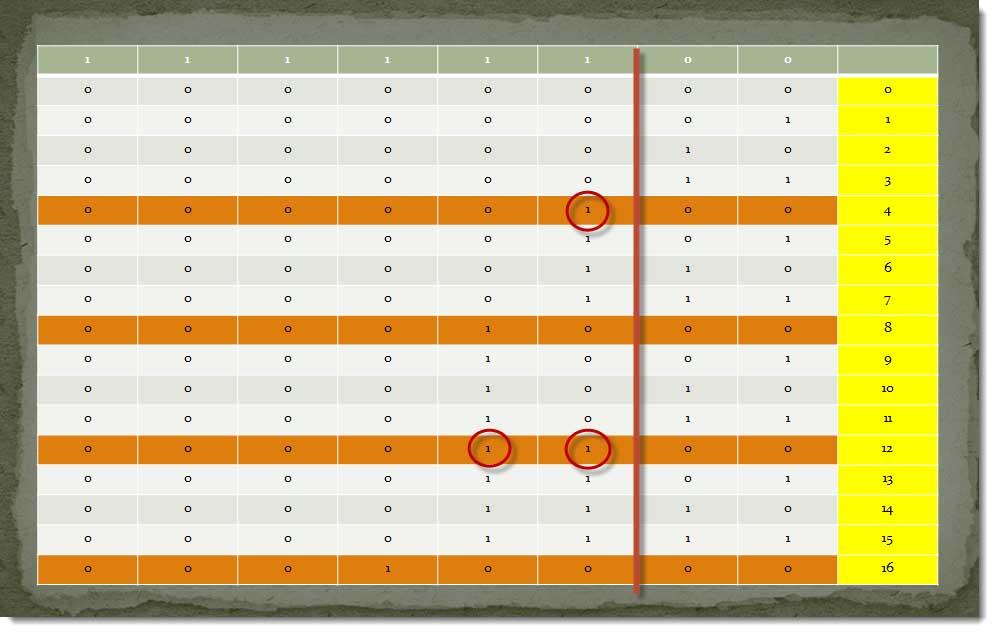 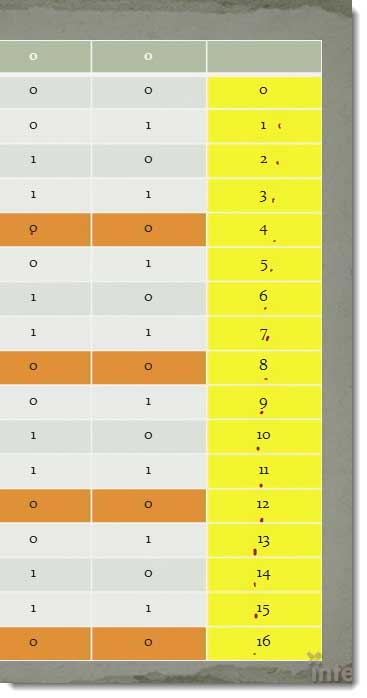 Every fourth increment, I’m actually going up to a new network segment. Hence, the 4.

If, by chance, I was using a 248 subnet mass, I’m going to be counting up in vise of eight.

To show you that again, if I come over here that means that my magic line would be now be here. 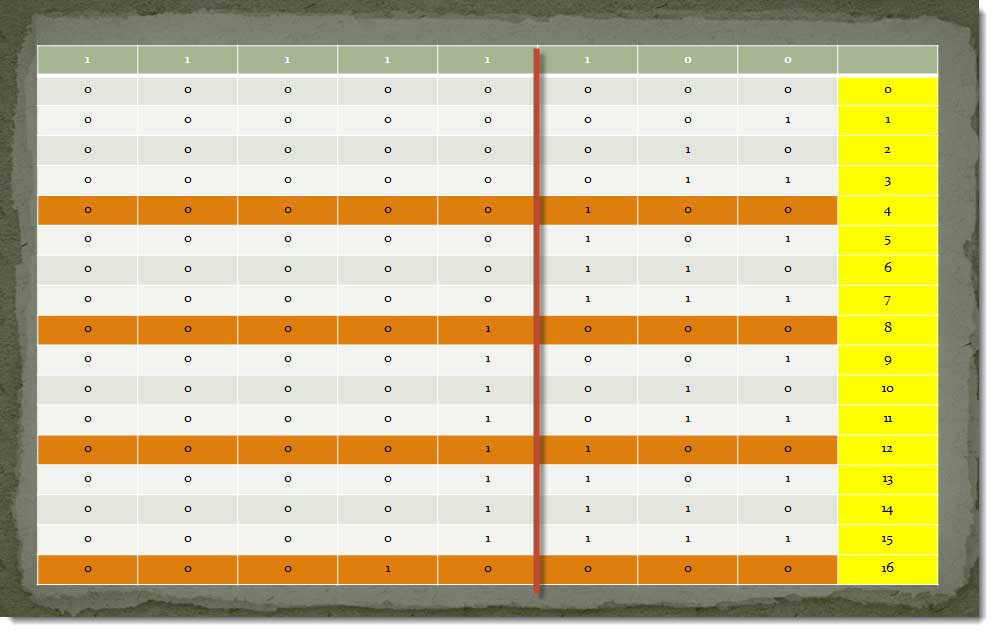 Which means, all these numbers I don’t change until I get to here. All of a sudden, I change the bit, a new network segment. 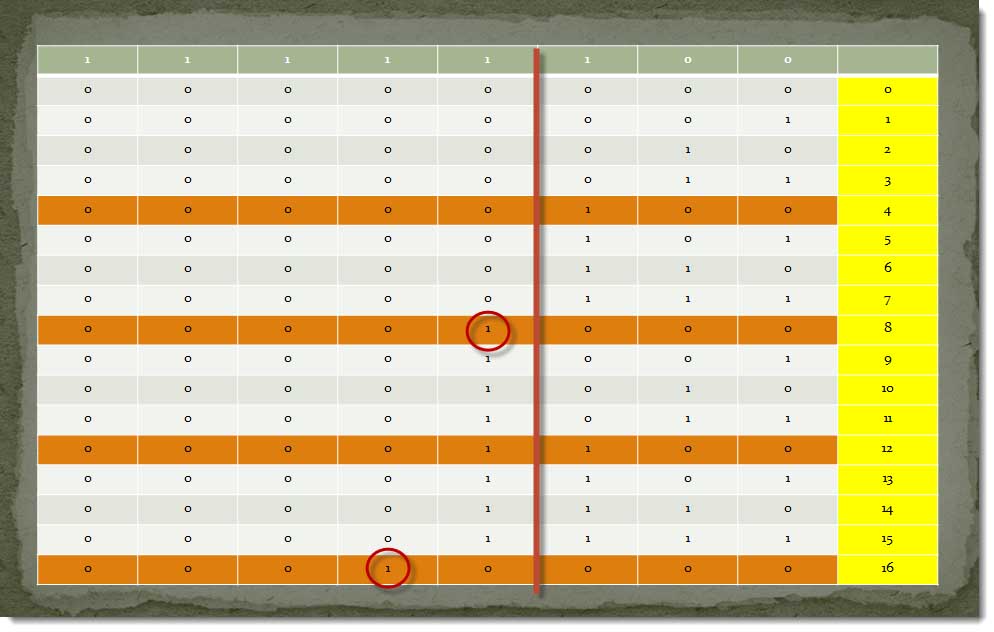 Every eighth one changes. That’s where that magic number comes into play. That is so cool for counting up your segments.

Between those two addresses become legal addresses for this network segment, 0.1 to 3.254.

I continue to count up that way in increments of four until I get to 162.16.248 because my next IP address would be my subnet mass for a total of 63 network segments. 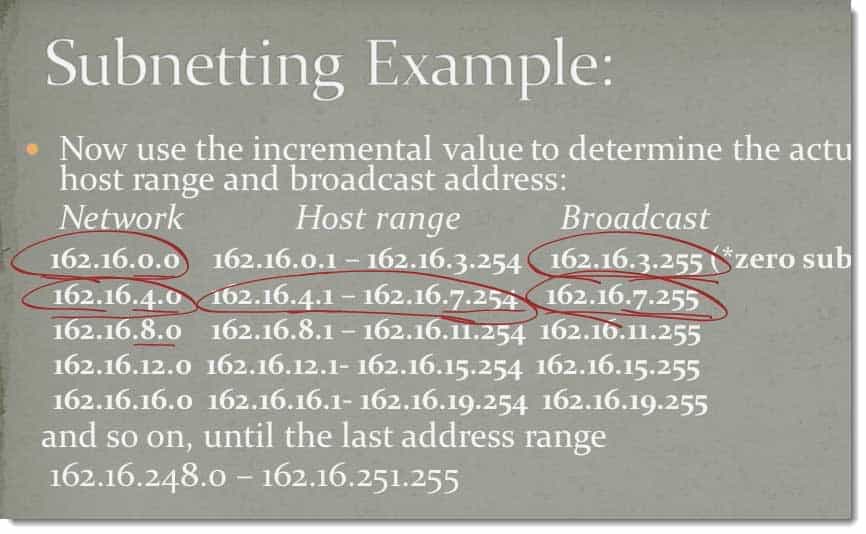 Now, the corporation can expand an additional seven segments if needed over the 57.

What else can we calculate from this?

If I have those six bits for my subnet mass that means I have eight bits in the last octet, and I have two bits in the third octet for actual host IDs.

I can calculate the number of hosts. 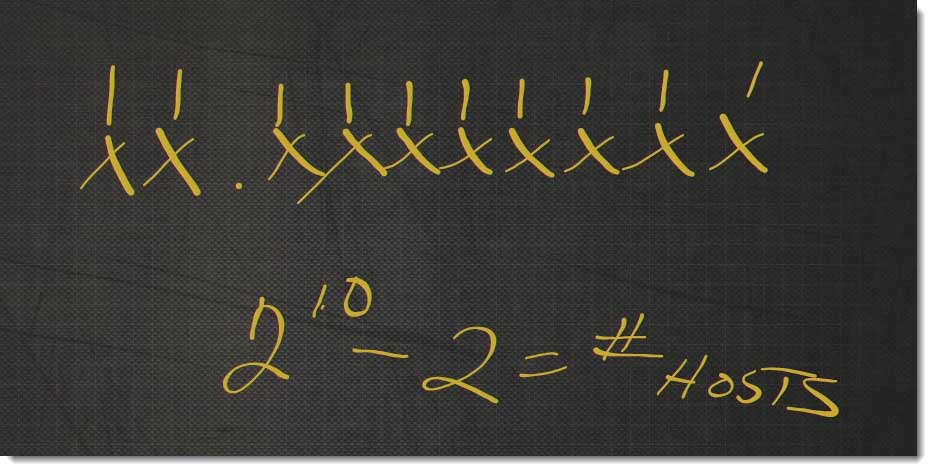 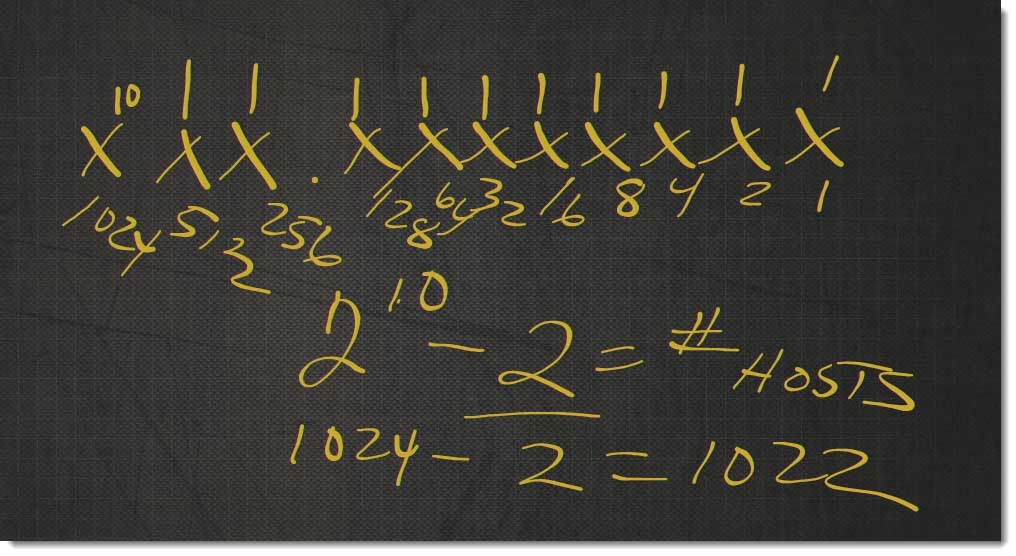 In this video, you will gain an understanding of Agile and Scrum Master Certification terminologies and concepts to help you make better decisions in your Project Management capabilities. Whether you’re a developer looking to obtain an Agile or Scrum Master Certification, or you’re a Project Manager/Product Owner who is attempting to get your product or … END_OF_DOCUMENT_TOKEN_TO_BE_REPLACED