How to Run the Exchange Management Shell EMS in PowerShell

How to Run the Exchange Management Shell EMS in PowerShell

How to Run the Exchange Management Shell EMS in PowerShell
Instructor: Mike Pfeiffer

Let’s take a look at a couple of ways that you can use the Exchange Management Shell in a scripting environment. We’ll go beyond just working interactively in the Shell and actually composing real world robust scripts.

We’ll use a scripting editor and make sure that we can get the Exchange environment loaded as well. Then we’ll also look at some common scenarios like some basic report generation and scheduling some scripts so they’ll run automatically for you in the background. 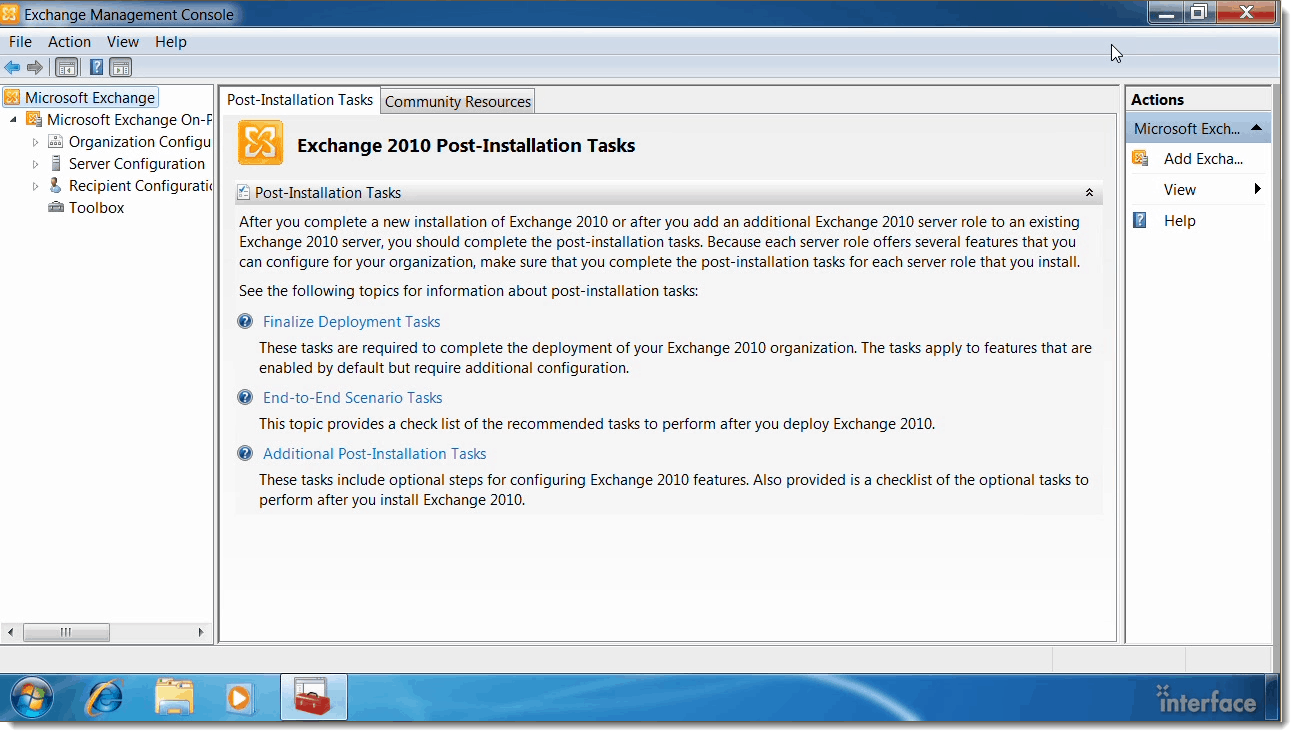 Hopefully, this is familiar to you. But I can also go into All Programs under Exchange 2010. You can see that I have the Exchange Management Shell shortcut. 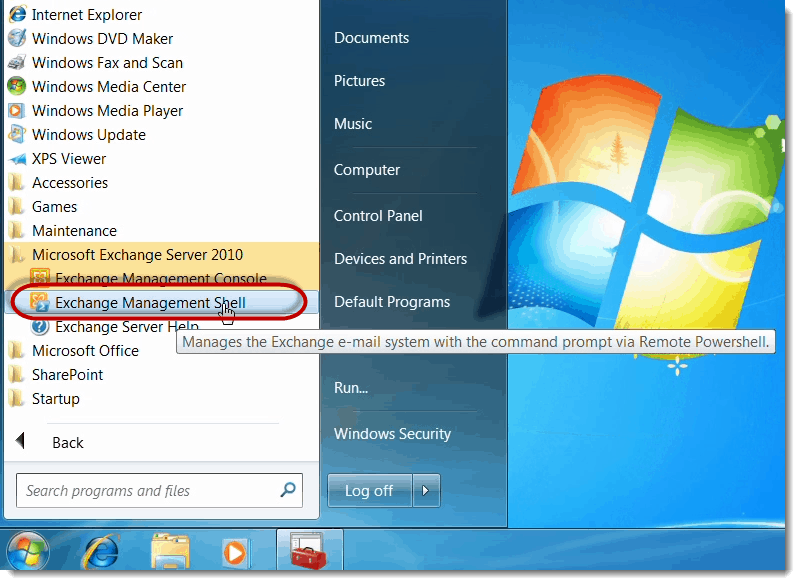 So this is basically just a customized version of your typical powershell.exe.

What will happen here is in my environment when I fire up this instance of Exchange Management Shell, we’re actually going to go out in an Active Directory and trying to locate an Exchange Server in the current Active Directory site that I’m sitting in. Sometimes, this first run will take a little bit of time.

You can see that it hung there, but what it’s doing right now is it’s connecting to exchange.uss.local, so that’s a server that’s remote to where I’m sitting.

Once that comes up, I can do things like run “get mailbox,” that will show me all the mailboxes that are out there. What’s happening is that command is really executing on the Exchange Server, on exchange.uss.local. 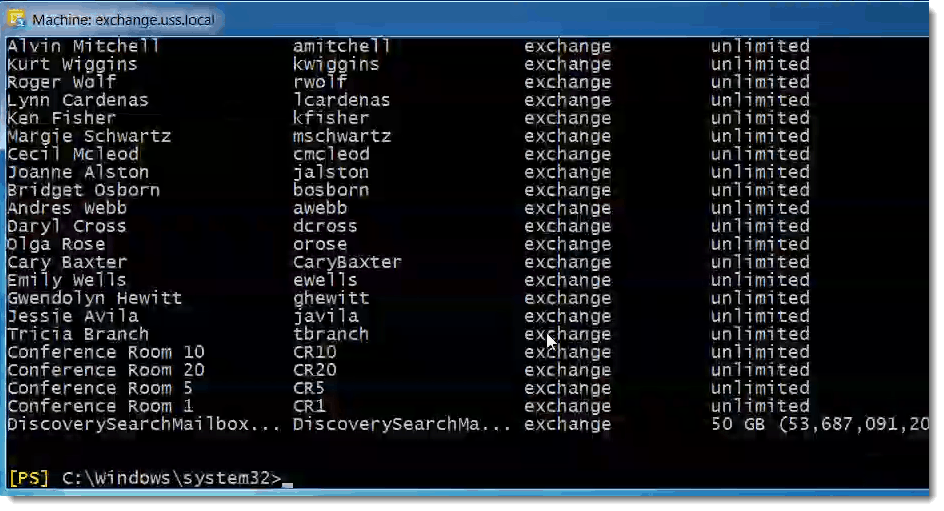 Now if we look at the typical PowerShell, blue PowerShell console, that you’re probably used to that’s located under Accessories > Windows PowerShell.

This is just powershell.exe, and when you run this you don’t actually get the Exchange tools even though you might have them installed locally. So here, if I try to run get mailbox, I’m going to get an error there because we haven’t really told this instance of PowerShell that we want the Exchange tools loaded.

When you run this shortcut, let’s take a look at that, we’ll go into Programs and go into the Properties of the Exchange Management Shell. 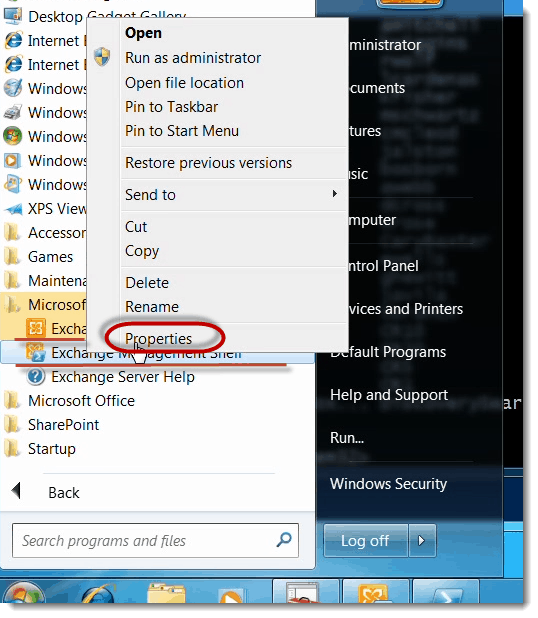 You can see that we’re really calling as the target for this shortcut, we’re calling PowerShell.exe. 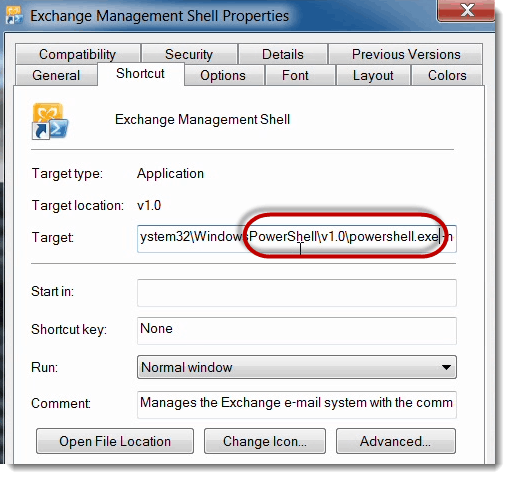 If you look further down the Target, we’re actually importing this PS1 script that gets installed with the tools. 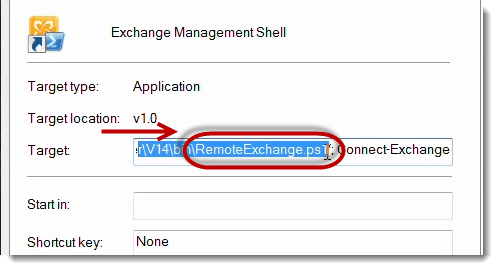 So this script has bunch of variables and shell specific functions and things like that one of those being “connect Exchange Server.”

So we’re basically firing up the powershell.exe and then running some additional commands to kind of customize this view. Change the icon. Make the background black instead of blue.

And it actually gets the Exchange Commands loaded and connected to a server automatically in your environment. Now, one of the nice things about Exchange is that we have the ability to do remote connections.

So if you wanted to manually set this up, maybe you have an XP machine that’s 32‑bit, the Exchange Tools are 64‑bit, so you can’t install those there. You can still use PowerShell v2 to connect. Let me show you how you do that.

First of all, you want to create a session variable. You use the new PSSession cmdlet to do that.

In this case, you need to manually specify the server you want to connect to. In my environment, that’s http://exchange.uss.local/powershell

I’m actually already logged into Windows with a user that has permissions to run the Exchange Commands.

So you can see there that I’ve created that variable and didn’t get any errors back.

So now I should be able to import that variable. Import-PSSession $s

That will go out and pull those commands from the Exchange Server.

Now that that’s loaded, I can go ahead and run get mailbox, and this time that should run without any errors. 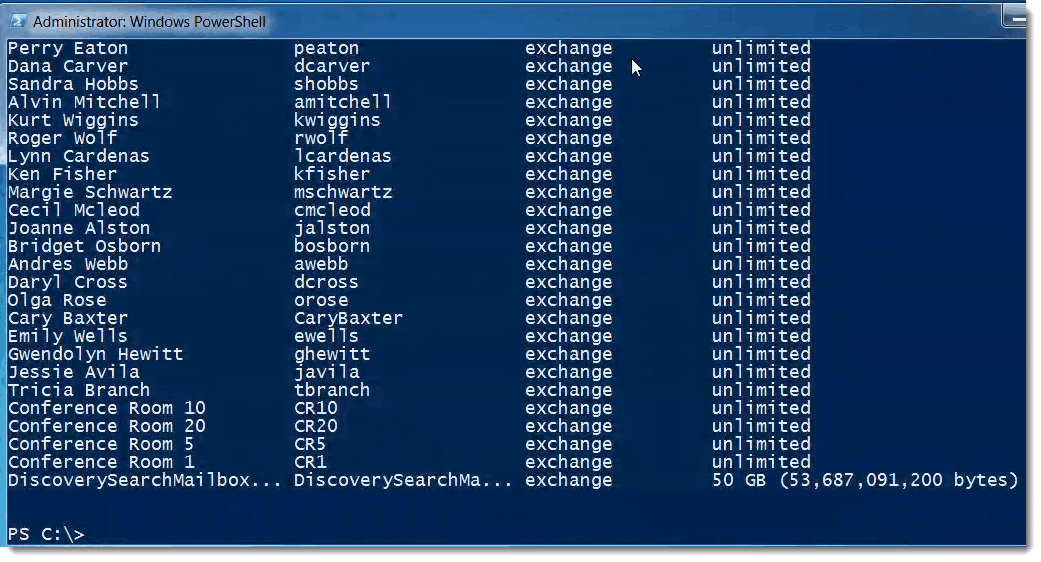 For Instructor-Led live classes, see our complete Course Schedule. Many courses are available online with RemoteLive™.

This content is from our CompTIA Network + Video Certification Training Course. Start training today! In this video, CompTIA Network + instructor Rick Trader demonstrates how to use cable testers in network environments. Let’s look at some tools that we can use to test our different cables in our environment. Cable Testers Properly Wired Connectivity … END_OF_DOCUMENT_TOKEN_TO_BE_REPLACED