In this post, CompTIA Network + instructor Rick Trader covers fiber optic cables and their specific use in network environments.

A common type of cable you’re going to come across inside your corporate network is going to be fiber optics. Fiber is our most common cable if we want to have high speed data (Up to four gigabytes per second).

Depending on whether you are multi‑mode or single‑mode cable will control your distance of every cable. We’ll discuss single‑mode and multi‑mode latter.

What actually carriers our signal is in the center of our cable, referred to as a ferrule. 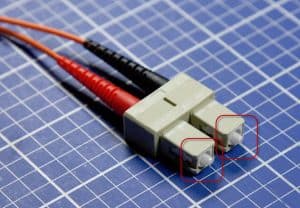 This center conductor is either going to be made of high‑quality plastic, or ceramic to carry our light signal through it.

Depending on the type of cable, (single‑core or multi‑core) it will control the thickness of the actual ferrule itself. Later we will discuss shining and polishing the ferrule.

The difference between single‑mode and multi‑mode.

Multi‑Mode Fiber (MMF) is only going to be run in short distances. Normally, inside your organization running from something such as a patch panel to another room inside your facility. It might be running with inside the patch panel. It might be coming from your demarcation point which is the spot that comes inside your corporate environment where your ISP is coming in.

The size of a Multi-Mode (MMF) ferrule is 62.5 microns, whereas on Single-Mode (SMF) is 9 microns. It’s much difference in size.

Multi‑Mode allows us to carry multiple signals at the same time. Multiple different data paths. They’re going to do it by using different wavelengths of the light

It has a 9‑micron ferrule. Only one piece of data can travel on the cable at a time.

When we’re looking at our cables, our cables will always have a transmit and receive ferrule on the end . 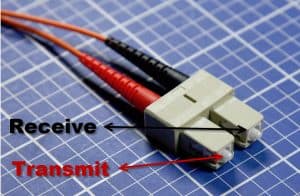 Later, we’ll see which end is a transmit and a receive when we plug the cable into a Cubic. 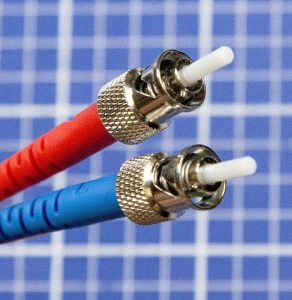 You’ll see, we have our ferrule. The fiber is so small we can’t see it. The white is a protective sheeting. Inside of the white is the ferrule itself.

This is a ST connector, or sometimes we refer to it as a Bayonet connector. If you remember the BNC connector, it looks a lot like a BNC connector. It snaps on, and it twists a quarter of a turn. This is typically going to be multi‑mode, which means it’s going to be inside of our organization. Commonly can be on our patch panels in our environment.

These are two different connectors. One, is a compound connector that’s all in one piece while the other is the same SC connector but it is separated. 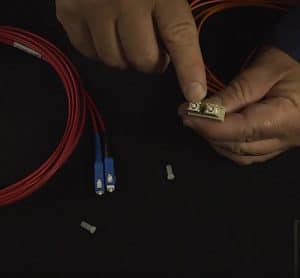 These are going to plug in to what’s referred to as a cubic, or a transceiver. 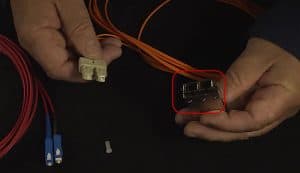 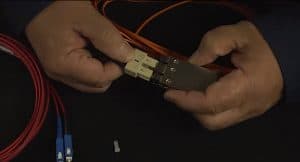 If we turn the transceiver over, notice there are directional arrows. 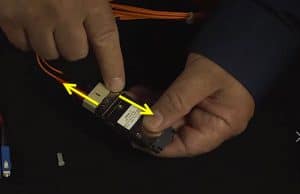 If you are going from a device, from one computer to another computer, make sure that you swap my connectors so that the transmit is connected to your receive input on one side. Then, your transmit from computer A is connected to the receive on the computer B.

Again, you just pull on it and it pulls out. You want to make sure that you put your dust connectors back on if you’re not using them.

This one does the same thing. 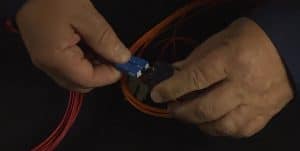 It’s also got guides on the back. They slide in just like any other one would. This one is a little bit easier to use. 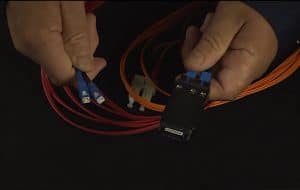 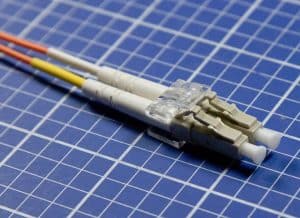 The next type of connector you might see is called a Lucid Connector, or a Local Connector. Lucid is a manufacturer and they’re the ones that first released the connectors. The LC connector, they refer to it as a small form connector. If you going to be doing gigabit or 10‑gigabit Ethernet, you will need to use an LC connector.

The difference between the LC and the SC is my LC is going to be tabbed. Notice, it’s got little tabs right here that’s going to lock it in to place. Again, it includes dust covers. 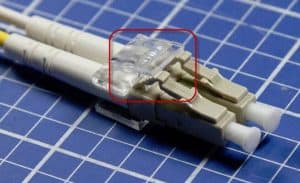 We also have a connector called the APC, or the Angled Physical Connector. What this one is going to do is, the ferrule itself, or the tip of the connector, is going to be angled just a little bit. Then, when you plug it in to a device, it’s a better connection. It creates less signal attenuation or signal loss between the two devices.

Let’s take a look at what a Lucid connector looks like with its transceiver. 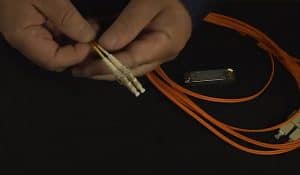 This is a Lucid connector.

They’re going to plug in to a mini cubic. 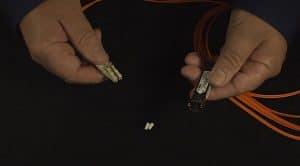 It also has the receive and transmit directional arrows on the back.

If you need to unplug it, you can just simply pull and unplug.

One thing to keep in mind with your cabling is you might have different connector on both ends. 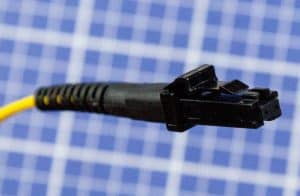 The last connector that you might see in fiber is called a Mechanical Transfer Registered Jack (MTRJ). It’s going to be a multi‑mode connector, which means it’s going to be for internal. It’s going to be, be able to duplex, meaning, it can send multiple signals down the cable at the same time.

This cable. Notice it plugs in, it looks like an RJ45 connector. It’s bigger than an RJ11, but smaller than an RJ45. 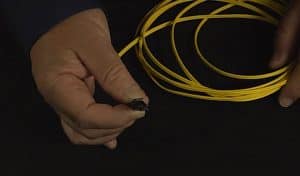 Notice it looks a lot like a RJ45 connector. It is a little smaller than RJ45, but larger than an RJ11, which is your phone.

It is keyed just like other connectors so that it only goes in one way and it locks in to place, it’s got a little snap so that when it is plugged in, it makes a secure connection to your computer.

When identifying patch panels and fiber, they will be color coded by the manufacturing industry.

We have what’s called Optical Multi‑Mode, or OM. There are four different versions all based on  speed, and all based off of how the ferrule has been polished.

Single‑mode fiber will be blue.

If I have an APC connector, (the one with the angled ferrule) will be green. 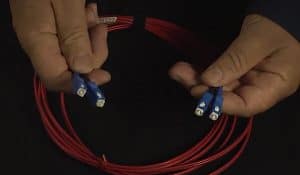 This blue connector informs us that this is going to be a single‑mode fiber. It’s not a multi‑mode.

If we look at another fiber cable, notice the connectors are beige.

These are going to be OM1 connectors.

Those are just standards if you’re doing multi‑mode versus single‑mode.

Also, your ST connectors will always be single‑mode. You don’t have to worry about color‑coding them.

For CompTIA Network + certification, you will need to be able to identify the different types of connectors, whether or not they’re multi‑mode or single‑mode, and then the most common patch panel colors for our cables.

This content is from our CompTIA Network + Video Certification Training Course. Start training today! In this video, CompTIA Network + instructor Rick Trader demonstrates how to use cable testers in network environments. Let’s look at some tools that we can use to test our different cables in our environment. Cable Testers Properly Wired Connectivity … END_OF_DOCUMENT_TOKEN_TO_BE_REPLACED

Video transcription Steve Fullmer: In our Windows training courses, we often share information about the Windows 8.1 Mobility Center. Mobility Center was introduced for mobile and laptop devices in Windows 7. It’s present and somewhat enhanced in Windows 8. Since we don’t have mobile devices in our classrooms, I decided to take a little bit … END_OF_DOCUMENT_TOKEN_TO_BE_REPLACED