In this post, CompTIA Network + instructor Rick Trader demonstrates common cable tester and how to use them in network configurations.

We have previously covers cables and connectors so now let’s look at some tools that we can use to test our different cables in our environment.

The first is a simple cable tester. Since you may find yourself creating your own cables such as installing our own RJ45 or BNCs ends, we want to make sure those cables have been correctly wired.

One of the things we can look at is are we properly wired using this cable tester. It also allows us to check connectivity from one end to the other end.

Let’s take a look at a simple cable tester. 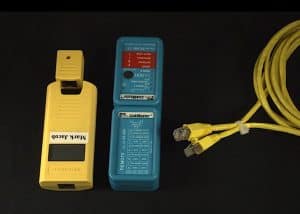 These simple cable testers are inexpensive. You can pick these up at most of your computer shops anywhere you go.

The first one we are going to look at is this blue LinkMaster. 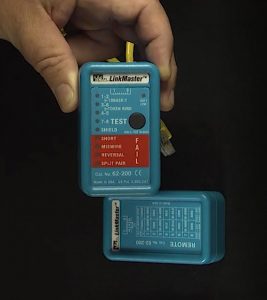 You’ll notice on the blue one, we’ve got a series of cables here and it’s got lights. It’s going to show us whether or not we’re wired correctly. It also shows us the actual T568‑A and the 568‑B, the actual way the cable should be wired. 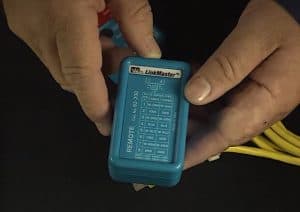 We will plug the ends into the tester (we already know this is a good cable) but we always want to make sure we test our cable tester with a known good to make sure that we are using good cables. 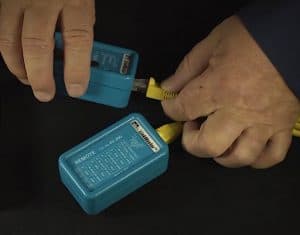 Next we’ll push the button and it goes out and it tests the cable. 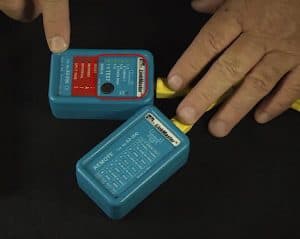 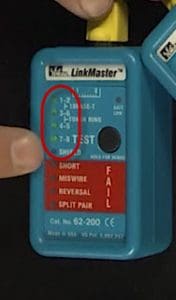 This is a good test. All it’s doing is testing the cable.

This other cable tester does the exact same thing but it just gives a little bit different of a display. 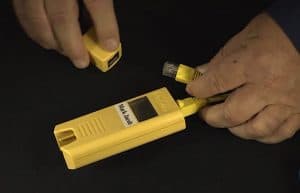 Again we’ll attach the cable on one one cable tester and notice it comes out and it shows me that pin 1 and 2, 3,4, 5, etc… all the way through to ensure they’re all wired correctly. 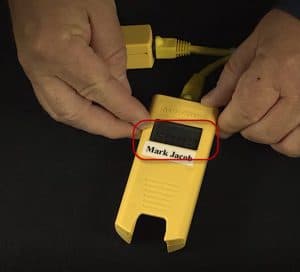 This is a known good cable.

Now let’s look at another good cable but now it’s actually a crossover cable. I know that by looking at the wiring cables. 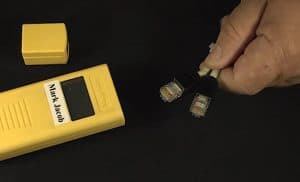 We will plug this into the cable tester and turn it on. 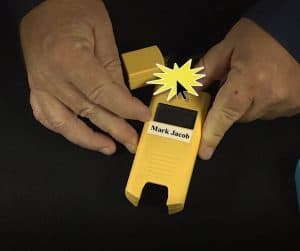 When plugged in, it starts flashing. It says, “Hey, I’ve got an open.”

If I use the original simple tester, notice it it informing us that we have a bad cable. 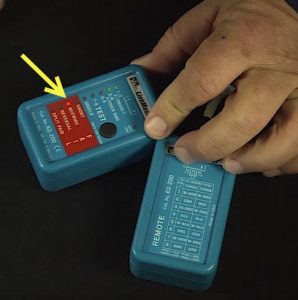 In this particular one, the cables four and five weren’t even wired. It’s showing me that I have a miswired cable. This allows me to go again. It allows me to go in and test my cables and be out to look at things correctly.

A wire mapper is sometimes referred to as a certifier. What a wire mapper can do is the same thing a cable tester can do. It can test my connectivity.

For example, we can put a loopback on one end and connect the wire mapper on the other end. It will test connectivity. It’s going to test to make sure I’m wired correctly.

The other things it can do is test the wire for attenuation. That ensures that I don’t have too much signal drop from the time from one end to the other end. A lot of times if the wire goes out of specifications, by running cables longer than we are allowed to, you’ll see that attenuation drops. As a result, we’ll get inconsistent data transfer.

It also is going to check for crosstalk. Crosstalk for example can be caused by untwisted wires when the patch panel was built or bad connectors can cause crosstalk.

We can also be getting crosstalk because of the way the cable in the cable feed. So the wire mapper, is more expensive the simple testers but it also provides more testing options.

Further, it will take pin 2 and 6 and ties them together.

Finally is will take pin 4 and 5 together then 7 and 8 together.

What this is actually going to do is it’s going to establish a loopback. This is what you’ll commonly see at a store. It’s just a simple one. 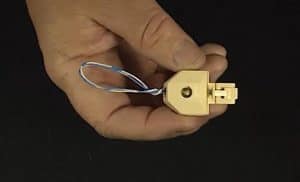 If we were to unbolt this, you’d see that pin one and three are connected to each other. What we can do is plug this in and actually verify that we get a link light. It will show that our network adapter card is being useful.

Here’s one that we made. 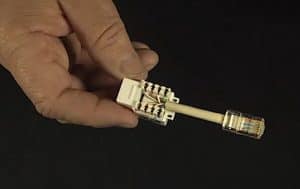 Finally, some of the little more expensive ones. If you look on here, it tells you actually how it’s looped back on the sides. 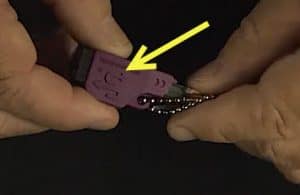 These are just different vendors, different ways they make the loopback adapters.

The next device that we might use in our environment is called a multimeter. Traditionally, most people are going to be using multimeters to check for voltage whether it be AC voltage or DC voltage. They might be checking AC voltage and making sure that the outlet is wired correctly, or making sure that an extension cord is working correctly or a power panel is working correctly.

DC can be used to check the voltage of possibly your CMOS battery or a battery that you might have in your environment or even the battery from your laptop.

We can also use a multimeter to check connectivity. Commonly a multimeter is used to check if a cable is shorted. Such as when the center conductor is making connectivity with or touching my ground. We also can be checking it to make sure the wire hasn’t been cut or there’s an opening in it.

Let’s look at how this is actually used.

Here is a standard multimeter. 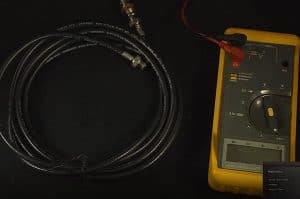 We use this with a coaxial cable because it’s a lot easier to test it with. Traditionally we are going to use the diode mode. (If you got a good Fluke meter or a good multimeter, they will have a diode mode.) 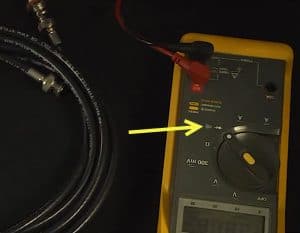 We can take the conductor and go to ground on the outside. Then we attach it to the center conductor in the middle. 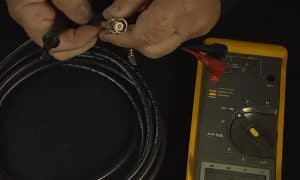 We should not hear tone. If there is a tone it means we have a short in the cable.

This means that somewhere along the run this cable is either been crimped (for example, someone may have closed it in a door or it may be up in the ceiling and been crimped up there) but somehow, the center conductor is probably touching the outer conductor. 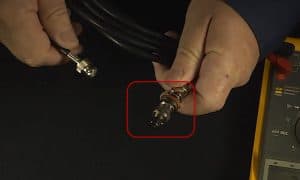 Then test the other end of the cable and we want to hear a tone. 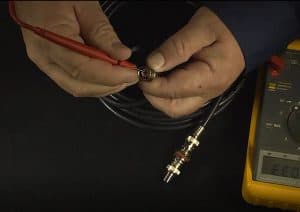 We will connect it to the outer shield and to the center. We should now hear a tone.

The last thing we can do with a multimeter is to attach a terminator to one end and check the ohms in this terminator, because remember, that when we are using a coaxial cable, we have to have a terminator on each end and the terminator has to match the cable. 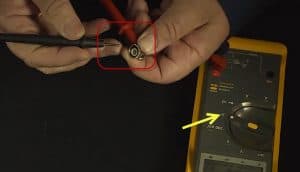 Then use the probe which is going to be the hound and find this cable. Let’s say, for instance, we have a cable run that has 50 cables in it. We don’t know which cable is the cable that the target but the tone generator can be used to find it.

Here is an example of a tone generator with a fox and hound. 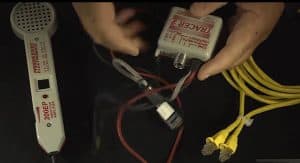 We can connect it to one end of the cable.

Let’s assume that this cable isn’t tied together like it is in the image. We wouldn’t be able to see the other end because it could run through the wall. We now can turn on the tone generator and then use the probe or (the hound) in order to locate it. 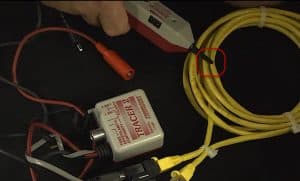 What we will do it touch each of the cables in that cable run until you hear a buzz. The tone allows us to find that individual cable inside that big bundle of cables.

Personal story. I have a cable run that runs through my garage at home for our cable system. I didn’t run it. I took this Tone Generator and Probe home and connected it to my F connector in the garage and then went out to the cable box and used the probe and touched each cable until I found the cable that I had connected to and found that cable wasn’t connected at all. I could’ve done one cable at a time where to connect the TV until I did it that way. This allowed me to find that cable. Again, this is a handy environment especially if you are looking for a damaged cable from one end of the other.

A TDR or an OTDR, it’s used to determine the distance of a cable run.

If you are certifying cables, it allows us to determine the distance.

We attach a TDR to one end of the cable. Then we will tell the program what type of cable it is such as twisted pair, coaxial, or fiber. If it’s fiber, we will tell is it single‑mode fiber or is it multi‑mode fiber. Then we will plug that into the TDR until you hear a pulse. It’s either going to be a light pulse or a sound wave. It pings down the cable.

Now it goes down the cable and when it gets to the break…Think about the break, it’s kind of you’re at the Great Canyon you holler, “Hello.” You wait for a few seconds and you hear the hello back. When I get to the end of the cable, I’m going to get an echo. Remember that’s why we have terminators on our coaxial cable to prevent this echo or bounce back.

Now, when it gets back to the TDR, the TDR knows what type of cable you had so it does a computation on time. How long did it take that signal to travel down the cable and back? Then it can it compute the distance to where that break is.

This is used to find breaks in cables. It’s also used to be able to go in and certify our distance of our cables inside of our buildings.

We looked at some of those common tools that we use to test cables inside of our environment.

This content is from our CompTIA Network + Video Certification Training Course. Start training today! In this video, CompTIA Network + instructor Rick Trader demonstrates how to use cable testers in network environments. Let’s look at some tools that we can use to test our different cables in our environment. Cable Testers Properly Wired Connectivity … END_OF_DOCUMENT_TOKEN_TO_BE_REPLACED

Video transcription Steve Fullmer: In our Windows training courses, we often share information about the Windows 8.1 Mobility Center. Mobility Center was introduced for mobile and laptop devices in Windows 7. It’s present and somewhat enhanced in Windows 8. Since we don’t have mobile devices in our classrooms, I decided to take a little bit … END_OF_DOCUMENT_TOKEN_TO_BE_REPLACED