3 Problems That Occur When Deploying in the 2.4 GHz Band in WiFi Networks

Home > Blogs > Wireless > 3 Problems That Occur When Deploying in the 2.4 GHz Band in WiFi Networks

3 Problems That Occur When Deploying in the 2.4 GHz Band in WiFi Networks

For instructor-led Wireless training, see our 5-day course: WIRE400: Wireless Networking for the IT Professional

We’re going to start by looking at the frequency Channels that you assign in the 2.4 GHz band, when you’re deploying WiFi access point. 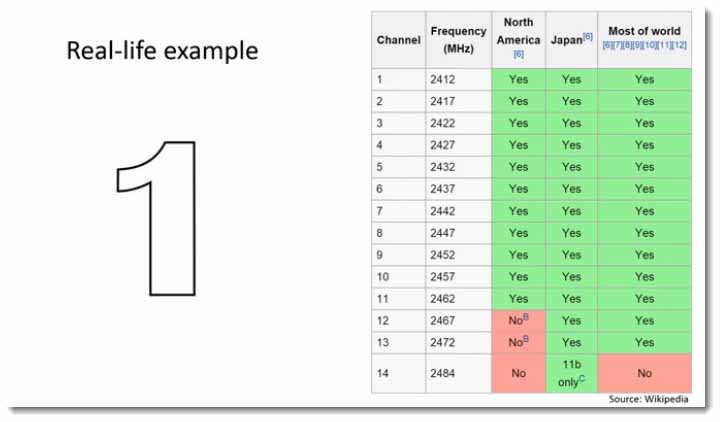 Then we’re going to look at a common misunderstanding that occurs when you’re deploying 802.11n in the 2.4 GHz band, in terms of the achievable data rate. 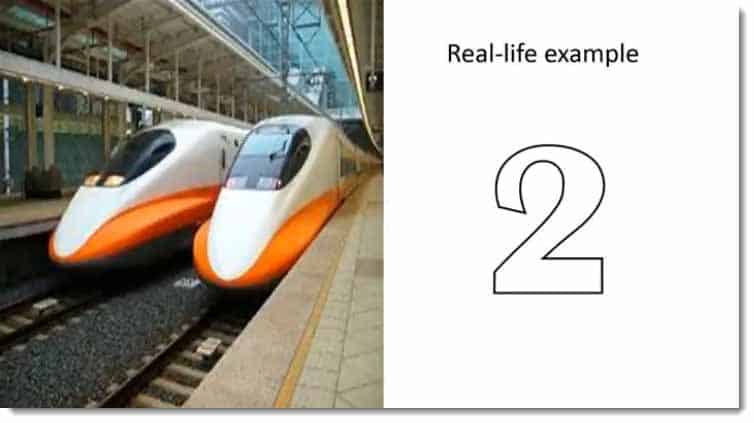 Our third example is much more subtle. 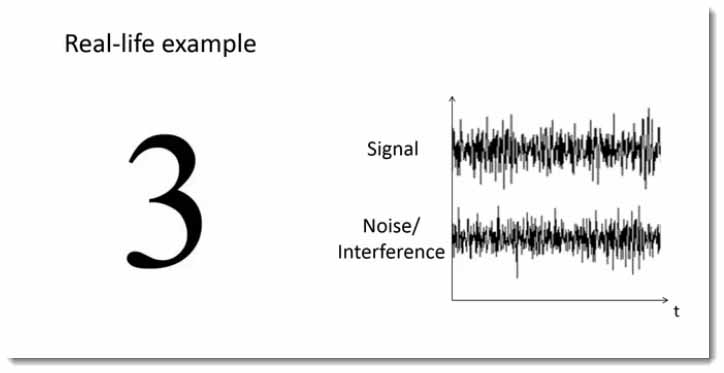 Our third example, we’ll be looking at common mistakes Engineers make when trying to assess the signal to noise level, as to whether or not they have good WiFi coverage.

Let’s start with real life example, number one. A look at the frequency Channels in the 2.4 GHz band, and how to assign a Channel to a wireless access point. We’ll see in this list that in North America we can use Channels 1‑11. 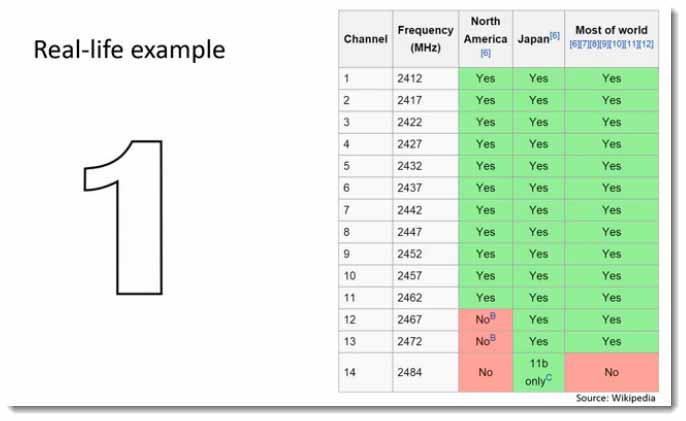 The mistake that most people make is they don’t distinguish between Channel numbers and Channel bandwidth.

We need to understand how Channel numbers are assigned and then what is Channel bandwidth.

If we look at this list of Channels that we can deploy WiFi on, in the 2.4 GHz band. 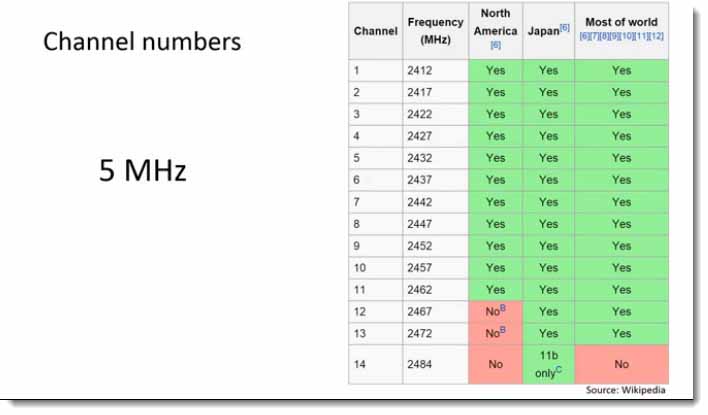 When we go to Channel two, it increases by 5 MHz. Then Channel 3, again increasing by five MHz. 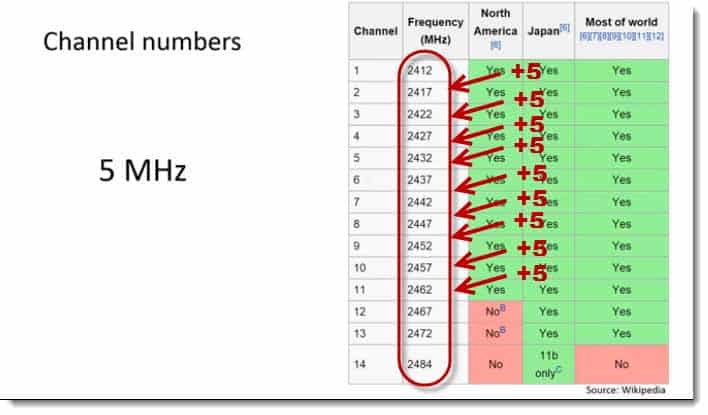 Each of these Channels is 5 MHz apart. In other words, the spacing between Channel numbers, for WiFi deployment in the 2.4 gigahert band is 5 MHz.

In this live deployment, in a hotel in Denver, they have decided that they will deploy the access point using all of these Channels.

You can see here is the central frequency of the access point deployed on Channel 1, Channel 2, etc.

It’s a common misunderstanding, that when we look to configure our access point, and we’re given a choice of Channels 1‑11, that this IT professional had just gone ahead and deployed those different Channels to their access points. 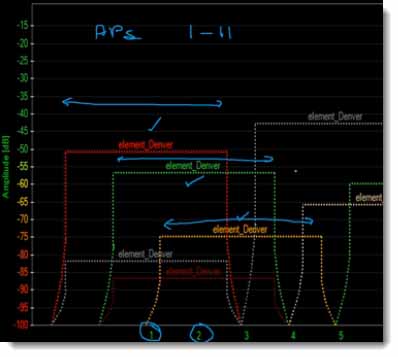 Which means that, if you deploy access points on Channel 1, 2, 3, 4, and 5, these will interfere with each other because they’re overlapping Channels. 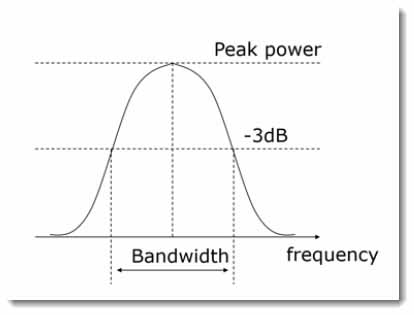 Channel Bandwidth is the bandwidth that the signal occupies when it transmits.

Let’s say I’m transmitting on Channel 1. My signal will spread over a band. 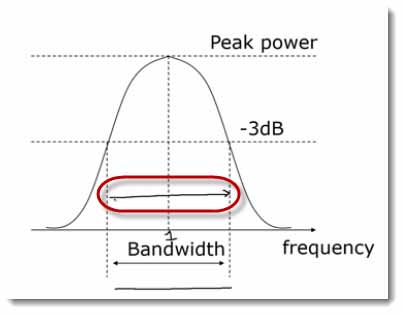 How wide is that band? That depends on the technology.

Because our Channels are actually spaced 5 MHz apart, what happens if you use Channel 1 and Channel 2 is that those allocations will therefore be overlapping.

If you’ve got an access point, here on Channel 1, that’s broadcasting out, and you have another access point that’s adjoining to it, that is broadcasting to Channel 2, then these are going to interfere with each other, because the Channels are overlapping. 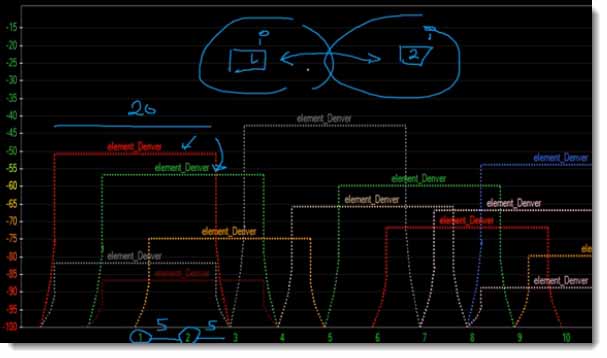 Therefore, for deployment in the 2.4 GHz band, you should use Channel 1, Channel 6, and Channel 11. 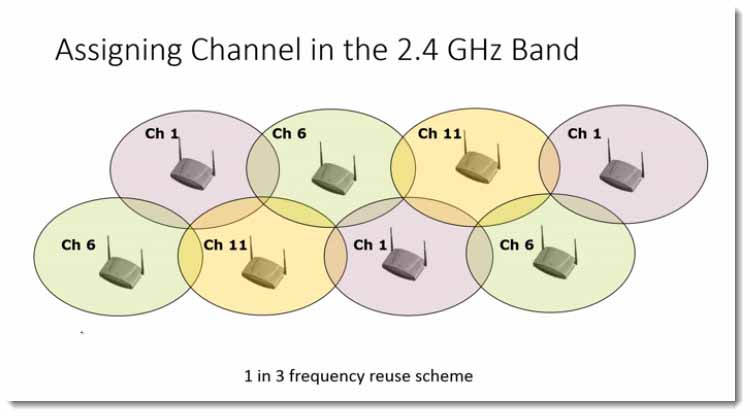 By deploying them in a pattern, referred to as a One in Three Frequency Reuse Scheme, then you can reuse the channels some distance away.

Let’s go on to our second real-life example. 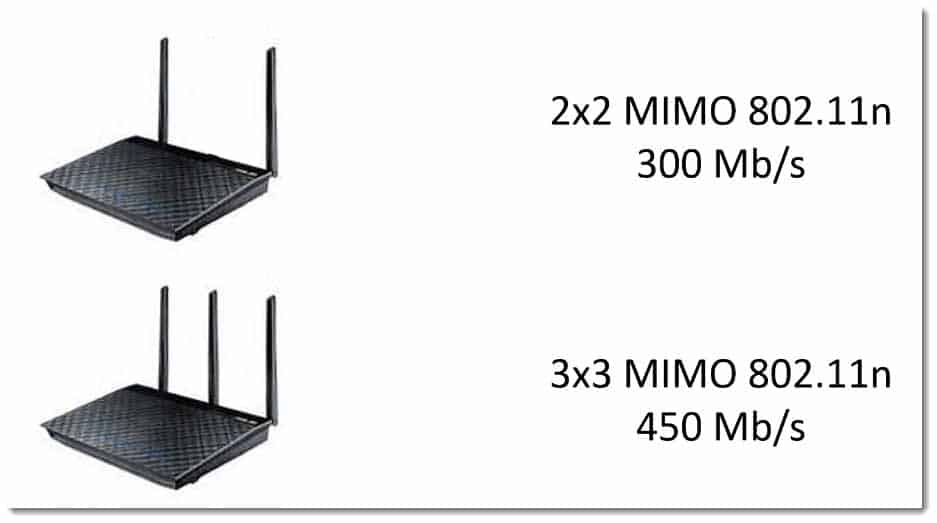 But have you been disappointed that you can’t actually achieve these data rates? One of the reasons is if you’re deploying 802.11n and you want to achieve these higher data rates then you need to deploy it in a 40 MHz channel. 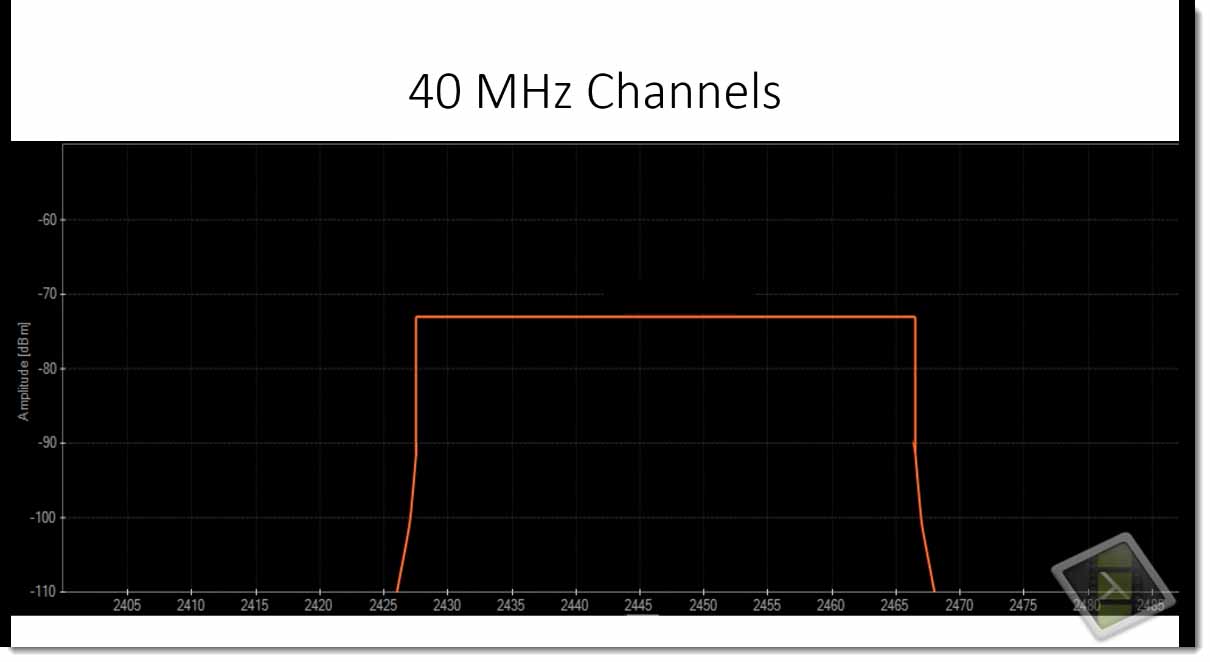 You can see in this example, that I have indeed got a 40 MHz channel.

But you will also noticed that if I’ve deployed one access point in a 40 MHz channel then I don’t actually have any spectrum left to deploy a second 40 MHz channel.

If you’re wanting to deploy more than one access point in the 2.4 GHz band, then there is simply not enough room to have two access points both operating on a 40 MHz channel without these channels overlapping and interfering with each other. 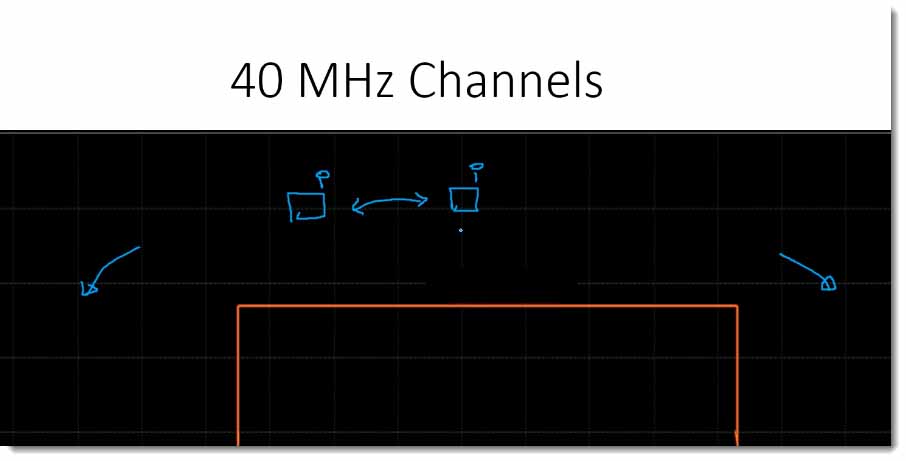 In other words, unless you have a deployment that just has one access point then you need to deploy “N” in a 20 MHz channel in order to avoid interference between adjoining access points. 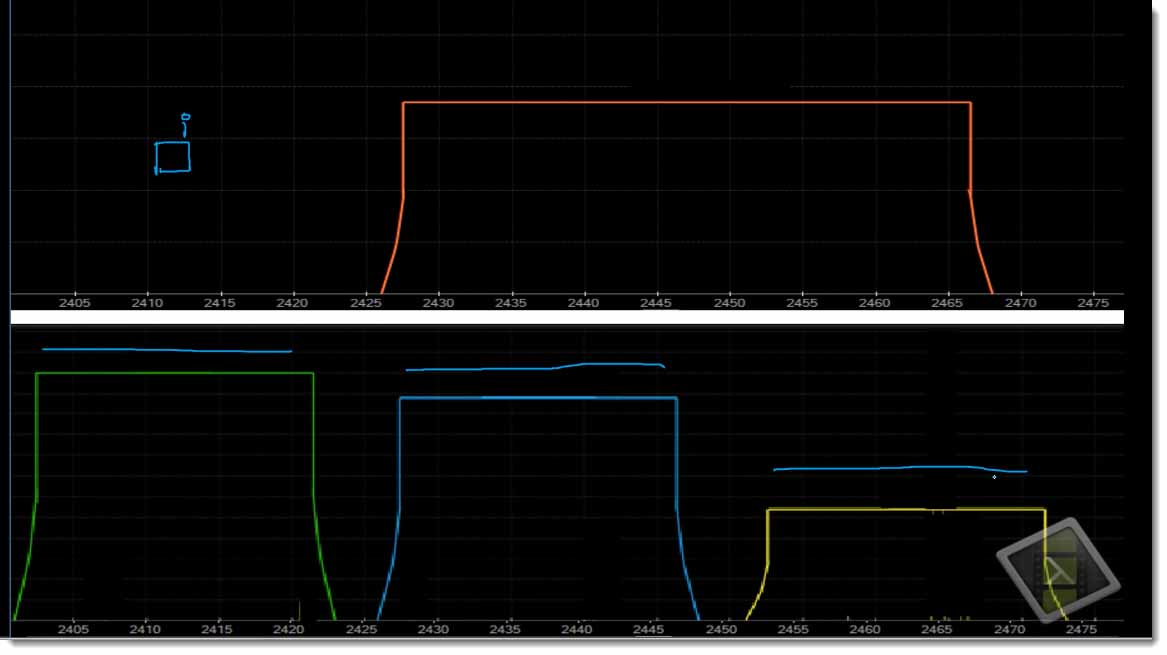 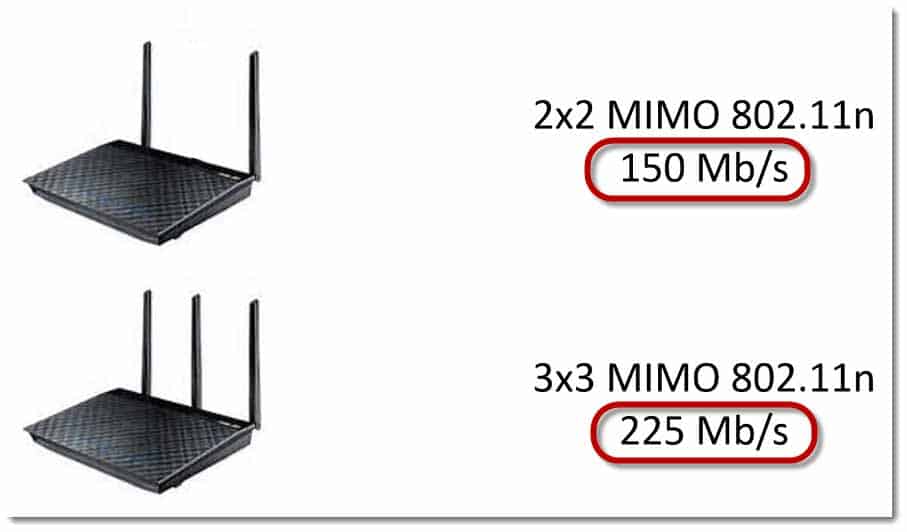 In other words, if you buy a 2×2 MIMO 802.11n device and deploy multiple in the 2.4 GHz band, then your theoretical maximum data rate in good RF environments would be halved to just 150 Mb/s. And the 3×3 MIMO 802.11n that you thought would give you 450 Mb/s because you’re only deploying it in a 20 MHz band the maximum theoretical data rate gain will be halved to 225 Mb/s.

This can often result in people being rather disappointed with the equipment that they bought. Their expectations on what data rates they thought they were going to get has not been satisfied. 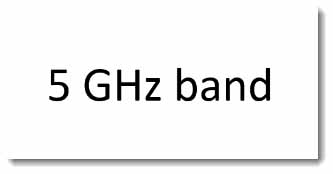 Now if you do want to achieve the maximum theoretical data rates for an 802.11n device then your solution is to deploy it in the 5 GHz band.

In the 5 GHz band, you have a lot more spectrum available and you will be able to deploy multiple 40 MHz channels.

Real-life example number 3 is much more subtle and a very common mistake that very good IT Professionals will make.

When deploying a WiFi Network, it is important that you have enough signal strength over any interference and noise that is occurring within the band such that you can recover the signal. 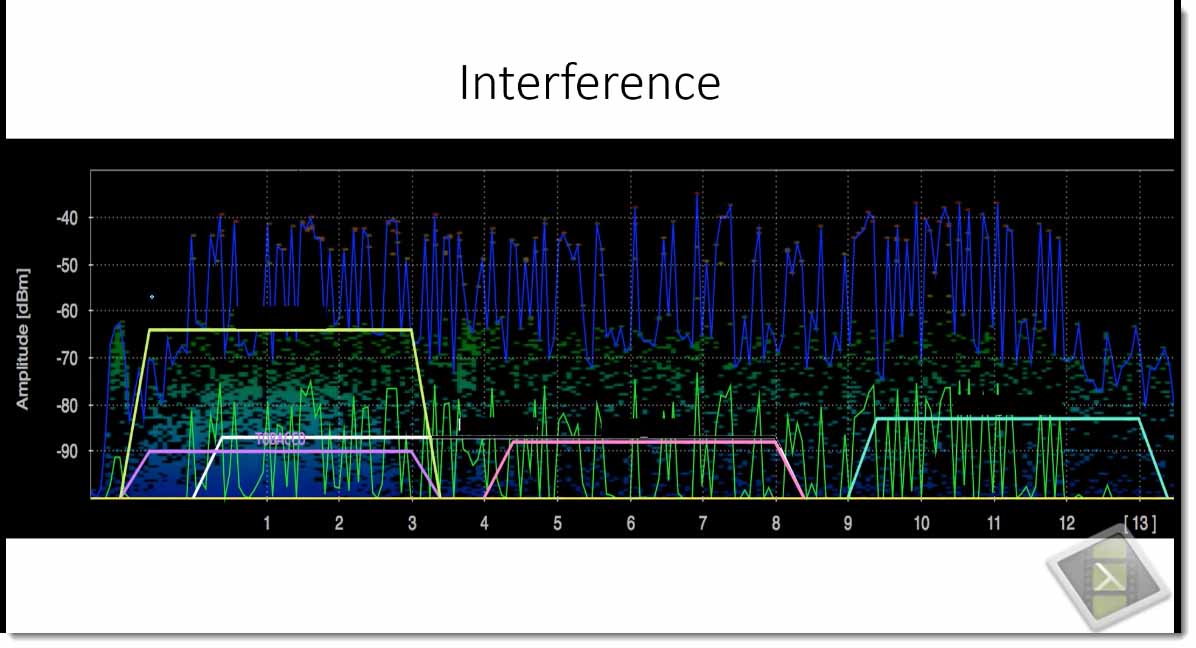 This is a real-life deployment. The engineer was out looking at the signal strength of the network and you can see that in this particular RF environment, there was a significant amount of interference. 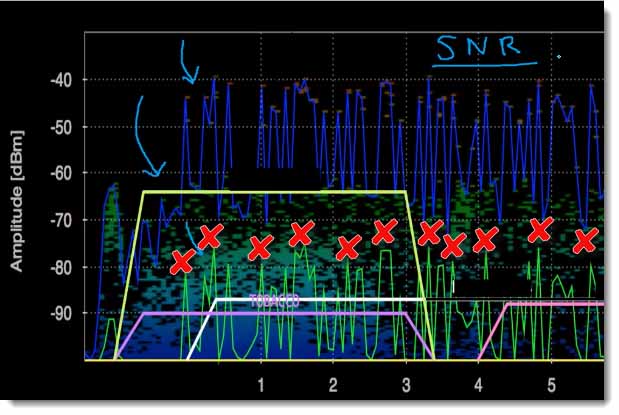 When you look at this type of interference, it’s kind of a “hopping” across these different frequencies going backwards and forwards, they are like short spikes. Quite often, this is caused by Bluetooth radios that are also operating in the 2.4 GHz band. 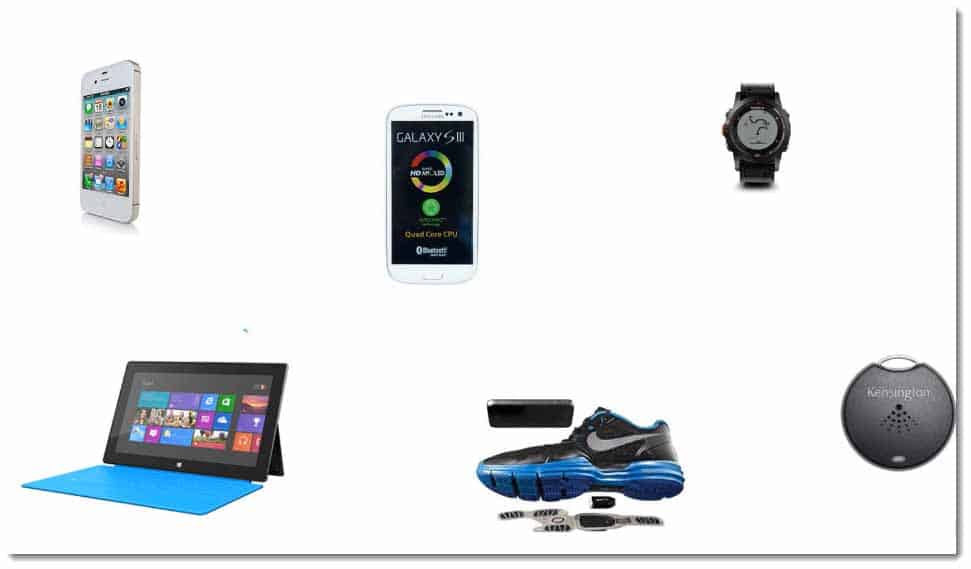 There are many different Bluetooth that we own and use. Even though all of this equipment is low powered, if you are close to this equipment while you are taking your measurements, you could see some very strong interference. 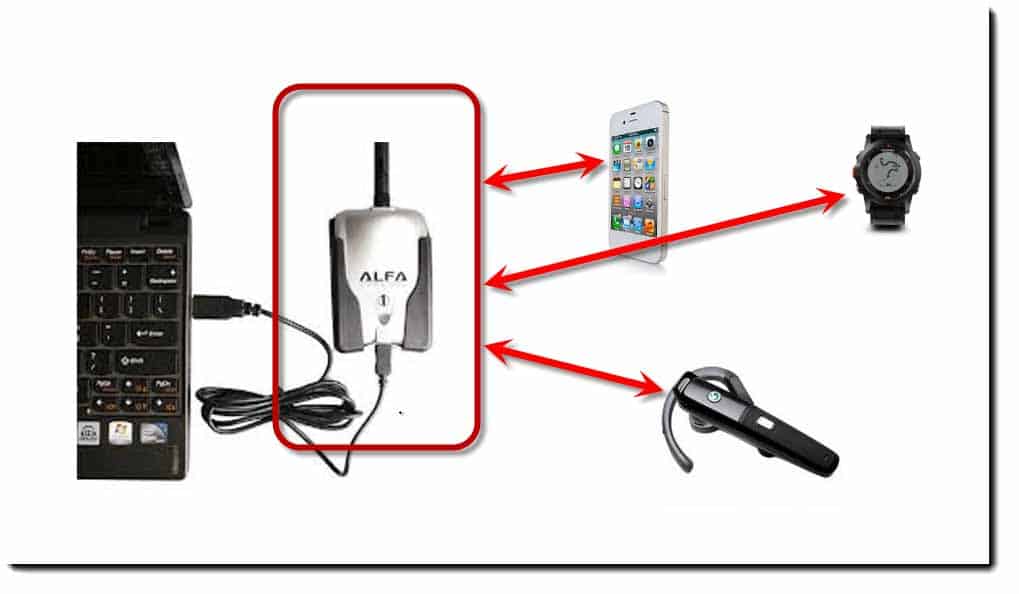 The problem that this particular IT Professional had done he was taking his measurements when he was looking at the spectrum and the signal strength, he actually had his own personal equipment operating in a close proximity to the equipment he was using to sniff the WiFi network. 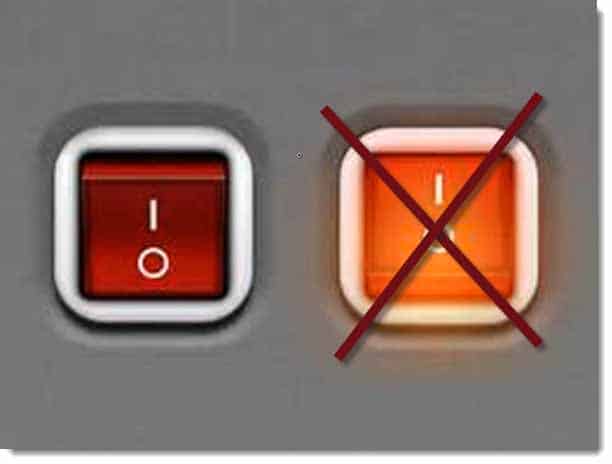 So when you are doing spectrum analysis and looking at signal strength, you need to make sure that you are not the source of interference. Particularly if you have devices operating very closely to the equipment that you are using to detect the signal and the noise.

So the message is, turn off your equipment.

I hope you enjoyed this short video of issues that can occur when deploying WiFi in the 2.4 GHz band.

I do hope you enjoyed it and if you did, please do come back and take our 5-day Wireless course WIRE400: Wireless Networking for the IT Professional at Interface Technical Training in Phoenix, Arizona. You will join me and we will go through a lot more detail and have a lot more fun about how you actually plan out a WiFi network, how you configure, deploy and then subsequently manage that WiFi Network. We get into a lot more detail going beyond “G” and “N” and looking at 802.11 ac and a lot of the antenna issues as well. I look forward to seeing you in our 5-day course.

This content is from our CompTIA Network + Video Certification Training Course. Start training today! In this video, CompTIA Network + instructor Rick Trader demonstrates how to use cable testers in network environments. Let’s look at some tools that we can use to test our different cables in our environment. Cable Testers Properly Wired Connectivity … END_OF_DOCUMENT_TOKEN_TO_BE_REPLACED