A Primer on Joins

A Primer on Joins

The golden rule of OLTP database design is that every table should represent one, and only one, entity-type. Without this rule, databases can exhibit three data anomalies (insertion, deletion, and update anomalies) that undermine data integrity. But adherence to the rule comes at a price of greater overhead (though it is a price well worth paying for data integrity). Data are spread out among more tables and so queries will have to do more work to bring together (or join) all the tables it needs (this overhead can be greatly reduced by running queries against an OLAP database instead, such as a data warehouse as we see in the data warehouse course 10777: Implementing a Data Warehouse with SQL Server 2012 SSIS).

So, what are joins, how do they work, and when do we use them? I’ll answer these questions with a few examples. If you want to follow along by doing, run the following script in your SQL Server Management Studio. It’ll create a database with two tables, SalesPerson and SalesOrder, related to each other by a foreign key in the SalesOrder table. When you are done with this article, you can issue a DROP DATABASE SalesRecords command and your server will be back to normal.

Joins are necessary in queries that must use data from more than one entity-type. To see how this is, let’s have a look at our two tables. 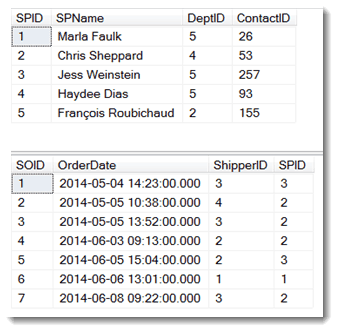 Let’s say we need an answer to this question: “What departments have used shipper 2 for their orders?” Department ids are in one table and shipper ids are in the other table. A query that answers this question will need to join the two tables.

How Does a Join Work?

A join is an operation of a query that brings together two table-type objects so that data in both can be used by the query.

A join has two inputs and one output. Inputs can be any table-type objects, including tables, views, table-valued functions, and other queries (though I’ll refer to the inputs of a join as tables in this article for simplicity). The two inputs must have a common column—usually a primary key/foreign key pair. 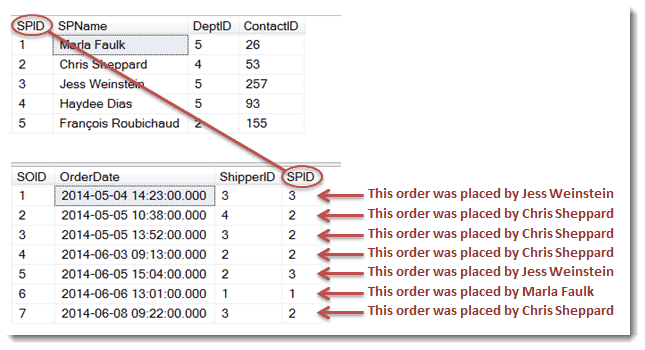 Here’s a query with a join that brings the two tables together on the common column, SPID (though our example uses two columns with the same name, common columns can have different names). This statement also creates aliases for the two tables, sp and so, that are then used throughout the query as needed.

We can now select only the columns we want and refine the query so that we answer our original question about which departments used shipper 2. As you can see in the result of this next query, departments 4 and 5 both used shipper 2.

Every join is either an inner join, an outer join, or a cross join.

Inner joins have a tendency of eliminating rows. Don’t be surprised if you see a reduction in rows when you use an inner join to add a table to your query!

By the way, the inner join can be written to include the optional world, INNER. The following query is identical to the one we wrote earlier without the word INNER:

Let’s say the sales manager wants to find out which sales people do not have sales orders. In the following query, the SalesPerson table is preserved and the result now includes the two sales people with no orders—the ones with SPIDs 4 and 5 that were eliminated by the inner join we wrote earlier. Notice the NULLs in the columns of the table where there are no matches.

Finally, to answer the sales manager’s question about which sales people do not have sales orders, we need only filter our outer join to show only those rows with a NULL in the primary key column of the SalesOrder table, since the only way that a primary key can have a NULL in it is if there is no match! We’ll also ask the query to display only the SPID and SPName columns.

This type of exception question, “Which rows in this table have no matching rows in that table,” is a typical application for an outer join. Questions such as, “Which employees do not have resumes on file?”, “Which customers have not placed orders in the last six months?” and others can all be answered with outer joins.

But perhaps an even more common use for the outer join is when we need optional data. Optional data are data from another table that would be nice to have in a query but are not necessary to include if they don’t exist. In other words, if any rows in our query do not have matches in the new table, we don’t want that to be a reason to eliminate those rows that are already in our query. As an example, the previous outer join could have been used to fulfill the following request, too: “Show me all sales people and include their orders if they have any.”

The cross join is being mentioned here only for the sake of completeness. It is not a common join and should actually be avoided if possible, because it has a tendency to suck up resources. A cross join is a join that matches every row in one input to every row in the other input. For example, let’s say we want to match up every customer in the Customer table with every promotion in the Promotion table. The following cross join can accomplish that, assuming the two tables, Customer and Promotion, exist in the database:

In this video, you will gain an understanding of Agile and Scrum Master Certification terminologies and concepts to help you make better decisions in your Project Management capabilities. Whether you’re a developer looking to obtain an Agile or Scrum Master Certification, or you’re a Project Manager/Product Owner who is attempting to get your product or … END_OF_DOCUMENT_TOKEN_TO_BE_REPLACED