As we see in the SQL 100 and SQL 250 courses, and as we further explore in this article, joins are used in queries that need to access data stored in more than one table (served up either by the table itself, views, or functions). This article introduces the concept of the “join path” and then uses the AdventureWorks database to explore join paths as a way to identify the tables to include in a query. This article also makes the case that, when there is more than one join path between two tables, each one can produce a different query result, so it’s important to choose carefully to maintain the intent of the query.

Tables are not the only things that can be joined in a query. Views and functions can also be joined. This article keeps the focus on tables for simplicity, but every time we join a table in this article, we could be joining a view or function, too.

First, it’s important to distinguish between joins and relationships. Relationships between tables are defined in the structure of the tables themselves using primary and foreign keys, whereas joins are operations in a query that bring together related tables; joins are usually performed among related tables unless there is a good reason to do otherwise (here’s an example of a query that does otherwise: How to Use Values from Previous or Next Rows in a SQL Server Query and we’ll also get a chance to see a simpler example in this article).

Let’s work through a few examples of join paths to get a better handle on all this.

A direct join path is one that goes from one table to another without any additional tables needed. 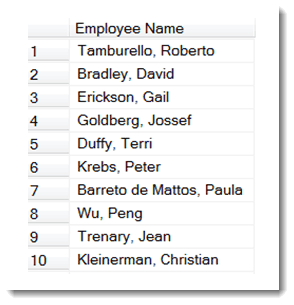 What tables are needed to produce this result? Well, employee’s names are in the Contact table and their salaried flags are in the Employee table, so we’ll need those two tables. A direct join path is available in this case, because the two tables are directly related to each other.

The direct join path can be used in this query because the results it produces are consistent with the intent of the query (this will become clearer in the next example when we have a choice between more than one join path).

Can there be more than one direct join path between two tables? Sure. Let’s look at a query that lists the sales order number, the order date, and the city of the bill-to address. Here’s a sample of the query result: 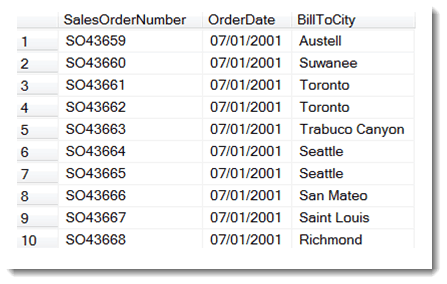 What tables are needed to produce this result? Well, the sales order numbers and order dates will come from the SalesOrderHeader table and the bill-to addresses will come from the Address table, so we’ll need those tables. Are the tables directly related to each other like in the previous example? Not only are they related, but they are related twice. The SalesOrderHeader table has two foreign keys in it, each of which references the primary key in the Address table: 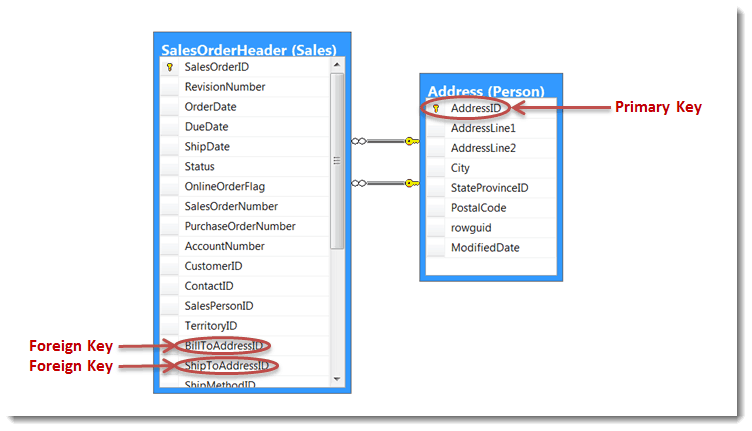 With two direct relationships between these tables, there are two different direct join paths available. Which one should we use? Does it matter?

There is nothing that prevents us from showing the cities of both the bill-to and ship-to addresses in this case. We just need to join the Address table a second time using the other direct join path. What’s important to keep in mind here is, again, that different join paths produce different results, so if we include two join paths between the same tables, each one will give us something different. 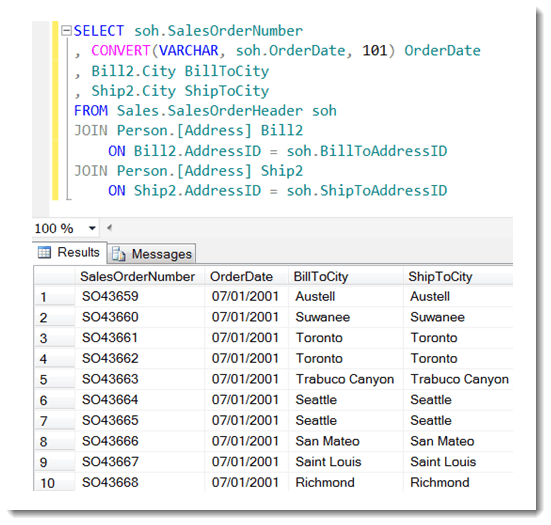 Direct join paths are relatively simple, but they’re not always available or they don’t always produce results that are consistent with the intent of the query. When we can’t use a direct join path, we must find an indirect one. An indirect join path is one that joins two tables together through other tables.

Let’s say that we want to write a query that shows, for each product, all the sales people who have sold that product. We want the query to list the product name, the sales person’s ID, and the salesperson’s YTD sales. Here is a sample of the query result: 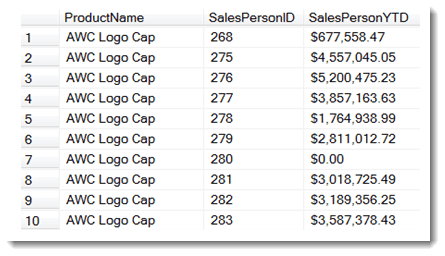 What tables are needed to produce this result? Well, the product names are in the Product table and the salespersons’ IDs and YTD sales are in the SalesPerson table, so we’ll need those two tables. Since the two tables are not directly related to each other, there is no direct join path available in this case. We’ll have to find a join path through other tables.

A join path created along either the green or red relationship lines would be an indirect join path because it would join the SalesPerson and Product tables through other tables. Notice that, even though we don’t use data from any of those other tables in our query, we still need to include them in the query to select the relevant rows from the two tables from which we do want data.

This next example further highlights how different join paths can produce very different results. In the partial diagram below of the same AdventureWorks database, we see three paths—shown in red, green, and blue—between the Employee and Address tables. 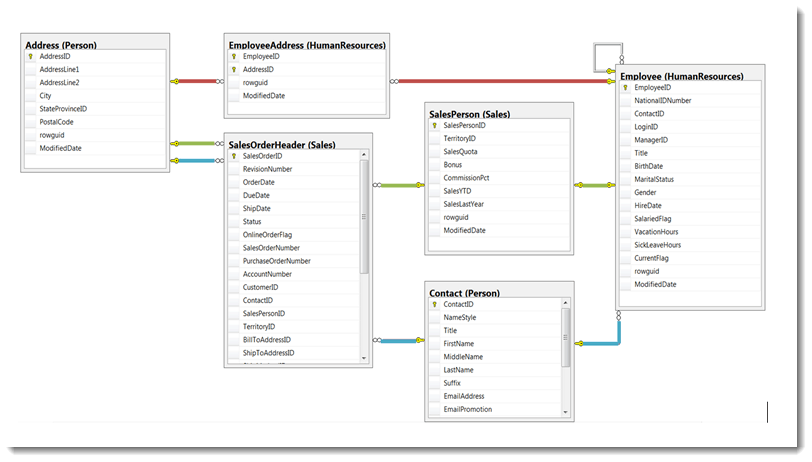 What if there are direct and indirect join paths available between two tables we want to join? Can we say that we should always use the direct join path over an indirect one? After all, direct paths are simpler and they don’t weigh the query down so much with other tables. But remember, join paths should be chosen based on how consistent their results are with the intent of the query; it will do you no good to have a simple join if it gives you apples when you want oranges. Have a look at this:

Example 4.1. Direct Join Paths Are Not Always the Best Choice

Let’s say we want to write a query that shows all customers who have orders with total due values over $1,000. The query needs to list the customer’s name, the sales order number, and the total due amount. Here is a sample of the query result: 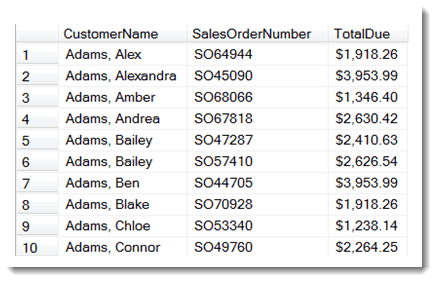 Looks like we’re on easy street again! All we have to do is join the two tables on the ContactID and we’re done, right? Wrong. 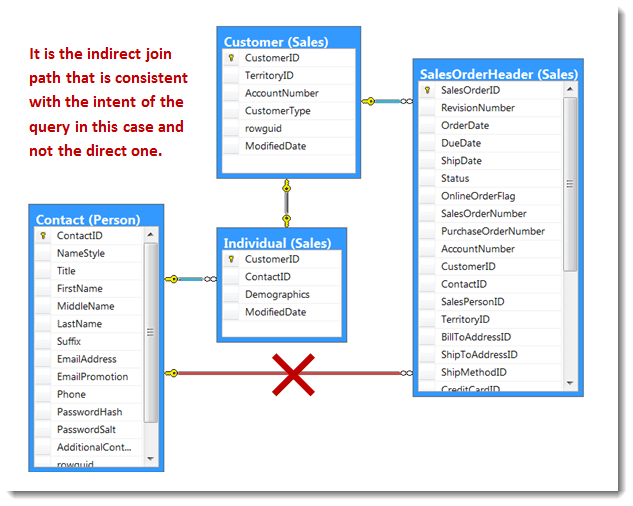 Join paths provide a useful tool to help us identify the tables we need to include in a query. When more than one join path exists between tables—whether direct, indirect, or both—they can each produce very different query results. The join path you choose must be consistent with the intent of your query if you don’t want unintended results!