I recently came across a problem that required having to perform a calculation in a query that involved a value in the current row and a value in the previous row.  The problem is that SQL queries perform operations on a row-by-row basis; accessing data on different rows at the same time requires the query to do some extra work.

In SQL Server versions prior to 2012, you need to perform a join using a row enumerator to match up rows with previous or next rows. In 2012 and higher, there are two functions, Lag() and Lead(), that greatly simplify the process.

I’ll describe the problem I ran into and show you how to implement a solution using both SQL Server versions 2005 – 2008 R2 and SQL Server 2012.

Set Up the Data

Before I get to the problem, here’s a script you can run to set up an environment for this example in case you want to follow along by doing. The script creates a database called UserManagement and then it creates and populates a table called UserActivity. When you’re done with this article, you can simply drop the UserManagement database to clean things up.

To understand the problem, let’s look at the UserActivity table after running the script above. Notice that each row is either a logon or logoff activity and that, when shown in order by user and activity time, it’s logon, logoff, logon, logoff, and so on. 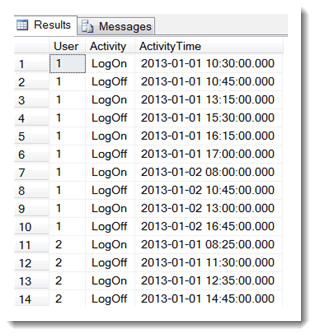 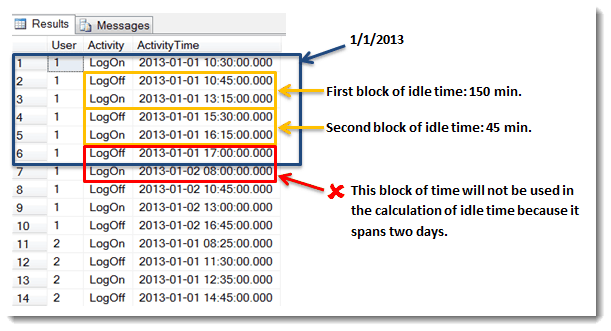 To calculate the idle time, we’ll need to find the difference between the time in a logon row and the time in the previous row. That’s the obstacle to be surmounted, here. Remember, SQL queries perform operations on a row-by-row basis. This business of accessing previous or next rows requires some minor acrobatics in SQL Server 2008 R2 and previous versions. Let’s see how to do it.

Next, we’ll need to join them so that a logon row is paired up with its logoff row. To match up a row with its previous row, we can enumerate the rows of the UserActivity table and include that enumeration in the two derived tables (rows in LogOn will all have odd row numbers and rows in LogOff will all have even row numbers). We can then join row x in LogOn to row x-1 in LogOff.

To make sure matched rows are for the same user and activity date, we will also include those two fields in the join condition when we write the query.

To implement this solution, we’ll use the Row_Number() function, the OVER() clause of a SELECT statement, a CTE and an inner join. I’ll show you the query now and then discuss it in detail below. 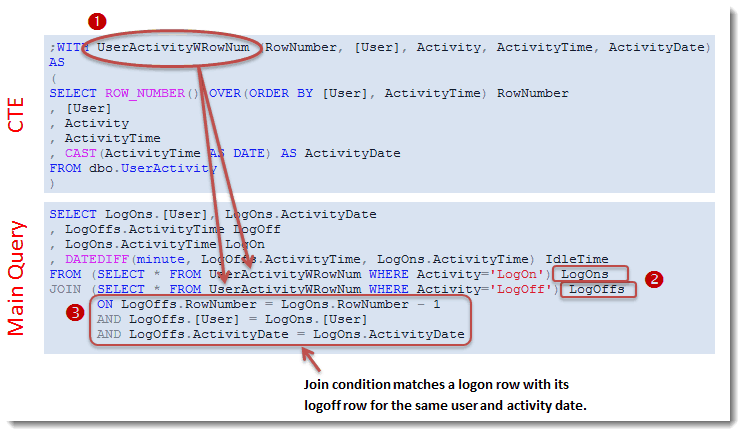 Here’s how it works:

A Solution Using SQLServer 2012 or Higher

SQL Server 2012 introduced the new Lag() and Lead() functions that encapsulate all the logic of “reaching” back or forward respectively by any number of rows. We just need to tell it what value to retrieve from a previous row (either a column or an expression that references one or more columns), how many rows to go either back or forward, and the order of the rows or the “scale” over which it knows what a “previous” or “next” row is. We use parameters to tell it the first two. The order of the rows is specified using the OVER() clause with ORDER BY.

In the query below, the Lag() function is used to determine the idle time. It is the second argument of the DATEDIFF() function. We’re telling the Lag() function to retrieve the activity time from 1 row “back” using the same order of User and ActivityTime (the Lead() function is similar but returns values in rows that follow rather than precede the current row). Note the same blocks of idle time of 150 minutes and 45 minutes for user 1 on 1/1/2013. 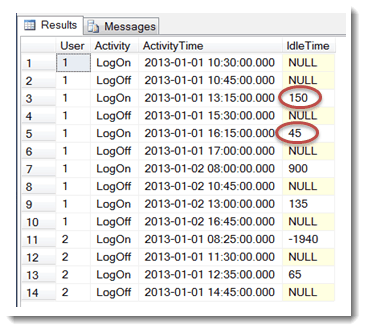 We can tweak this to get the same results we got in the join solution we saw earlier. One way of doing that is shown in the query below where we create a CTE that puts corresponding values on the same row and then filters the data and calculates the idle time in the main query.

Have fun writing queries that access data in previous or next rows!

In this video, you will gain an understanding of Agile and Scrum Master Certification terminologies and concepts to help you make better decisions in your Project Management capabilities. Whether you’re a developer looking to obtain an Agile or Scrum Master Certification, or you’re a Project Manager/Product Owner who is attempting to get your product or … END_OF_DOCUMENT_TOKEN_TO_BE_REPLACED