Contrary to popular belief, prefixing object names isn’t always a good idea and some professionals have dropped the practice entirely. To see why this is, let’s take a look at database object names as an example. Initially, it might seem like a good idea to prefix table names with “tbl,” views with “v,” and so on, so that it’s easier to identify that, say, this query:

Uses a table, while this query:

OK, that sounds reasonable enough, but consider this situation: Let’s say that changes to the mini-world one day require you to split that tblEmployee table into two or more tables (maybe new security requirements make it necessary to put some columns into one table and other columns into another table, or maybe the addition of new data into the database causes the current design to become denormalized, etc.) so that you end up with tblEmployee1 and tblEmployee2, for example, instead of tblEmployee.

Just because an object starts its life as one type of object (in our example, a table) doesn’t mean that it will remain that type forever. This is not uncommon and you can see a real-world example of it right in SQL Server. If you expand the System Stored Procedures folder of any database, you will see that most system stored procedures have a “sp_” prefix. If you scroll down to the bottom of the list, you will see some that use the prefix “xp_”. 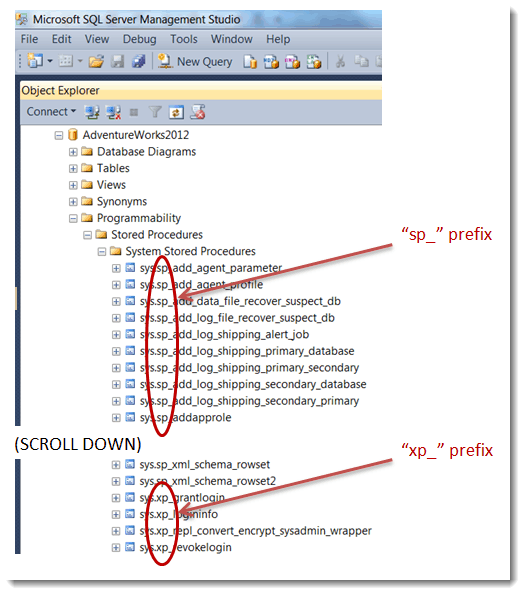 Time has a way of changing things, and prefixes assume that an object’s type will never change. The result is that, over time, prefixes that were originally put in place to keep things nice and organized end up having the opposite effect of making things messy. Many system professionals feel that a tool that has a tendency of accomplishing the opposite effect of what it was intended to accomplish becomes untrustworthy and is not worth using at all.

In this video, you will gain an understanding of Agile and Scrum Master Certification terminologies and concepts to help you make better decisions in your Project Management capabilities. Whether you’re a developer looking to obtain an Agile or Scrum Master Certification, or you’re a Project Manager/Product Owner who is attempting to get your product or … END_OF_DOCUMENT_TOKEN_TO_BE_REPLACED