Ever wonder why there are only two options under the INSERT and UPDATE Specification of a foreign key? Why is there no Insert Rule? And to which table in the relationship do these rules apply? 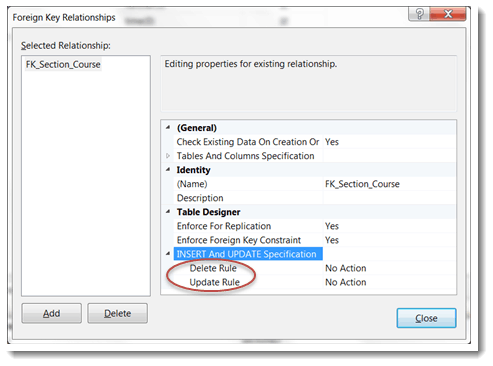 When a data modification would cause a referential integrity violation, what can the database do to prevent the violation? Disallowing the data modification is always an option. But in some cases, it has other options. In the case we just saw of the deletion of a course, the database can also prevent a referential integrity violation if it also deletes the sections that reference the deleted course (sections 1 and 5 in the Section table). This is called a cascade, because the deletion in the primary-key table is cascaded to the foreign-key table. Other options the database has are to set the foreign key to null or to its default value (as long as the default value references an existing value in the primary-key table).

The table below summarizes all the data modifications that can take place, their impacts on referential integrity, and the choices the database has in preventing the violations in each case. 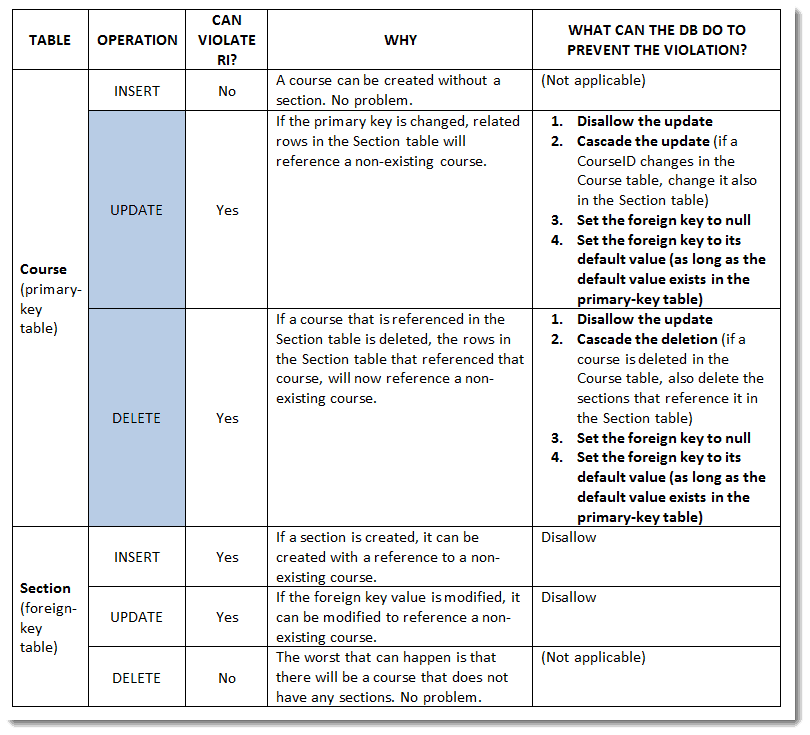 Notice that the database has choices in the event of a referential integrity violation (disallow, cascade, set the foreign key to null or its default value) but only when an update or a delete is performed in the primary-key table; in all other cases where there would be a referential integrity violation, the only action the database can take is to disallow the operation.

That explains why only the delete and update operations are represented in the dialog you saw above. It also shows that the table in which the deletions and updates in question occur is the primary-key table.

Let’s set up a simple database that will allow you to see how to tell the database what to do when an update or delete is performed in the primary-key table. Run the script below in SQL Server 2008 or higher to create a database called SchoolEnrollment with the Course and Section tables related as shown above. 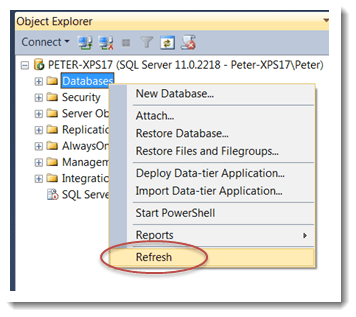 This will put the table in design mode and will display the Foreign Key Relationships window. 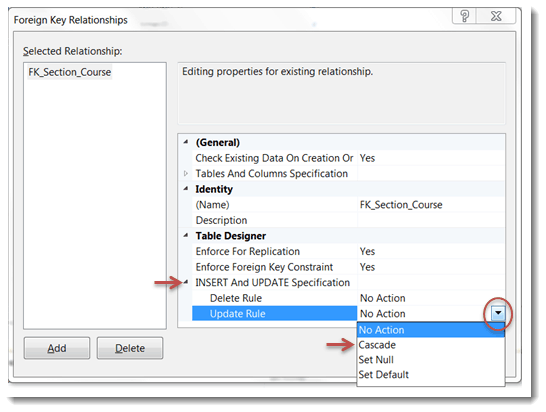 By default, no action is specified for either operation. If no action is specified, the database will not allow the deletion or update in the primary-key table if they would result in referential integrity violations. You can also select Cascade, in which case the database will allow the deletion or update in the primary-key table, but it will also cascade them to the foreign-key table as discussed above. Other choices include Set Null, which, if the delete or update will result in a referential integrity violation, the database will put Null into the CourseID foreign key on the corresponding section row(s), and Set Default, which will instead use the default value of the foreign key column if one exists.

In this video, you will gain an understanding of Agile and Scrum Master Certification terminologies and concepts to help you make better decisions in your Project Management capabilities. Whether you’re a developer looking to obtain an Agile or Scrum Master Certification, or you’re a Project Manager/Product Owner who is attempting to get your product or … END_OF_DOCUMENT_TOKEN_TO_BE_REPLACED

Is JavaScript worth taking the time to learn if I’m a server-side .NET developer? How much of C# carries over to JavaScript? In this recorded video from Dan Wahlin’s webinar on September 24,2014, Dan answers these questions and more while also discussing similarities between the languages, key differences, and the future of JavaScript (ES6). If … END_OF_DOCUMENT_TOKEN_TO_BE_REPLACED