Converting from one number base to another.  Riveting stuff!  But if you want to have confidence in your skills as A+, Network+, or CCNA certified, you don’t want to overlook this seemingly small area of study.  It is quite important because humans like to look at decimal (base 10) numbers, whereas computers work with binary (base 2) numbers.  Let’s dive right in.

Although it could be argued that the ability to make monetary change is a dying art, I use making change as a method to convert from decimal to binary.  First we start with a chart of 8 bit positions with the base number (in this case, 2) below them.  This is shown in figure 1:

The next step, which is true for number systems in general,  not just binary, is to start putting exponent values for each “2”, starting with zero at the far right, as shown in figure 2.

Below that, we put the actual value of two to that exponent, shown in figure 3.

You have probably seen this many times, perhaps even in your dreams after a studying rampage.  My trick is to imagine that the numbers underneath represent the values of imaginary coins, and I am using them to make change.  The coins might look like figure 4:

So I am down to owing 25¢.  Look at my remaining coins and I find ‘16’ to be the largest value coin that does not exceed what I owe.  Let’s grab one in and subtract it from our total figure 7:

I still owe 9.  That means grabbing the ‘8’ coin would get me closer while not exceeding the amount owed.  So I put a 1 there and subtract it from what I owe.    This is shown in figure 8:

Hey, it matches!  If you ever want to check your math, you can use Windows Calculator as it shows binary, octal, decimal, and hexadecimal numbers.  Make sure you select Programmer mode.  Let’s see the above example in Windows Calculator, in figure 10: 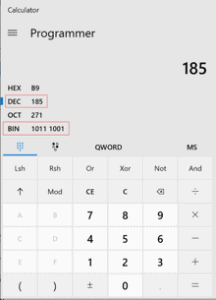 If you enjoy the mental calisthenics of making change, this method of decimal-binary / binary-decimal conversion should warm the cockles of your heart!

Video transcription Steve Fullmer: In our Windows training courses, we often share information about the Windows 8.1 Mobility Center. Mobility Center was introduced for mobile and laptop devices in Windows 7. It’s present and somewhat enhanced in Windows 8. Since we don’t have mobile devices in our classrooms, I decided to take a little bit … END_OF_DOCUMENT_TOKEN_TO_BE_REPLACED