To Cisco Routers, This Concept Is Number One!

Home > Blogs > Cisco > To Cisco Routers, This Concept Is Number One!

To Cisco Routers, This Concept Is Number One!

If you were to ask a number of networking professionals how routers make forwarding decisions, you might hear one answer far more than any other – Administrative Distance. In simplest terms, Administrative Distance (AD) is a ranking of believability. That is, if I am a router with more than one routing protocol running, to whom do I listen if each protocol is telling me about some particular destination? Well that is not a bad answer, but let’s blow one common misconception out of the water.

I have built the following scenario: 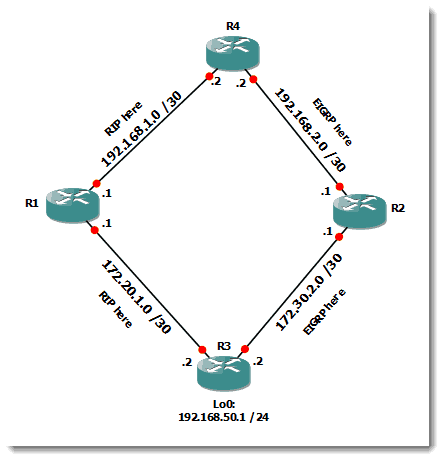 Gateway of last resort is not set

I have highlighted the relevant portions of the output above. Here is where the common misconception rears its ugly head. Many networking people, if they were asked how R4 would select a path, would respond that since EIGRP has a better AD than RIP (EIGRP is 90, RIP is 120), R4 will select the path from R4 to R2 to R3. How to verify our choice? How about a traceroute from R4 to the target destination? 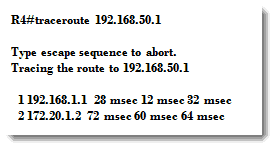 As you can readily observe from the results of the traceroute, the inclination to select best AD above all else can lead one astray. It turns out that there is another facet of router path selection which holds sway even above AD. What is it? Longest prefix match. In the diagrammed topology presented above, R4 knows about the destination address from RIP, and it matches to 24 bits. R4 also knows about the destination as 192.168.0.0, but it matches to only 16 bits. So R4 listens to RIP in this instance.

As mentioned, it is surprising to learn how many people go through the entire CCNA instructor-led training path and believe that the number one factor in path selection is AD. Let it not be said that anyone reading this blog would make the same mistake!

Until next time, happy path selecting…

In this video, you will gain an understanding of Agile and Scrum Master Certification terminologies and concepts to help you make better decisions in your Project Management capabilities. Whether you’re a developer looking to obtain an Agile or Scrum Master Certification, or you’re a Project Manager/Product Owner who is attempting to get your product or … END_OF_DOCUMENT_TOKEN_TO_BE_REPLACED