On your way to work, you stop by an ATM. Just as you are punching in your secret code, so is a family member punching in their secret code at an ATM across town. You are going to transfer $400 out of an account that has a $500 balance, and your family member is about to withdraw $300 from that same account. Were it not for isolation levels, trouble would be brewing on the horizon…

SQL Server prevents problems that can arise from concurrency situations, such as the above in which concurrent attempts to access and/or modify the same data are made, by implementing six isolation levels. This blog post will help you experience all six isolation levels. As you see them “in action,” you will understand what each one accomplishes and when to use each.

To understand the examples in this post, you will first need to understand what a transaction is and some things about isolation levels. Before we get to the examples, we will cover those topics briefly. The 10776 course, Developing Microsoft SQL Server 2012 Databases, provides a more comprehensive explanation of all the relevant topics.

The examples provided are run against the AdventureWorks database. See Introducing the Examples, below, for links where you can obtain the necessary files to run the examples on your own.

A Brief Introduction to Transactions

Back at the ATM, you were about to transfer funds between two accounts. Note that the transfer of funds involves at least two data changes; one account needs to be debited and the other one credited. Now, imagine that the debit goes through but the credit fails! You don’t want that to happen, because then you’d lose money. You want both data updates to be treated collectively as a unit of work that either succeeds or fails in its entirety. We call that unit of work a transaction. A transaction is a unit of work against a database that involves one or more changes to data that have to collectively be treated as a single unit—either they all succeed or none of them ever happened.

Here are some more examples of situations requiring multiple data changes that have to either all succeed or never happen: When data are merged into a database, several tables may need to be updated. When a customer places an order, data may need to change in an Order table, an Invoice Line Item table, and a Product table. Purchasing airline tickets may require updates to a passenger table and a reservations table. Whenever an operation requires multiple data changes that have to collectively be treated as a single unit, that’s an example of when a transaction can be used.

A Brief Introduction to Isolation Levels

Let’s see all this in action.

All examples include real word scenarios that allow you to ground all this in reality.

The Read Uncommitted Transaction Isolation Level provides no isolation at all between transactions and permits one of the most basic forms of concurrency violations, the dirty read. A dirty read occurs when a transaction can read data that have been updated in another transaction but not yet committed.

Use this on a one-user system, on systems in which the likelihood of two transactions accessing the same resources is nil or almost nil, or when using the Rowversion data type to control concurrency. 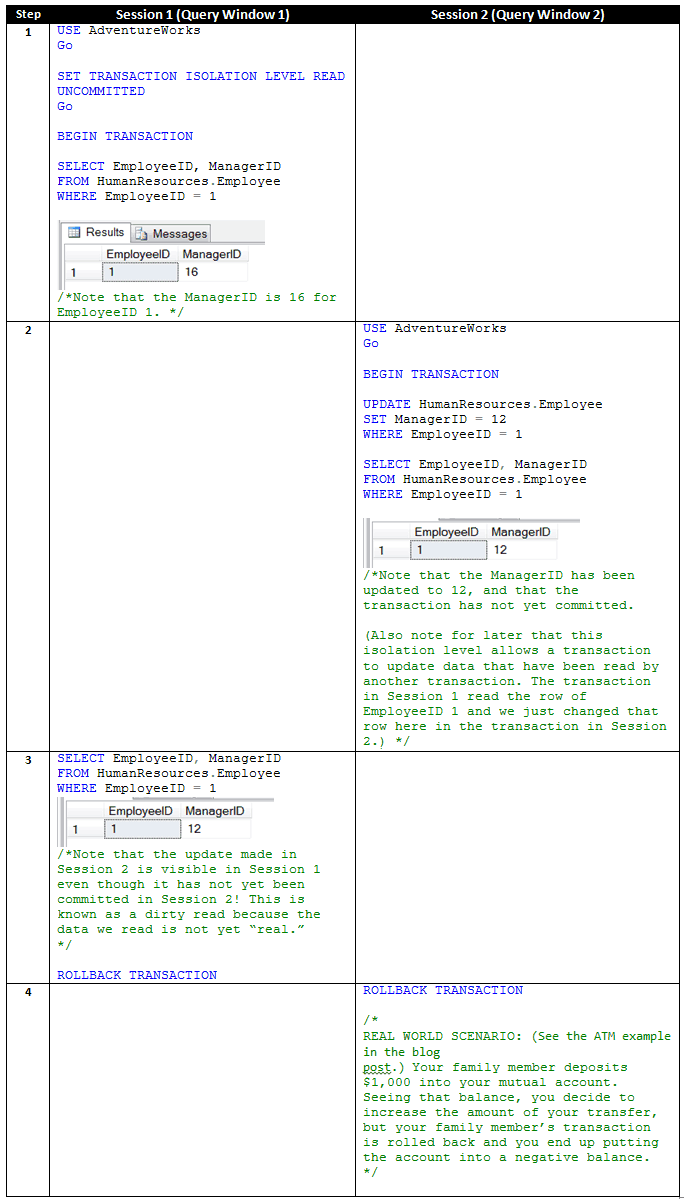 The Read Committed Transaction Isolation Level prevents dirty reads by allowing only committed data to be read by the transaction. This is the default transaction isolation level in SQL Server. 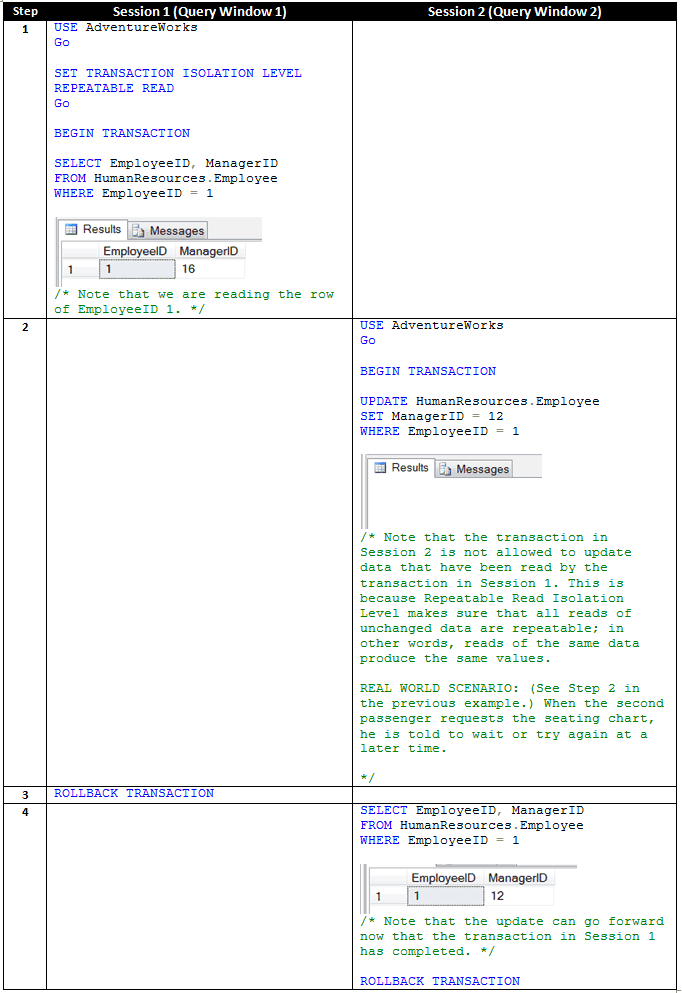 It accomplishes this feat by using row versions in TempDB to create a virtual snapshot of the database before the transaction starts. It then only allows the transaction to access that virtual snapshot. This approach is called versioning-based isolation (a complete explanation of the details behind visit Understanding Row Versioning-Based Isolation Levels.

With versioning-based isolation, a transaction sees only the data in that virtual snapshot, so other transactions can still access the same data but only as long as they don’t try to modify data that have been modified by the first transaction. If they do, then those transactions are rolled back and terminated with an error message.

Up until this point, all the isolation levels have isolated transactions from one another. Resources that are made unavailable to other transactions only become available again once the original transaction completes. The Read Committed Snapshot Isolation Level is different in this regard. It will read data that have been committed by another transaction.

In this video, you will gain an understanding of Agile and Scrum Master Certification terminologies and concepts to help you make better decisions in your Project Management capabilities. Whether you’re a developer looking to obtain an Agile or Scrum Master Certification, or you’re a Project Manager/Product Owner who is attempting to get your product or … END_OF_DOCUMENT_TOKEN_TO_BE_REPLACED

In this SharePoint training video, I want to talk about the Navigation Controls in SharePoint. They tend to fall into two kind of different categories; one with the navigation controls in a typical Collaboration Site such as a Team Site or a Project Site. These are Sites that are based on the Team Site Template … END_OF_DOCUMENT_TOKEN_TO_BE_REPLACED