Wikipedia defined throughput as “the rate of successful message delivery over a communication channel”, in other words, the number of bits per second successfully delivered from sender to the receiver. Throughput over a wireless 802.11ac network is being increased in two ways. Firstly, it increase bit rate over the air, and secondly it allows the simultaneous transmission of signals to multiple clients.

Wave 1 products increase the bit rate:
The 802.11ac products in the market today promise data rates of over 1 Gbps. The Wi-Fi Alliance certification of these products is referred to as Wave 1.
Wave 1 802.11ac products get to higher data rates by moving to a wider channel bandwidth, and increasing the modulation rate. Doubling the bandwidth from 40 to 80 MHz will more than double the data rate. 802.11ac also introduces 256-QAM, which increases the maximum number of bit per modulation symbol from 6 to 8. This results in an increase in the data rates by 8/6. These improvements can almost triple the maximum data rates. 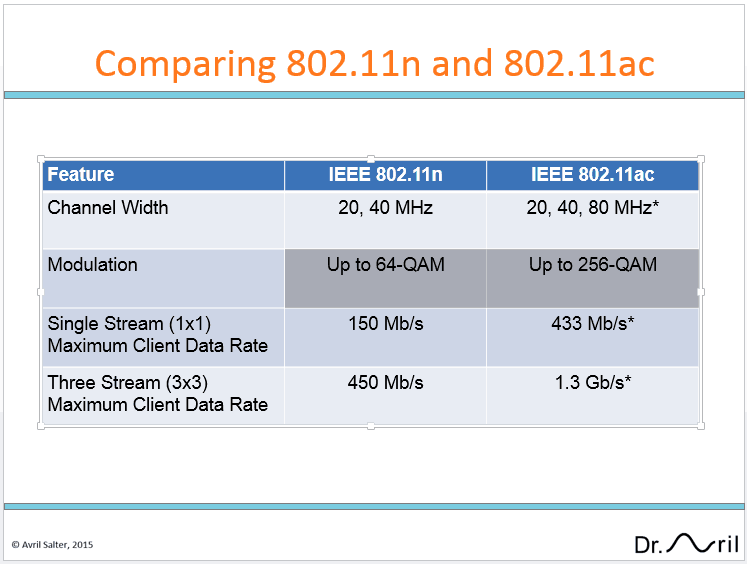 This alone may make you decide to upgrade your network to 802.11ac. However, it is important to consider other RF factors such as signal attenuation, interference, and antenna capabilities. The 802.11ac operates in the 5 GHz band only, and this band suffers greater attenuation than the 2.4 GHz band. This generally reduces coverage. Although the 5 GHz band typically suffers less interference than the over-crowded 2.4 GHz band, if there is interference the bandwidth will be reduced from 80 MHz to 20 or 40 MHz. This in turn reduces the transmitted data rate. In addition, 256-QAM can only be utilized in exceptional good RF environments. Typically 256-QAM with be implemented with beamforming, as beamforming increases the received signal strength. Beamforming is typically implemented on the more expensive enterprise Access Points.

In Wi-Fi networks today, if multiple stations transmit at the same time in the same channel, collisions can occur and data frames may become corrupted. MU-MIMO is a technique that leverages beamforming and the spatial separation between stations. By transmitting to different stations of different beams, MU-MIMO enables the transmitter to send multiple data streams at the same time in the same frequency channel. The 802.11ac standards specifies simultaneous transmissions to up to four stations at the same time, which has the potential to increase throughput 4-fold. 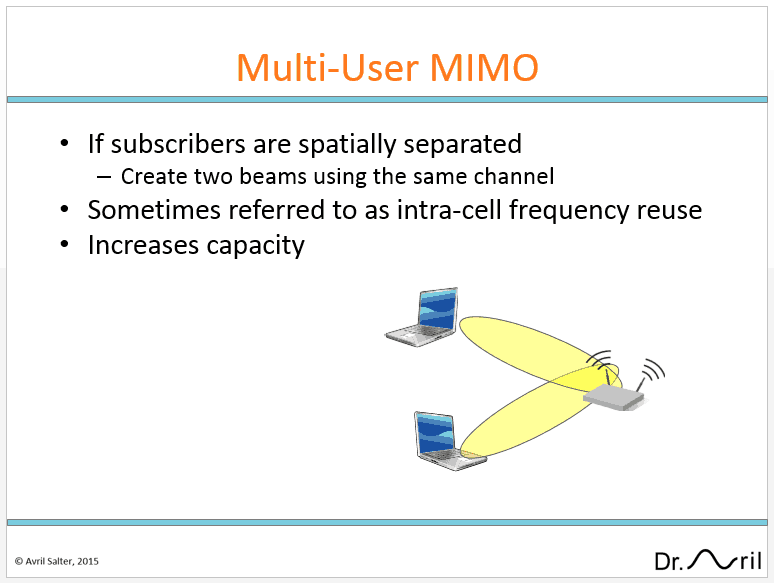 Key influencing factors:
Wave 2 products will have wider bandwidths, a high number of spatial streams, and Multi-User MIMO (MU-MIMO). Deciding on whether you should transition to 802.11ac now or wait is a fairly complex question. In addition to the normal cost benefit analysis, there are three additional factors should be examined.

1. Growth of 802.11ac enable clients in your organization.
In comparison will legacy 802.11n enabled clients, 802.11ac almost triples the data rate for effectively the same handset power utilization. As a result, handset manufacturers are adopting 802.11ac in smart phone, tablet and laptop equipment at a much faster rate. Indeed, ABI Research predicted that 70% of mobile handset shipments will be 802.11ac enabled by the end of 2015.

In organizations that have high data rate applications but also require handheld devices to last a full working day, 802.11ac has significant advantages.

2. Interference in the 5 GHz band.
The underlying premise of all 802.11ac deployments is that you are able to transmit in 80 MHz channels. Similar to 802.11n devices, 802.11ac devices will perform a clear channel assessment prior to transmitting. If there is interference or noise it will reduce the bandwidth on which it will transmit. If there is so much interference and noise that the 802.11ac can seldom transmit on an 80 MHz channel, then you will not see the performance advantages of 802.11ac. It is really important that you perform a site survey and assess your interference levels before you commit to deploying 802.11ac.

Want to learn more?
Interface is offering a new course for IT professionals, to equip them with the skills necessary to plan, configure, troubleshoot and optimize Wi-Fi networks.

Register for this course today.

WIRE400: Wireless Networking for the IT Professional
5-Day course at Interface Technical Training in Phoenix, Arizona.
Learn how to take control of your enterprises Wi-Fi network. In this 5-day hands-on course, you will learn how to plan, configure, deploy and manage a wireless network, secure and troubleshoot interference sources, identify and analyze Wi-Fi packets in Wireshark for data transfer. This course finishes with an overview of the latest next generation in Wi-Fi product enhancements for enterprise and end-users.

Video transcription Steve Fullmer: In our Windows training courses, we often share information about the Windows 8.1 Mobility Center. Mobility Center was introduced for mobile and laptop devices in Windows 7. It’s present and somewhat enhanced in Windows 8. Since we don’t have mobile devices in our classrooms, I decided to take a little bit … END_OF_DOCUMENT_TOKEN_TO_BE_REPLACED