This is an excerpt of a webinar by Dan Wahlin – JavaScript for C# Developers that was conducted at Interface Technical Training on September 14, 2014.

In this post, I’ll demonstrate some differences in JavaScript and C# where people tend to struggle.

Key Defenses between JavaScript and C#

First, JavaScript is a totally dynamic language. There is no compiler which is a little bit of a bummer if you’re used to getting the error notifications as you compile. You have to go and do what I did earlier Key concepts of C# and JavaScript Syntax and go into Chrome Developer Tools or IE Developer Tools, to figure out any JavaScript errors.

In fact, you always use “var,” as you’re defining your variables. Whereas with C#, we’re used to strongly typed applications. Also, there’s absolutely no native support currently for Namespaces or Classes. That’s a little bit of a bummer, I will admit if you are coming in from the C# world, and we’re all used to building components if you will, classes that we can build into objects and re‑use those. JavaScript doesn’t need it, we have that through ECMAScript 5, which is the current version that most browsers support. But ECMAScript 6, which we’ll demonstrate in another post, does support that concept of reusable code. There are a lot of cool things you can do with ECMAScript 6.

You have variables that are global and you have function level. But if you define something like in the loop or if statement block, that is not actually a scoped definition. We can actually step on another definition that is outside of that to watch out in the JavaScript.

One of the biggest kind of “Sharks in the water,” is the Equality Comparisons. We’ll show some demos of the features later.

With C# you can use the double equals ( = = ) and it just automatically compares if they are equal or not. You’ll see in JavaScript that it gets a little tricky, and there’s something else that I am going to show you here that you can use. I’ll actually recommend you use when you are writing JavaScript.

Finally functions in the C#, don’t stand on their by themselves. Functions are always in classes or structures or something in C#. Well in JavaScript, functions can totally stand on their own. They’re actually objects. We will be talking about that as well.

What we have is Primary, Composite and some Special Types.

The Primary Types are pretty familiar with as C# developers. We have strings. We do have numbers. But if you’ll notice, numbers are not really broken down into small, double, float, long, short and that type of thing. It is just the number. Primary types can have decimals, they can be whole numbers, that really just depends.

Boolean’s; We do have the ability to numerically evaluate a Boolean in JavaScript, unlike C# where true is true and false is false and there is no numeric equivalent per se.

In JavaScript, zero (0) is a false, a one (1) is true like several other developer languages. We also have object which is the base granddaddy of them all at the top of the hierarchy, very similar to C# in that regard.

We have Arrays, we showed list in a previous post Key concepts of C# and JavaScript Syntax.

In Special Types we also have null, which everybody is used too in the C#. But we have this other one, it is called Undefined which we’ll look at later in this post.

Instead of just checking that something is Null, you’ll often check if it is null or is it Undefined. I will show you some short cut ways that we can actually do that.

In this demo we’ll look at a few of these key language differences in C# and how they manifest themselves in JavaScript.

First half, we start with Equality. 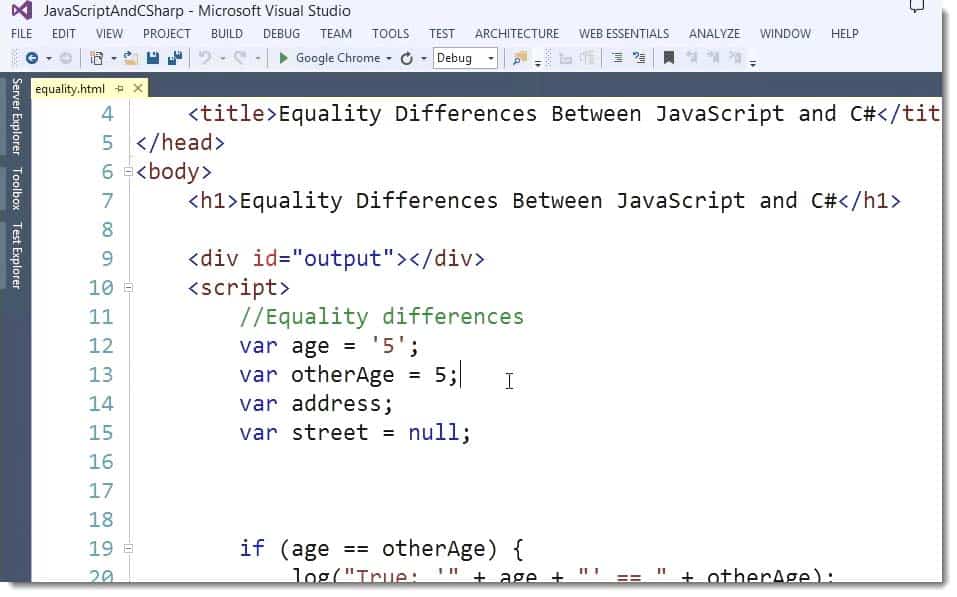 In C#, If I was to say, “Hey, does 5 equal 5 in this example?” You would probably say, “Of course not.” Well, in JavaScript it depends. With JavaScript, if I were to code like this: 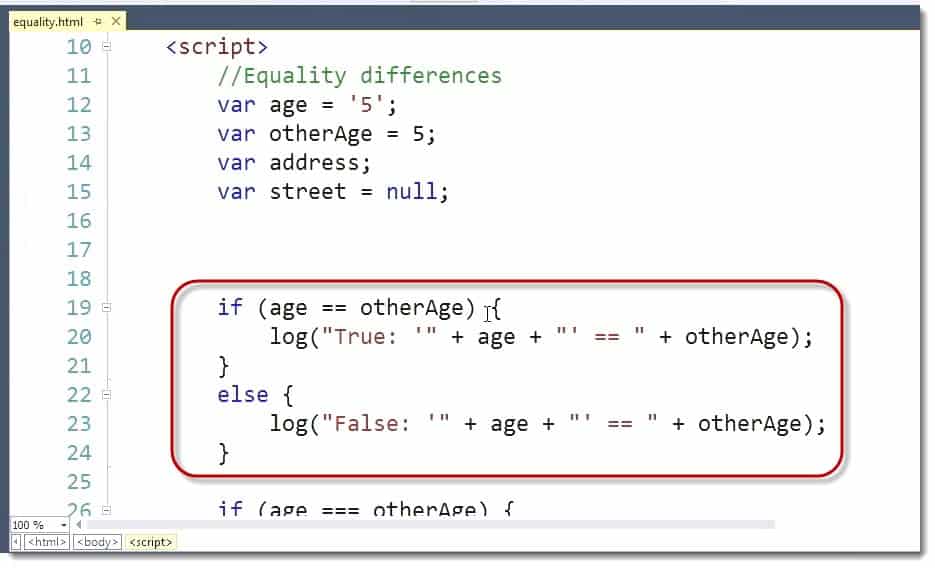 If age equals other age, with the normal double equals that we are used to for quality in C#. That actually will evaluate to true. That is a little bit shocking at first, if you’re brand new to JavaScript.

Well, that is not how it should be, at least in C#. But JavaScript will do some coercion. It will actually try to convert so that the data types can be compared. Technically 5 in quotes ‘ ‘  is equal to 5 here. 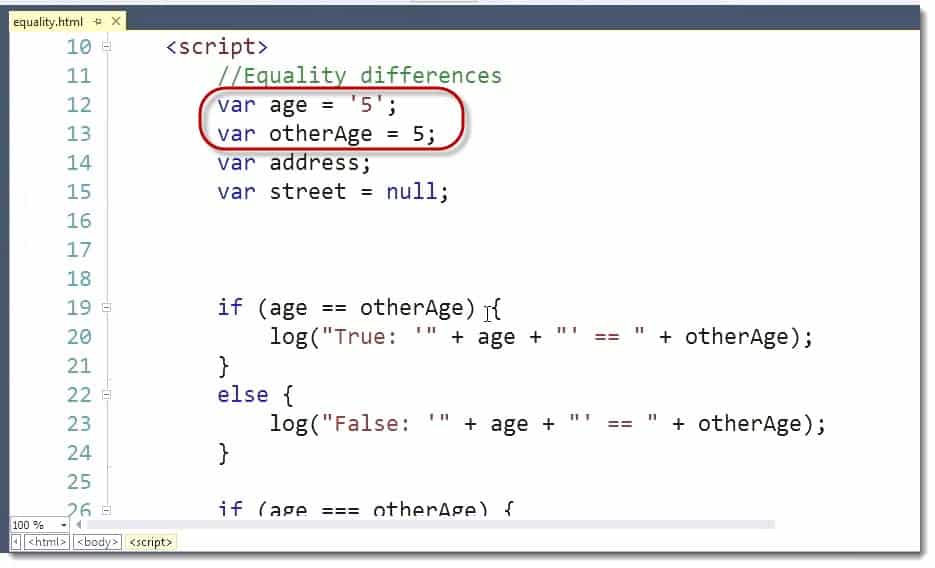 One other difference to point out is, if you’ll notice I used the single quotes ‘  ‘  like a character in C#.

In JavaScript, I can just as easily have done this with single or I could use double quotes “”.

Either way, it works. A lot of people (including myself) like the single quotes in JavaScript. That’s a pretty big jump if you are doing C# for the last five to ten years and are making the switch.

I mentioned undefined or null. You’ll notice address is not a signed value. If we actually to run this code right and we try to log the value of address, all it does is update the little bit of div at the top.

When I run this. It will show the output but the address is undefined, it doesn’t have a value.

That’s also different compared to C# because we don’t have an undefined in that rule.

Street however is null, it is a null pointer in memory. I’ll run this little page. 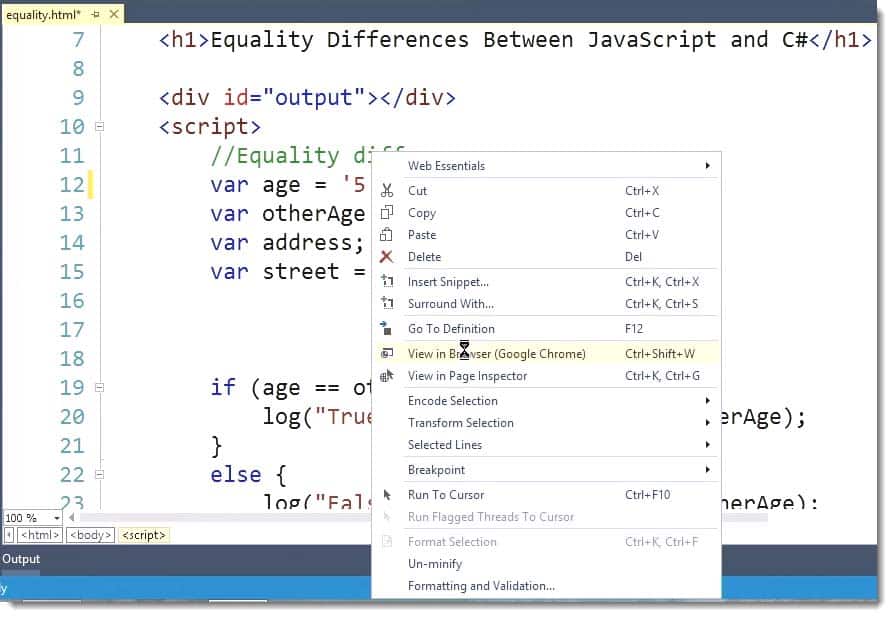 If we use the double quotes.

I don’t like languages that coheres my type to make them equal to each other. You want to stick with the triple equals in almost any app you do. It is little bit hard to remember that, if you are coming from C# world, but that’s a big deal.

That’s because it hasn’t been assigned a value yet, vs street, you can see is null that will be used to in C#. That would be one example of some of the differences.

You” notice I have a variable in JavaScript called “age”.

If we do an Alert, the alert is like a message box that pops up. It is going to show it is 55. But notice in this loop, I am defining a new “age” and using that “age” to actually loop through and then riding out age. 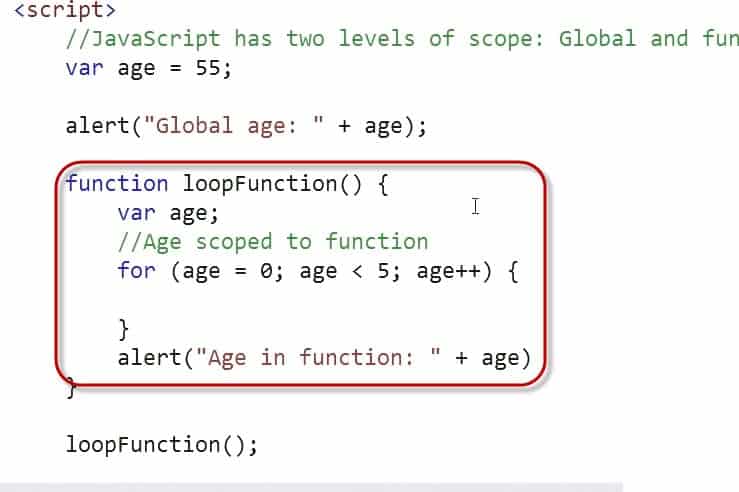 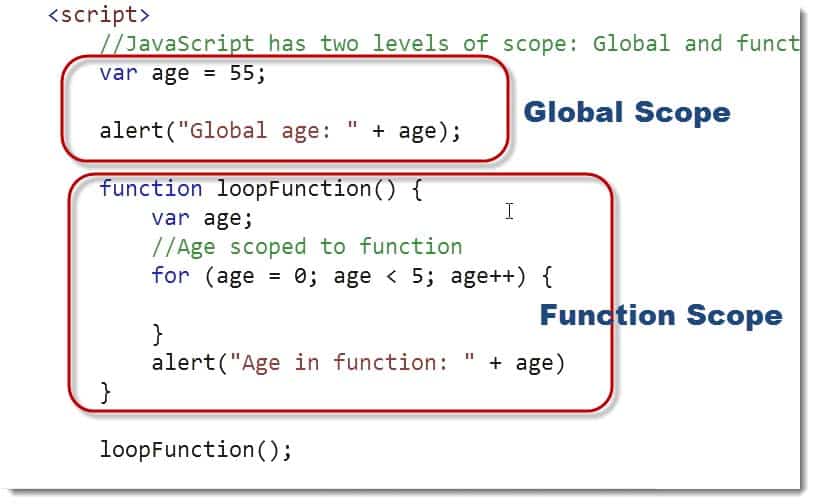 Then down here at the bottom, you’ll notice I’m doing a block.

Just four loops standing on its own. I am also redefining “age” as 0.

Let’s run it and let’s see.

We should get a three or so message boxes. You will see the first time it ran, global age was 55.

That’s what we would expect that would be correct. We’ll click “ok” and then, the internal one in the function, when it gets done looping, it was 5.

I would expect that. But notice the last one, it should have written out 55. Instead, it wrote 5. 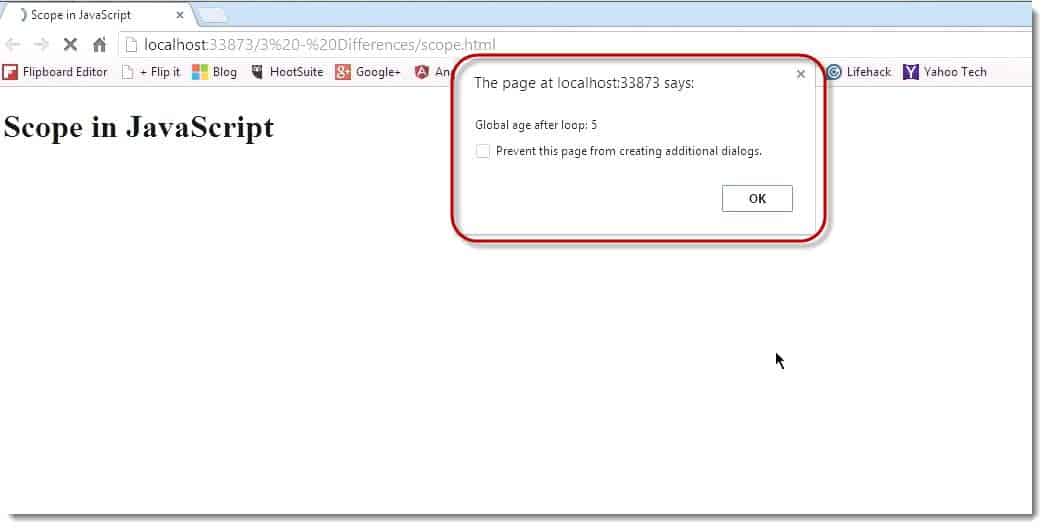 The reason is we over-load the value by doing “Var age” because there is no block level scope in JavaScript. 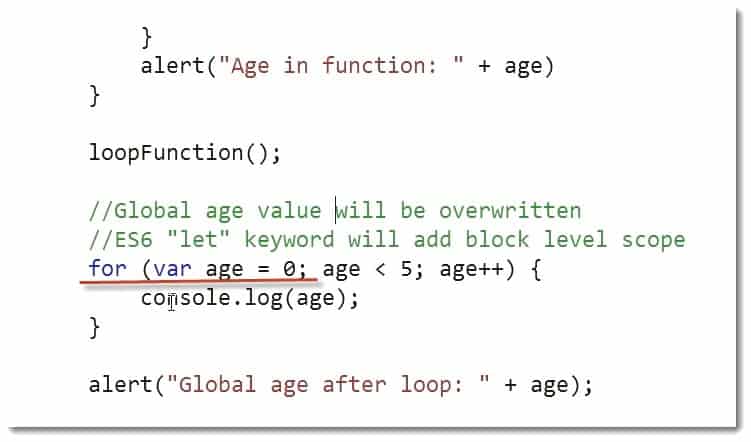 Now, you’re going to see that it’s going to change in ECMAScript 6. There’s a new keyword they are going to introduce called, “Let,” and that will make the age scope only to the block.

ECMAScript 6 will help with some of the problems with the scoping. But, that’s not quite ready for prime-time yet. That’s another difference that you’ll need to know about is the scoping in JavaScript.

Another big difference in Functions can totally stand on their own in the JavaScript world. Whereas in C#, you have to put your methods inside of your Class. 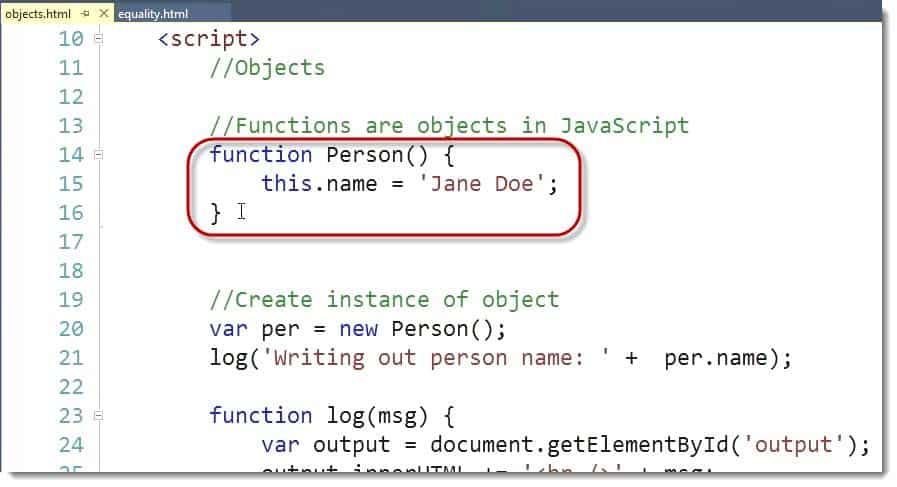 Well functions in JavaScript are actually objects. This little function definition for a person, you can think of that as like a class. Normally, add under that class, a property called name and assign it to Jane Doe.

Now I can move up that person, just like its regular class.

That’s definitely unique compared to the C# type of approach because we are used to classes and you move up to the class.

Because we don’t have classes in JavaScript, you can substitute this function approach because functions are objects. There is a lot of interesting things you can do. This would just write out Jane Doe, if we are to run this one.

The last and big difference between C# and JavaScript is inheritance. Because we don’t have classes and inheritance like Java or C#, we have to use what’s built into the language, and it is called prototypal inheritance. 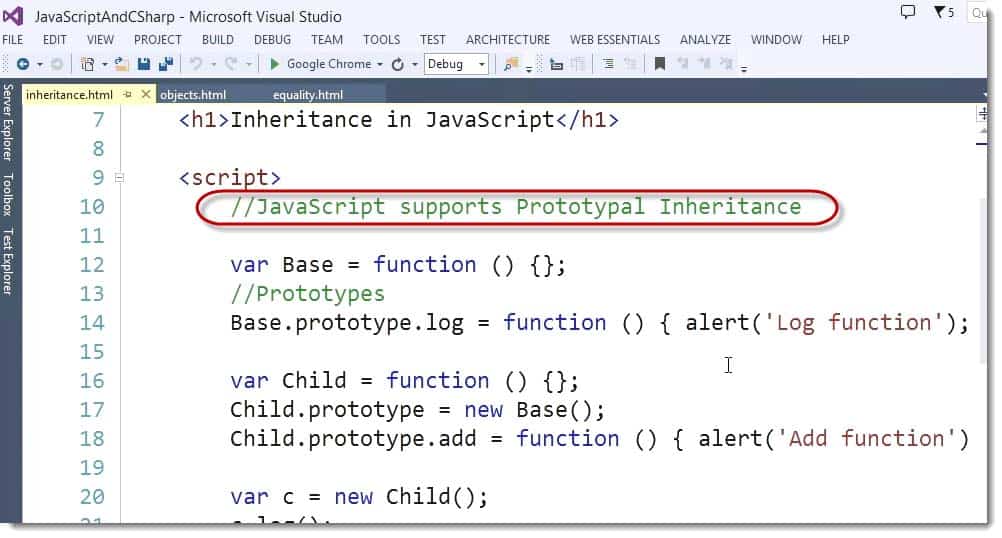 There is a prototype property that every object can hear it from the base object in JavaScript. You’ll notice in this case, we have an object called base.

It is a blueprint, it is like our class, if you will. Then off base, I am going to go to the prototype, that’s inherited from an object in JavaScript. I am going to add a log function that just does an alert when it’s run.

Now, let’s say that I have a child that needs to inherit the functionality from base and what we really want to do is, when the child is run, we call log. What will happen is, it will first look at the child and ask, “Do you have a log function?” If you do, it will call him. If you don’t, it will then walk up the hierarchy which we are going to create in the next line of code and say “Do you have a log function?”

Really, that’s going to make the prototype of the base object available here to our child.

After that, we are going to attach our own little add method. What is interesting here is, down in this code, when I call c.log after I move up the child, that’s going to look first in the child’s prototype and the local stuff and say “Do you have a log?”

It’s not going to find it. What it is going to do is, it’s going to walk up the prototype chain until it finds a prototype in a parent that has the log and then it would find this guy and then, it would run the function.

Unlike the “add” that you see in this example above, that actually would come in and just call the child’s add that’s on the child’s prototype itself.

Inheritance is totally different. This is one of the current ways that you can enable prototypal inheritance. ECMAScript 6 will be changing everything.

That’s a quick example of the few of the key differences and certainly there will be more I can cover, but that will get you thinking about how C# matches up.

Is JavaScript worth taking the time to learn if I’m a server-side .NET developer? How much of C# carries over to JavaScript? In this recorded video from Dan Wahlin’s webinar on September 24,2014, Dan answers these questions and more while also discussing similarities between the languages, key differences, and the future of JavaScript (ES6). If … END_OF_DOCUMENT_TOKEN_TO_BE_REPLACED

See our class schedule for complete Course Schedule Training. Classes are held in Phoenix, AZ and can be attended online from anywhere in the world with RemoteLive™. Instructor: Rick Trader  Video Transcription: One of the things that we might have to do in our corporate network is to take a class of IP addresses and then subnet that into … END_OF_DOCUMENT_TOKEN_TO_BE_REPLACED

One of the coolest new features in Window Server 2012 and Windows Server 2012 R2 is the ability to clone a Domain Controller. In the past, if we had virtualized Domain Controllers and we actually took a snapshot of it and then rolled back to that snapshot, it would break the logon service on that … END_OF_DOCUMENT_TOKEN_TO_BE_REPLACED